Nora Ventura (Ofelia Medina), matriarch of the Ventura family, awaits the return of her daughter, Cecilia (Anette Michel), who went to Monterrey for two years. But Cecilia returns home with a broken heart, because her boyfriend, Juan Pablo (Juan Pablo Medina), has been unfaithful to him; However, he decides to keep it a secret.

When Cecilia arrives at her house, she is received by all with great joy, but it soon becomes apparent that Eduardo (Jesús Vargas), Cecilia's father and Nora's husband, is cold with his wife; This is because he has been unfaithful for years. On the other hand, Sandra (Fran Meric), Daniel (Alberto Casanova) and Andrés (Luis Ernesto Franco), Cecilia's brothers, begin to suspect that their uncle Raul is making embezzlements.

Later, Cecilia meets in a park a young man named Maximiliano Miranda (Sergio Basañez), whom he falls in love with, and with whom he also coincides in his work. However, the joy and harmony of the Ventura will be truncated with the sudden death of Eduardo in a family reunion.

From that moment, the four brothers will be immersed in situations and circumstances that they had not imagined, because now they will have to work together to save the company, stay united and support Nora (Ofelia Medina), who will have to endure the presence of The lover of her late husband.

Sólo Para Mujeres is a Mexican theatre play. It has been running for about a decade. This show was inspired by the 1997 British film Full Monty.

Anette Michel Carrillo is a Mexican actress and model.

Se Busca un Hombre is a Spanish-language telenovela. The main theme of the series tells the story about private lives of a group of women who are frequent clients of “Angelica Style”, a prestigious beauty clinic. This group of women, Angelica, Nora, Mercedes, Samantha, Loreto, Vanesa, Lilí, Gabriela, Fernanda and Cecilia, have one thing in common: they have all failed to find the men of their dreams. As the stories blend, their different personalities are shown and their deepest wishes are revealed. They want to find a man who can understand them with freedom and love.

Cuando Seas Mía is a Mexican telenovela produced by TV Azteca. It was the second reunion for Silvia Navarro and Sergio Basañez as protagonists.

Morelia is a Mexican telenovela produced by José Enrique Crousillat and Malú Crousillat for Televisa in 1995. Alpha Acosta and Arturo Peniche starred as protagonists, while Cecilia Bolocco starred as the main antagonist.

La Heredera is a Mexican telenovela produced by TV Azteca. It marked the third reunion for Silvia Navarro and Sergio Basañez as protagonists. The series was then developed into an American telenovela by the title of American Heiress. 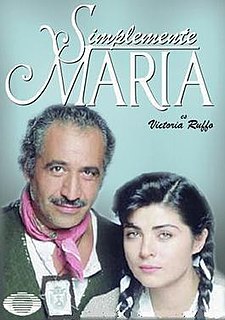 Simplemente María is a Mexican telenovela produced by Valentín Pimstein for Televisa in 1989. 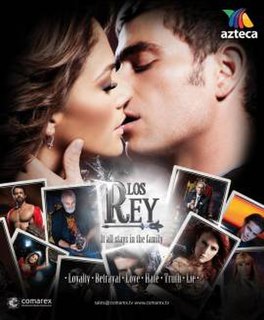 Laberintos de pasión is a Mexican telenovela produced by Ernesto Alonso for Televisa in 1999–2000.

Undercover Law is a Colombian drama television series produced by Caracol Televisión that premiered via streaming on 31 August 2018 on Netflix. It stars Viña Machado, Luna Baxter, Juana del Río, Valeria Galviz, Tommy Vásquez, Luis Mesa, Katherine Vélez, Variel Sánchez, Ricardo Vesga, y Juan Manuel Mendoza. The series is based on real-life facts of a group of women who make up a group of special police forces. The production of the series began on 30 October 2017 and is its available in 4K Ultra-high-definition television.