She is known for her melodious voice, she was honoured with India's fourth highest civilian award the Padma Shri by Government of India in 2005. [3] [5] She received Kalpana Chawla Excellence Award in 2007. [4] She was also awarded by the Government of Jammu and Kashmir on the Republic Day of 2010 in the field of performing arts. [6]

Shameema is one of the seven children of Abdullah Dev. She has six brothers. She is married to Ghulam Nabi Azad since 1980. [7] [8] 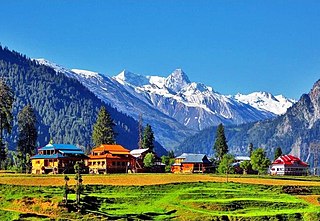 Azad Jammu and Kashmir, abbreviated as AJK and colloquially referred to as simply Azad Kashmir, is a region administered by Pakistan as a nominally self-governing entity and constituting the western portion of the larger Kashmir region, which has been the subject of a dispute between India and Pakistan since 1947. The territory shares a border to the north with Gilgit-Baltistan, together with which it is referred to by the United Nations and other international organizations as "Pakistani-administered Kashmir". Azad Kashmir also shares borders with the Pakistani provinces of Punjab and Khyber Pakhtunkhwa to the south and west, respectively. On its eastern side, Azad Kashmir is separated from the Indian union territory of Jammu and Kashmir by the Line of Control (LoC), which serves as the de facto border between the Indian- and Pakistani-controlled parts of Kashmir. Geographically, the administrative territory of Azad Jammu and Kashmir covers a total area of 13,297 km2 (5,134 sq mi) and has a total population of 4,045,366 as per the 2017 national census.

Mufti Mohammad Sayeed was a politician from the Indian state of Jammu and Kashmir. He started in the wing of the National Conference led by G. M. Sadiq, which later merged into the Indian National Congress, eventually founding his own regional party People's Democratic Party (PDP). He served twice as the Chief Minister of Jammu and Kashmir, from November 2002 to November 2005 and again from March 2015 to January 2016. He was also Minister of Tourism in Rajiv Gandhi's cabinet. He was also Home Minister of India from December 1989 to November 1990. The PDP continues to be a political force in Jammu and Kashmir, currently led by his daughter Mehbooba Mufti. 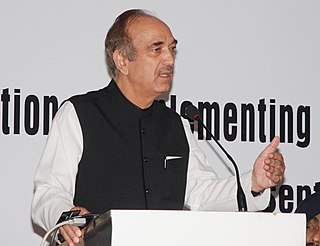 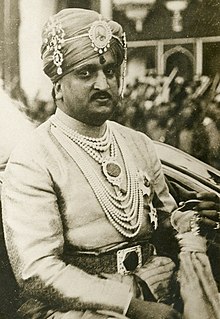 Maharaja Sir Hari Singh was the last ruling Maharaja of the princely state of Jammu and Kashmir.

Mian Bashir Ahmed Larvi was the eldest son of renowned saint Mian Nizam ud Din, the founder President of Gujjar-Jat Conference a socio political body established in 1932. He was a politician and a Caliph of Islamic Sufi order in Jammu and Kashmir. He was born in November 1923 in Pehalnar Wangat, Kangan Ganderbal Kashmir and died in August 2021 at the age of 97.

Ghulam Mohammad Shah or G.M. Shah was an Indian politician who was Chief Minister of the state of Jammu and Kashmir from 2 July 1984 to 6 March 1986. He succeeded his brother-in-law Farooq Abdullah. Shah's father-in-law was Sheikh Mohammad Abdullah, the founder of the Jammu and Kashmir National Conference, of which Shah was once a senior member. Shah died on 6 January 2009 at the Sher-e-Kashmir Institute of Medical Sciences in Srinagar. He was 88.

Chaudhry Ghulam Abbas was a leading politician of Jammu and Kashmir and the President of the Muslim Conference party. After his migration to Pakistan administered Kashmir in 1947, he became the head of the Azad Kashmir (AJK) government.

Qazigund railway station lies on Northern Railway network zone of Indian Railways. It is the main transport hub for the people of Qazigund.

S. P. Varma is a social worker and a peace activist from Jammu and Kashmir who has made exemplary contribution by spreading the message of peace in trouble-torn areas of the Kashmir valley. He met Nirmala Deshpande, an eminent Gandhian, at Jammu in 1990. Inspired by her work and dedication, he left his government job and dedicated himself to Gandhism.

Elections for the former Indian state of Jammu and Kashmir were held in September -October 2002 in four phases.

Ajaz Ahmad Khan popularly known as Ajaz Saab or Sher-e-Gool Gulabgarh is an Indian politician and was a member of the 10th, 11th and 12th Jammu and Kashmir Legislative Assembly from Gool Arnas constituency. He served as Minister of various portfolios from 2002 to 2014 in J&K Govt under the Chief Ministership of Mufti Mohammad Sayeed, Ghulam Nabi Azad and Omar Abdullah. He also served as Deputy Leader of Congress Legislative Party from 2014 to 2018 He left Congress and became founding member of Jammu and Kashmir Apni Party (JKAP) formed on 8 March 2020. He is also currently the Vice President of jammu kashmir apni party.

Abdul Gani Vakil is an Indian politician and vice-chairman of Jammu and Kashmir People's Conference. He has served the state as Minister for Social Welfare. 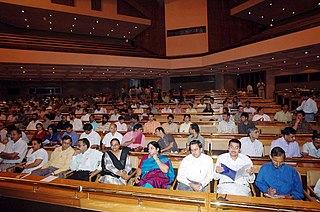 Bhalessa is a geographical area in the Doda district of the Jammu region in Jammu and Kashmir. It consists of the Bunjwah and Bhalessa Valleys, and comprises the three Tehsils of Kahara, Chilly Pingal and Gandoh.