psc is a post-nominal for Post Staff College in the Commonwealth militaries of Britain, Bangladesh, Indian, Sri Lanka and Pakistan. It indicates that an officer has undertaken the staff officer course at a Staff College. 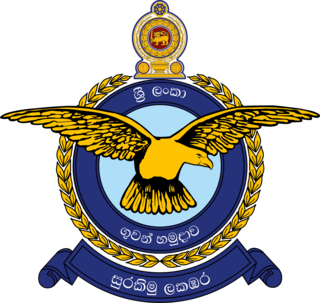 The Sri Lanka Air Force (SLAF) is the air arm and the youngest of the Sri Lanka Armed Forces. It was founded in 1951 as the Royal Ceylon Air Force (RCyAF) with the assistance of the Royal Air Force (RAF). The SLAF played a major role throughout the Sri Lankan Civil War. The SLAF operates more than 160 aircraft and has a projected trained strength of 27,400 airmen and 1,300 officers, who are from both regular and reserve service. The Sri Lanka Air Force has expanded to specialise mainly in providing air-support to ground forces, troop landing, and carrying out air strikes on rebel-held areas in the Northern and Eastern theatres, but is also capable of high- and low-level air defence. 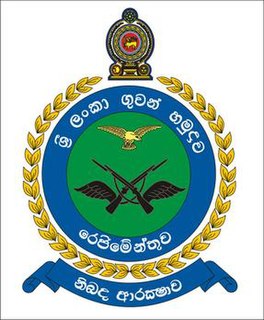 The Sri Lanka Air Force Regiment is a specialized ground combat corps within the Sri Lanka Air Force, responsible for capturing and defending airfields and associated installations. Its members are the SLAF Regiment Officers and the airmen of operations ground specialization. The SLAF Regiment is fully capable of protecting all its air bases, installations by itself using infantry and light armored units as well as launch air assaults with Airborne Infantry elements (paratroopers). Ground-based air defense of vital military and civil installations around the country is carried out by the SLAF Regiment along with combat search and rescue missions (CSAR). The corps itself is simply known as the 'regiment'.

Air Chief Marshal Jayalath Weerakkody RWP, VSV, USP, ndc, psc, SLAF is a retired Sri Lanka Air Force air officer who served as commander of the Air Force from 1999 to 2002. In 2007 he was promoted to the rank of Air Chief Marshal along with nine other former service chiefs. He is the current Sri Lankan High Commissioner to Pakistan. 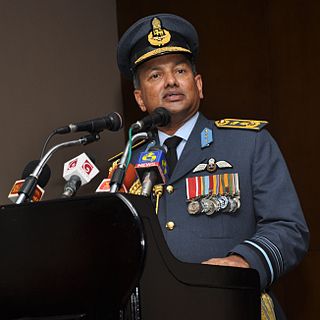 Air Chief Marshal Harsha Abeywickrema, RWP, RSP, VSV, USP, rcds, psc, qfi is a senior Sri Lankan air force officer and fighter pilot, who served as the Commander of the Sri Lankan Air Force from 2012 to 2014 and later went on to serve as a Chairman of the Bank of Ceylon. 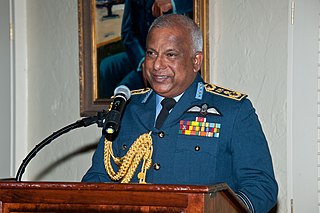 Air Chief Marshal Gagan Bulathsinghala RWP, RSP, VSV, USP, MPhil, MSc in Mgt, FIM(SL) ndc, psc is a retired air officer and a former Commander of the Sri Lanka Air Force. He has also held the position of Chief of the Air Staff and, after his retirement on 12 September 2016, was appointed the Sri Lankan Ambassador to Afghanistan- a position he holds currently.