St. Michel–Auber93 ( UCI team code:AUB) is a UCI Continental cycling team based in France. The team is managed by Stephane Javalet with the help of Guy Gallopin and Stephan Gaudry. [1]

Allan Johansen is a Danish former professional road bicycle racer. He became professional in 1998 for Team Chicky World, before moving to Memory Card–Jack & Jones in 2000. Johansen continued at Team Fakta from 2001 to 2003 then to BankGiroLoterij in 2004, before returning to Team CSC in 2005, where remained until the end of 2007. In 2008 he joined Team Designa Køkken. Johansen retired in 2009 ending his career with the 2009 Danmark Rundt when he was awarded the fighters award for the race. He rode in the 2000 Tour de France, and finished 119th overall. He also finished 125th in the 2005 Vuelta a España. 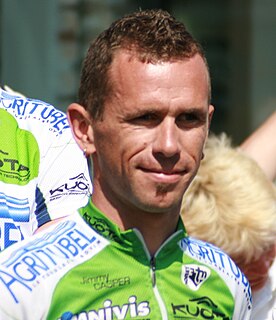 Jimmy Casper is a French retired road bicycle racer, who competed as a professional between 1998 and 2012. He is best known for winning stage 1 of 2006 Tour de France.

Joker Fuel of Norway is a UCI Continental cycling team based in Norway. The team is managed by Birger Hungerholdt with assistance from directeur sportifs Gino van Oudehove and Anders Linnestad. The team has had well known riders, including Alexander Kristoff who rode for the team from 2007–2009, and Edvald Boasson Hagen who joined the team in 2006 Maxbo–Bianchi and in his first season in the continental circuits he took eight wins including three stages of the Tour de l'Avenir.

Mathieu Drujon is a French road bicycle racer for St. Michel–Auber93. Drujon will retire at the end of the 2013 season, after six years as a professional.

Stéphane Bonsergent is a former French professional racing cyclist, who competed as a professional with the Bretagne–Schuller team, between 2006 and 2011.

Sojasun was a French cycling team registered at UCI Professional Continental level. They were founded in 2009 as Besson Chaussures-Sojasun. The team rode BH bicycles. Their sponsor Sojasun is a company which manufactures soya-based foods.

Alo Jakin is an Estonian former professional cyclist, who rode professionally between 2006 and 2007 and from 2014 to 2019. In his final professional season, Jakin won his second Estonian National Road Race Championships title and also won a silver medal in the road race at the European Games.

Circus–Wanty Gobert is a UCI Professional Continental men's cycling team founded in 2008. It is based in Belgium and it participates in races on the UCI Continental Circuits, and some UCI World Tour events.

Arkéa–Samsic is a Professional Continental cycling team based in Rennes, France that participates in UCI Continental Circuits races and UCI World Tour races when receiving a wild card. The team was founded in 2005 and in 2013 the main sponsor became Séché Environnement, a French waste treatment company.

Bingoal–Wallonie Bruxelles is a UCI Professional Continental team founded in 2011 and based in Belgium. It participates in UCI Continental Circuits races.

Vérandas Willems–Crelan was a UCI Professional Continental team founded in 2013 and based in Belgium. During the winter the team is active in cyclo-cross. Former team member Michael Goolaerts died following a cardiac arrest at the 2018 Paris–Roubaix in France. In August 2018 it was announced that the team would merge with Roompot–Nederlandse Loterij for the 2019 season under the name Roompot-Crelan.

Steven Tronet is a French cyclist riding for Natura4Ever–Roubaix–Lille Métropole. 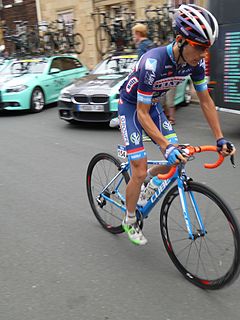 Guillaume Martin is a French cyclist, who currently rides for UCI WorldTeam Cofidis. In June 2017, he was named in the startlist for the Tour de France.

Bryan Alaphilippe is a French cyclist, who currently rides for UCI Continental team St. Michel–Auber93. He is the younger brother of Julian Alaphilippe.