Tania is a name, and may refer to several real or fictional people, such as: 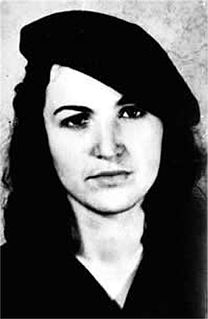 Haydée Tamara Bunke Bider, better known as Tania or Tania the Guerrilla, was an Argentine-born East German communist revolutionary and spy who played a prominent role in the Cuban government after the Cuban Revolution and in various Latin American revolutionary movements. She fought alongside Marxist guerrillas under Che Guevara during the Bolivian Insurgency (1966–1967) where she was killed in an ambush by CIA-assisted Bolivian Army Rangers.

Monica may refer to:

Thomasina or Thomasine is the feminine form of the given name Thomas, which means "twin". Thomasina is often shortened to Tamsin. Tamsin can be used as a name in itself; variants of Tamsin include Tamsyn, Tamzin, Tamsen, Tammi and Tamasin. Although Aramaic in origin, the version "Tamsin" is especially popular in Cornwall and Wales. Along with Tamara it is the ancestor of "Tammy".

Paterson is a Scottish and Irish surname meaning "Fathers' son" or "son of Patrick". In Connacht, and Ulster, the name is considered to be an Anglicised form of the Irish language surname Ó Casáin. Paterson is rarely used as a given name. There are other spellings, including Patterson. Notable people with the surname include:

Tanya is the Slavic hypocoristic of Tatiana. It is now quite commonly used as an independent given name in the English-speaking world.

Tamara is a female given name most commonly derived from the Biblical name "Tamar" and in the Arabic from the singular form "Tamra" and the plural form “Tamar”, meaning in both Hebrew and Arabic by the generic name of the fruit meaning "date", "date palm" or "palm tree".

Megan is a Welsh female given name, originally a pet form of Meg or Meggie, which is itself a short form of Margaret. Margaret is from the Greek μαργαρίτης (margaritēs) for "pearl". Megan is one of the most popular Welsh names in Wales and England; it is commonly truncated to Meg. Nowadays, it is generally used as an independent name rather than as a nickname.

Gabby is a given name, usually a short form of Gabriel or Gabrielle or Gabriella.

Zhōu is the Hanyu Pinyin transliteration of the Chinese family name 周, which ranks as the 10th most common surname in Mainland China as of 2019. In 2013 it was found to be the 10th most common name, shared by 25,200,000 people or 1.900% of the population, with the province with the most being Hunan. Derived from the Zhou dynasty, it has been one of the ten most common surnames in China since the Yuan dynasty. It is the 5th name on the Hundred Family Surnames poem.

Rina or RINA may refer to:

Alice is most often used as a feminine given name, used primarily in English and French; however, it has proven popular in some other languages. It is also used as a surname.

The surname Wolfe may refer to:

Lorena is a German, English, Croatian, Italian, Portuguese and Spanish feminine given name with different origins. It can be used as an version of Lorraine or, alternately, as a Latin version of Lauren. As a Croatian, Italian, Portuguese and Spanish name, it is derived from the Latin Laurentius. As a German and English name, it is a modern form of the Germanic Chlothar. As used in the United States, it may have come from the song title of a popular 1856 song by Rev. Henry D.L. Webster and Joseph Philbrick Webster, who are said to have derived the name from an anagram of the name Lenore, a character in Edgar Allan Poe's 1845 poem The Raven. In Margaret Mitchell's 1936 novel Gone with the Wind, Scarlett O'Hara's daughter with Frank Kennedy was named Ella Lorena in reference to the song Lorena. Frank G. Slaughter wrote a book called Lorena in which the character was also called Reeny hence the alternative pronunciation of Lor ee na.

Trisha is a unisex given name, usually derived from the female Latin given name Patricia.

Marie is the French form of Mary, directly derived from Latin Maria.

Haydée is an opéra comique by Daniel Auber.

Helena is the Latin form of Helen. People with this name include:

Eleni is a feminine given name of Greek origin. It is a phonetic spelling of the Modern Greek name "Ελένη", whose ancient version, Ἑλένη, is anglicized as Helen. Popular diminutives and nicknames include: Elenitsa, Elenaki, Elena, Lena, Lenio, Lenners, Nitsa.

Celeste or Céleste is a given name or surname which derives from the Latin caelestis, meaning heavenly or celestial.