West of the Caprock Escarpment and North and South of the Canadian River breaks, the surface of the Llano Estacado is rather flat. South of the city of Amarillo, the level terrain gives way to Palo Duro Canyon, the second-largest canyon in the United States. This colorful canyon was carved by the Prairie Dog Town Fork Red River. North of Amarillo lies Lake Meredith, a reservoir created by Sanford Dam on the Canadian River. The lake, along with the Ogallala Aquifer, provides drinking water and irrigation for this moderately dry area of the High Plains.

The Texas Panhandle has been identified in the early 21st century as one of the fastest-growing windpower-producing regions in the nation because of its strong, steady winds. [1]

Before the rise of Amarillo, the three original towns of the Panhandle were Clarendon in Donley County, Mobeetie in Wheeler County, and Tascosa in Oldham County. Clarendon moved itself after it was overlooked by the Fort Worth and Denver Railroad. Mobeetie was reduced even below its original small size with the closure of the United States Army's Fort Elliott in 1890. Tascosa was ruined by the location of the railroad too far North of the town and the inability to build a feeder line. The Tascosa Pioneer wrote in 1890: "Truly this is a world which has no regard for the established order of things but knocks them sky west and crooked, and lo, the upstart hath the land and its fatness." [2]

The 26 northernmost counties that make up the Texas Panhandle include: [3] [4]

Major cities of the Texas Panhandle with populations greater than 10,000 include:

Some of the smaller towns with populations less than 10,000 include:

Much like the rest of West Texas and the Oklahoma Panhandle, the region is very politically and socially conservative. Following the pattern of other larger cities, Amarillo has the largest liberal population in the Panhandle. It was one of the first regions of the state to break away from its Democratic roots, though Democrats continued to do well at the local level well into the 1980s. However, Republicans now dominate every level of government, holding nearly every elected post above the county level.

In the 2016 Presidential election, Donald Trump received 79.9% of the vote in the 13th District, as compared with Hillary Clinton's 16.9% share of the vote.

Swisher County is a county located in the U.S. state of Texas. As of the 2010 census, its population was 7,854. Its county seat is Tulia. The county was created in 1876 and later organized in 1890. It is named for James G. Swisher, a soldier of the Texas Revolution and signer of the Texas Declaration of Independence.

Oldham County is a county located in the U.S. state of Texas. As of the 2010 census, its population was 2,052. Its county seat is Vega. The county was created in 1876 and organized in 1881. Oldham County is included in the Amarillo, TX Metropolitan Statistical Area. 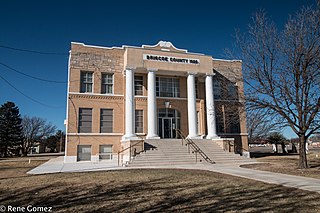 Briscoe County is a county located in the U.S. state of Texas. As of 2010 census, the population was 1,637. Its county seat is Silverton. The county was created in 1876 and later organized in 1892. It is named for Andrew Briscoe, a soldier during the Texas Revolution.

Clarendon is a city in Donley County, Texas, United States. The population was 2,026 at the 2010 census. The county seat of Donley County, Clarendon is located on U.S. Highway 287 in the Texas Panhandle, 60 miles (97 km) east of Amarillo. 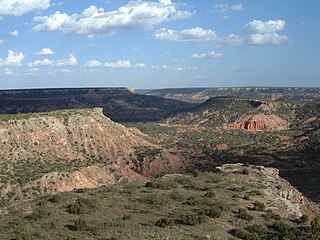 The South Plains is region in northwest Texas, consisting of 24 counties. The main crop is cotton. 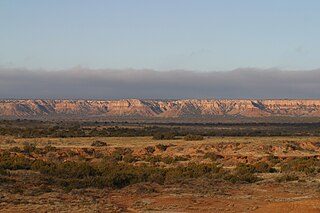 The Caprock Escarpment is a term used in West Texas and Eastern New Mexico to describe the geographical transition point between the level high plains of the Llano Estacado and the surrounding rolling terrain. In Texas, the escarpment stretches around 200 mi (320 km) south-southwest from the northeast corner of the Texas Panhandle near the Oklahoma border. The escarpment is especially notable, from north to south, in Briscoe, Floyd, Motley, Crosby, Dickens, Garza, and Borden Counties. In New Mexico, a prominent escarpment exists along the northernmost extension of the Llano Estacado, especially to the south of San Jon and Tucumcari, both in Quay County, New Mexico. Along the western edge of the Llano Estacado, the portion of the escarpment that stretches from Caprock to Maljamar, New Mexico is called the Mescalero Ridge.

Caprock Canyons State Park and Trailway is a Texas state park located along the eastern edge of the Llano Estacado in Briscoe County, Texas, United States, approximately 100 miles (160 km) southeast of Amarillo. The state park opened in 1982 and is 15,314 acres (6,197 ha) in size, making it the third-largest state park in Texas.

North American area code 806 is a state of Texas telephone area code for numbers in the Texas Panhandle and South Plains, including the cities of Amarillo and Lubbock. 806 was created as a flash-cut sometime during 1957, but available databases do not indicate from which area code it was split, as all original area codes were created in October 1947. Based on proximity, however, it was probably split from the 915 area code. In a message posted to the Telecom Digest mailing list and newsgroup comp.dcom.telecom, Carl Moore reports that this area code was created mostly in part from area code 915 as well as a small part from area code 817. Of the six area codes serving Texas from 1957 to 1983, this is currently the only one that has yet to need any type of relief through division or an overlay.

The Panhandle Regional Planning Commission (PRPC) is a voluntary association of cities, counties and special districts in the Texas Panhandle.

Harold Dow Bugbee was an American Western artist, illustrator, painter, and curator of the Panhandle-Plains Historical Museum in Canyon, Texas. Bugbee sought with considerable success to become the dominant artist of the Texas South Plains, as his role model, Charles M. Russell of Montana, accordingly sketched life of the northern Great Plains. 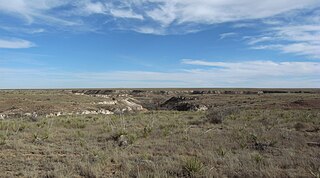 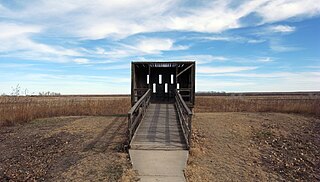 Tascosa, sometimes called Old Tascosa, is the former capital of ten counties in the Texas Panhandle. The town emerged briefly in the 1880s as an economic rival of Dodge City, Kansas. Located in Oldham County northwest of Amarillo, Texas, Tascosa is now a ghost town. 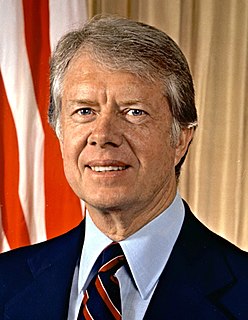