Printworks may refer to:

Printworks is a nightclub and events venue in Rotherhithe, South London. It is located in the former Harmsworth Quays printing plant, which printed newspapers including the Daily Mail and Evening Standard until 2012. 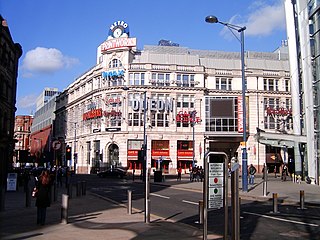 Leeds City College is the largest further education establishment in the City of Leeds, West Yorkshire, England, with around 26,000 students, 2,300 staff and an annual turnover of £78 million. It officially opened on 1 April 2009. The College was granted official status in January 2009 and was formed from three large colleges, Park Lane College, Leeds Thomas Danby College and Leeds College of Technology. The college is a member of the Collab Group of 35 high performing state sixth form colleges and colleges of further education. 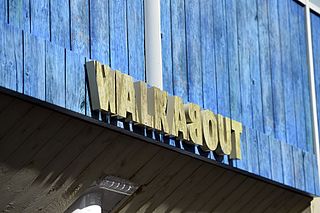 Walkabout is an Australian themed pub and restaurant chain in the United Kingdom owned by Stonegate pubs since December 2016.

Sir Nicholas Grimshaw, CBE, PPRA is a prominent English architect, particularly noted for several modernist buildings, including London's Waterloo International railway station and the Eden Project in Cornwall. He was President of the Royal Academy from 2004 to 2011. He was chairman of Grimshaw Architects from its foundation to 2019, when he was succeeded by Andrew Whalley. He is a recipient of the RIBA Gold Medal. 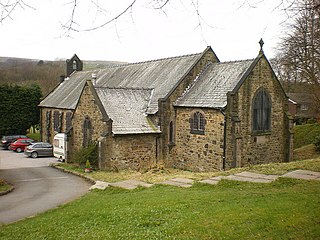 Stubbins is an industrial village in the southern part of the Rossendale Valley, Lancashire, England.

Parkhurst Forest is a woodland to the north-west of Newport, Isle of Wight, England.

Exchange Square is civic square in Manchester, England. The square was created after the IRA 1996 Manchester bombing. This reconstruction included the structural relocation of two pubs to make room for the new Marks & Spencer store.

Merton Abbey Mills is a former textile factory in the parish of Merton in London, England near the site of the medieval Merton Priory, now the home of a variety of businesses, mostly retailers. 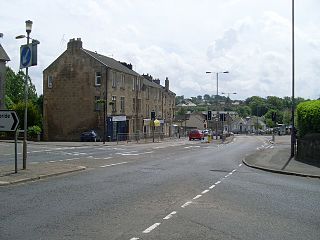 Busby is a village in East Renfrewshire, Scotland. Busby's close proximity to Glasgow effectively makes it a suburb of the city, though it remains administratively separate. It lies on the White Cart Water 6 miles (9.7 km) south of Glasgow City Centre. 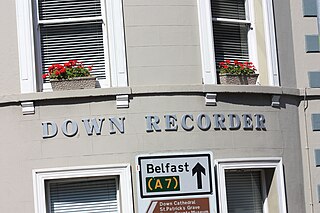 The Down Recorder is a weekly newspaper published in Downpatrick, County Down, Northern Ireland. It is owned by W.Y. Crichton & Co.

Rufisque Department is one of the 45 departments of Senegal and one of the four which make up the Dakar Region.

Leeds Thomas Danby was a further education college in Leeds, West Yorkshire, England offering courses for 16- to 18-year-olds and adults. The college was named after the first Mayor of Leeds, Captain Thomas Danby of Farnley. On 1 April 2009, Leeds Thomas Danby merged with Park Lane College and the Leeds College of Technology to form the new Leeds City College.

The North Wales Weekly News is one of a group of newspapers published weekly in Llandudno.

Vera Berdich was an American printmaker.

The Alf Cooke printworks is a grade II listed former industrial building by Thomas Ambler, now the Printworks Campus of Leeds City College in Leeds, West Yorkshire, England. It was built in 1881 and rebuilt after a fire in 1894.

University Technical College Leeds is a university technical college (UTC) in Hunslet, Leeds, England, which opened in September 2016. The UTC is sponsored by the University of Leeds and several local employers.