Thomas Pollard was christened on 11 December 1597 in Aylesbury, Buckinghamshire. His date of death is not known.

Pollard starting as a boy player specializing in women's roles. He was trained by John Shank, a noted comic actor; and after he matured and left female roles behind, Pollard acquired his own reputation as a gifted comic performer. His most notable part was the title role in Fletcher's The Humorous Lieutenant . He had the comical role of Timentes the cowardly general in Arthur Wilson's The Swisser .

He played Silvio in Webster's The Duchess of Malfi , in the productions of c. 1614 and c. 1621. [2] He appeared in Shakespeare's Henry VIII , probably in the 1628 revival at the Globe Theatre. Pollard played the role of Pinac in The Wild Goose Chase in the 1632 revival, and was in a number of other Fletcherian plays, The Lovers' Progress , The Maid in the Mill , The Queen of Corinth , Sir John van Olden Barnavelt , and The Spanish Curate .

Pollard acted parts in plays by Philip Massinger, including The Roman Actor (Aelius Lamia and Stephanus), Believe as You List (Berecinthius), and The Picture (Ubaldo). He also acted in works by John Ford, including The Laws of Candy and The Lover's Melancholy ; and by James Shirley, including The Cardinal . He "doubled" several small parts in John Clavell's The Soddered Citizen (1630).

(The text of Believe as You List draws humor from the fatness of Berecinthius, the character played by Pollard. By 1631, the year the play was acted, Pollard seems to have grown corpulent.)

Pollard was intimately involved in a major controversy that marked the King's Men company in the 1630s. When the troupe had acquired its two theatres, the Globe (1598–99) and the Blackfriars (1608), prominent members of the company-owned shares in the theatres, and so gained additional shares in their profits, beyond what they earned as actors. They were termed "housekeepers" of the theatres. Over the next generation, actors died and passed their shares to their heirs; their replacements, in the next generation of actors, were cut out of the housekeepers' income (though as sharers in the acting company, they received their own portions of the profits). In 1635, three prominent actors, Pollard, Eliard Swanston, and Robert Benfield, petitioned the Lord Chancellor, Philip Herbert, 4th Earl of Pembroke, to be allowed to purchase theatre shares from the present housekeepers; and Pembroke agreed.

Those existing shareholders, principally Cuthbert Burbage and John Shank, did not want to sell their lucrative shares, however. The dispute generated a body of documents, sometimes called the Sharers' Papers, that reveal valuable information on the theatrical conditions of the Caroline era. [3] The Sharers' Papers indicate that Pollard had an annual income of £180 at the time, purely as a sharer in the acting company.

Pollard continued with the company even after the closing of the London theatres in September 1642, at the start of the English Civil War. He was one of the ten King's Men who signed the dedication to the first Beaumont and Fletcher folio of 1647, and one of the seven who tried to re-activate the company in 1648. He was also one of the performers arrested on 1 January 1649, when soldiers of the Commonwealth regime raided the Cockpit Theatre and caught actors in the midst of an illegal performance – of Rollo Duke of Normandy , as chance had it. Pollard was playing the Cook. The actors spent a short time incarcerated in Hatton House, then were released. [4]

The Interregnum years were rough-and-tumble for unemployed or under-employed actors. In 1655 Theophilus Bird filed a lawsuit that claimed that Pollard and fellow King's Man Michael Bowyer, along with "some others", had sold the company's playbooks and its expensive costumes, and owed Bird a share in the proceeds. [5] Bird claimed in his 1655 suit that Pollard was worth £500 when he died; but the date of his death is unknown. James Wright's Historia Histrionica (1699) states that Pollard "Lived Single, and Had a Competent Estate; Retired to some relations he had in the Country, and there ended his Life". [6]

James Burbage was an English actor, theatre impresario, joiner, and theatre builder in the English Renaissance theatre. He built The Theatre, the first permanent dedicated theatre built in England since Roman times.

The King's Men is the acting company to which William Shakespeare (1564–1616) belonged for most of his career. Formerly known as the Lord Chamberlain's Men during the reign of Queen Elizabeth I, they became the King's Men in 1603 when King James I ascended the throne and became the company's patron. 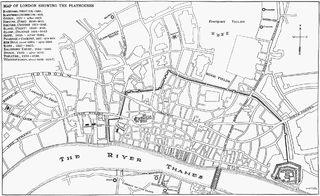 Blackfriars Theatre was the name given to two separate theatres located in the former Blackfriars Dominican priory in the City of London during the Renaissance. The first theatre began as a venue for the Children of the Chapel Royal, child actors associated with the Queen's chapel choirs, and who from 1576 to 1584 staged plays in the vast hall of the former monastery. The second theatre dates from the purchase of the upper part of the priory and another building by James Burbage in 1596, which included the Parliament Chamber on the upper floor that was converted into the playhouse. The Children of the Chapel played in the theatre beginning in the autumn of 1600 until the King's Men took over in 1608. They successfully used it as their winter playhouse until all the theatres were closed in 1642 when the English Civil War began.

In Renaissance-era London, playing company was the usual term for a company of actors. These companies were organised around a group of ten or so shareholders, who performed in the plays but were also responsible for management. The sharers employed "hired men" – that is, the minor actors and the workers behind the scenes. The major companies were based at specific theatres in London; the most successful of them, William Shakespeare's company the King's Men, had the open-air Globe Theatre for summer seasons and the enclosed Blackfriars Theatre in the winters. The Admiral's Men occupied the Rose Theatre in the 1590s, and the Fortune Theatre in the early 17th century.

The Earl of Pembroke's Men was an Elizabethan era playing company, or troupe of actors, in English Renaissance theatre. They functioned under the patronage of Henry Herbert, 2nd Earl of Pembroke. Early and equivocal mentions of a Pembroke's company reach as far back as 1575; but the company is known for certain to have been in existence in 1592. In that year, a share in the company was valued at £80.

Thomas Pope was an Elizabethan actor, a member of the Lord Chamberlain's Men and a colleague of William Shakespeare. Pope was a "comedian and acrobat."

Joseph Taylor was a 17th-century English actor. As the successor of Richard Burbage as the leading actor with the King's Men, he was arguably the most important actor in the later Jacobean and the Caroline eras.

Prince Charles's Men was a playing company or troupe of actors in Jacobean and Caroline England. 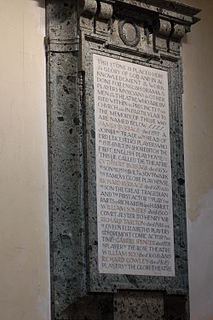 Richard Cowley was an actor in English Renaissance theatre, a colleague of William Shakespeare and Richard Burbage in the Lord Chamberlain's Men and the King's Men.

Francis Langley (1548–1602) was a theatre builder and theatrical producer in Elizabethan era London. After James Burbage and Philip Henslowe, Langley was the third significant entrepreneurial figure active at the height of the development of English Renaissance theatre.

Robert Benfield was a seventeenth-century actor, noted for his longtime membership in the King's Men in the years and decades after William Shakespeare's retirement and death.

Eliard Swanston, alternatively spelled Heliard, Hilliard, Elyard, Ellyardt, Ellyaerdt, and Eyloerdt, was an English actor in the Caroline era. He became a leading man in the King's Men, the company of William Shakespeare and Richard Burbage, in the final phase of its existence.

John Shank was an actor in English Renaissance theatre, a leading comedian in the King's Men during the 1620s and 1630s.

John Underwood was an early 17th-century actor, a member of the King's Men, the theatrics company of William Shakespeare.

King's Men personnel were the people who worked with and for the Lord Chamberlain's Men and the King's Men from 1594 to 1642. The company was the major theatrical enterprise of its era and featured some of the leading actors of their generation – Richard Burbage, John Lowin, and Joseph Taylor among other – and some leading clowns and comedians, like Will Kempe and Robert Armin. The company benefitted from the services of William Shakespeare, John Fletcher, and Philip Massinger as regular dramatists.