Thomas Ashburn was born at East Walnut Hills, Cincinnati, Ohio. He was the oldest of seven children of Richard Ashburn and Mary (Williams) Ashburn. [1] The family soon moved to New Richmond, Clermont County, Ohio, where Thomas grew up. [2]

Ashburn entered Miami University in 1838, and stayed for about eighteen months. He then taught school in New Richmond for two winters and spent his summers at farm labor. [1] In 1841 he entered Jefferson College at Canonsburg, Pennsylvania, where he stayed through half his junior year. [1] He then taught school again in Clermont County, and studied law at the Batavia, Ohio office of Shields & Howard, attorneys at that place. [1] [2]

Ashburn resigned from the Common Pleas Court in 1876, when he was appointed to the Supreme Court Commission of Ohio for a three year term by Governor Rutherford B. Hayes. [5] [6]

In February, 1879, after the commission was dissolved, Ashburn entered a partnership with George W. Hulick of Batavia, which continued until his death. In November 1889, he was elected to the Ohio State Senate as a Democrat. The session began January 6, 1890, [7] and a dying Ashburn was carried into the chambers to vote for Calvin S. Brice for United States Senator on January 14 and 15. [2] [8] He died January 17, 1890. [2]

Batavia is a village in and the county seat of Clermont County, Ohio, United States. The population was 1,509 at the 2010 census. 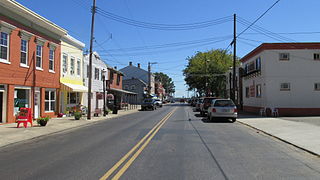 New Richmond, also known as New Richmond on the Ohio, is a village in Ohio and Pierce townships in Clermont County, Ohio, United States, founded in 1814, along the Ohio River. The population was 2,582 at the 2010 census.

The U.S. state of Ohio has a Supreme Court of seven members, who are elected for six-year terms. See also:

Richard Almgill Harrison was a nineteenth-century politician and lawyer from Ohio.

Reader Wright Clarke was a U.S. Representative from Ohio.

Hugh Llewellyn Nichols was an American politician who served as the 32nd Lieutenant Governor of Ohio from 1911 to 1913 and Chief Justice, Supreme Court of Ohio 1913 to 1920.

John Waterman Okey was a judge and legal author in the U.S. State of Ohio who was an Ohio Supreme Court Judge 1878–1885. He was a member of the Democratic Party

Selwyn N. Owen was a Democratic lawyer in the U.S. State of Ohio who was a judge on the Ohio Supreme Court 1883–1889.

William B. Caldwell was a Democratic Party jurist in the U.S. state of Ohio who sat on the Ohio Supreme Court 1849–1854.

Robert Bruce Warden was a Democratic Party jurist in the U.S. state of Ohio who sat on the Ohio Supreme Court for a short time 1854–1855. He also authored biographies of Salmon P. Chase and Stephen A. Douglas.

John A. Corwin was a Democratic politician and jurist from Ohio, United States. He was elected to the Ohio Supreme Court and ran unsuccessfully for the United States House of Representatives.

Nathaniel Clark Reed or Read was a lawyer from the U.S. state of Ohio who sat on the Ohio Supreme Court for seven years.

The First Ohio General Assembly was the initial meeting of the Ohio state legislature, composed of the Ohio State Senate and the Ohio House of Representatives. It convened in Chillicothe, Ohio, on March 1, 1803, and adjourned April 16, 1803. This General Assembly coincided with the first year of Edward Tiffin's first term as Ohio Governor.

Charles Anthony (1798–1862) was a legislative leader in the U.S. State of Ohio. He was also a Militia General during the Mexican–American War, a Masonic Grand Master for his state, and a U.S. Attorney. 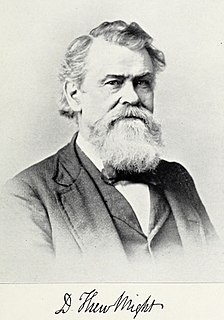 John McCauley of Seneca County, Ohio was a Justice serving on the Ohio Supreme Court Commission, created to address an overage of cases before the court. Governor Charles Foster appointed McCauley and four other men, who served from April 17, 1883 to April 16, 1885. Following his service on the court, McCauley returned to private practice in Seneca County, partnering with Thomas Weller on June 10, 1885.