Thomas Randall may refer to:

Thomas Randolph was an English poet and dramatist.

Newnham is a village in the Daventry district of the county of Northamptonshire in England. The village is 2 miles (3.2 km) south of Daventry, 3 miles (4.8 km) west from Weedon Bec, 6 miles (9.7 km) west of junction 16 of the M1 motorway and 11 miles (18 km) west of Northampton. The A45 road runs a mile northwest of the village. The nearest railway station is at Long Buckby, 8 miles (13 km) northeast. 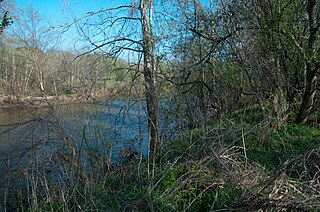 Shadwell is a census-designated place (CDP) in Albemarle County, Virginia, United States, located by the Rivanna River near Charlottesville. The birthplace of Thomas Jefferson, it was named for the Shadwell parish in London by his father, Peter Jefferson, a colonist and planter in central Virginia. Shadwell is the parish where his wife Jane Randolph had been christened. Peter Jefferson and Jane Randolph had six children, among them Thomas, who would become the third president of the United States. Active in county meetings Peter was appointed Justice of the Peace of Albemarle county, taking his oath in September 1744. The following month he was appointed lieutenant colonel to the Albemarle county militia.

The Pushcart Prize is an American literary prize published by Pushcart Press that honors the best "poetry, short fiction, essays or literary whatnot" published in the small presses over the previous year. Magazine and small book press editors are invited to submit up to six works they have featured. Anthologies of the selected works have been published annually since 1976. It is supported and staffed by volunteers.

Thomas or Tom Hudson may refer to:

Thomas Jefferson Randolph of Albemarle County was a planter and politician who served in the Virginia House of Delegates, was rector of the University of Virginia, and was a colonel in the Confederate Army during the American Civil War. He was notable as the oldest grandson of President Thomas Jefferson. He helped manage Monticello near the end of his grandfather's life and was executor of his estate.

Delices is a small village in Dominica. It is located in the south-east of the island, between La Plaine and Petite Savanne.

Thomas or Tom May may refer to:

Thomas or Tom Sexton may refer to:

Thomas Bancroft may refer to: