Thomas Smith & Sons manufactured steam, diesel and electric powered cranes in their Old Foundry on a narrow strip of land between Town Street in Rodley near Leeds and the Leeds and Liverpool Canal.

The history of the firm goes back to 1820 and a firm established by Thomas Smith's father David Smith in partnership with Jeremiah Balmforth and based in the nearby area of Calverley. Like several companies operating around Leeds at the time, their business was supplying the machinery that would be used in the increasingly mechanised mills of the time. From 1840 hand-operated cranes were added to their range of products, and these would start a line of business that would be lucrative for all the partners and their descendants for many years. The company were joined by Jeremiah Booth in 1833; he left in 1847 and established his own 'Union Foundry' on Town Street, Rodley. That company also went on to produce large numbers of cranes and was passed on to Jeremiah Booth's son Joseph Booth. In 1855, the name Joseph Booth & Bros was adopted. [1]

In the 1850s the original partnership was also passed on to the next generation. Jeremiah Balmforth died in 1858 and his son William Balmforth replaced him; the following year David Smith was succeeded by his son Thomas. Around 1860 they started to produce steam-powered cranes capable of handling much larger loads. In 1861 there was a falling-out between Balmforth and Smith; Thomas Smith bought out the company and took over its running. William Balmforth set up a new firm the 'Peel Ings Foundry' and remained in the crane-manufacturing business. As well as steam cranes, they also produced a small number of vertical-boilered locomotives. [2] The Peel Ings Foundry didn't enjoy the same kind of success as the works of Thomas Smith and Joseph Booth, though. It went bankrupt in 1916 and was bought by bridge maker Samuel Butler & Co, but they closed down the works and began production of steam cranes for a time in their own works.

Thomas Smith brought his sons into his firm, and they took over when he died in 1902. The company were incorporated as Thomas Smith & Sons in 1918. [3]

One of the company's most popular products was fairly small steam-powered cranes. Based on a tall central pivot and with the jib counterbalanced by the boiler, these are commonly known as 'Leeds Type' cranes; they were either rail-mounted, where they were required to move around a site, or ground-mounted, for the likes of quays. Joseph Booth also produced very similar cranes, and, with high demand at the time, there were a few firms nearby that, though specialising in other products such as bridges and structural metal work, produced relatively small numbers of steam cranes. John Butler & Co, Samual Butler & Co (mentioned earlier), Isles and Whitaker Brothers are other local firms to have been involved in steam crane production. [4]

The cranes were used in countless docks, railway yards, quarries and construction sites, both at home and overseas. Some of the largest construction projects to use Smith cranes were the Manchester Ship Canal, the Aswan Low Dam, and the Sudan Barrage. [5] As early as 1897 Thomas Smith were producing electrically powered cranes, and in later years the internal combustion engine would replace the steam engine as the power source in their cranes. The cranes were adapted to become excavators, with buckets replacing the usual crane hook; the company also provided magnets for use in sites handling metals. Caterpillar track-fitted versions were offered, and these became more numerous in later years as the railway industry lost its dominance. [6]

The company was taken over by Thomas Ward shortly before World War II. In 1978 they were taken over by Northern Engineering Industries. NEI had taken over many big manufacturing companies, which already included Cowans Sheldon, Clyde Crane, Wellman Cranes and Smith's next-door neighbours Joseph Booth. They all became part of the Crane and Bridge division of Clarke Chapman. This was taken over by Rolls Royce plc in 1989 and by Langley Holdings in 2001.

The Clarke Chapman group still operate in Leeds but under the Wellman Booth name, though they are now situated in smaller premises at Yeadon [7] where the design and administration work is carried out, the engineering work taking place in Gateshead. Though Booth's works was demolished and redeveloped with housing, the former Thomas Smith works survives in other industrial use.

Vulcan Iron Works was the name of several iron foundries in both England and the United States during the Industrial Revolution and, in one case, lasting until the mid-20th century. Vulcan, the Roman god of fire and smithery, was a popular namesake for these foundries.

Kitson and Company was a locomotive manufacturer based in Hunslet, Leeds, West Yorkshire, England.

E. B. Wilson and Company was a locomotive manufacturing company at the Railway Foundry in Hunslet, Leeds, West Yorkshire, England.

The Round Foundry is a former engineering works off Water Lane in Holbeck, Leeds, West Yorkshire, England. Founded in the late 18th century, the building was developed into the Round Foundry Media Centre in 2005.

Rodley is a suburb in the City of Leeds metropolitan borough, West Yorkshire, England. The village is situated within the Bramley and Stanningley ward of Leeds Metropolitan Council, just inside the Leeds Outer Ring Road, 5 miles (8.0 km) north-west from Leeds city centre and 4 miles (6.4 km) north-east from Bradford. The hamlet of Bagley borders Rodley.

The Butterley Company was an English manufacturing firm founded as Benjamin Outram and Company in 1790. Portions of it existed until 2009. 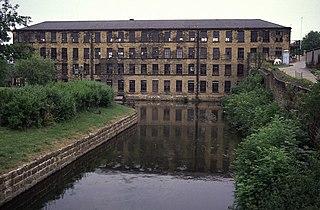 Greenwood & Batley were a large engineering manufacturer with a wide range of products, including armaments, electrical engineering, and printing and milling machinery. They also produced a range of battery-electric railway locomotives under the brand name Greenbat. The works was in Armley, Leeds, UK. 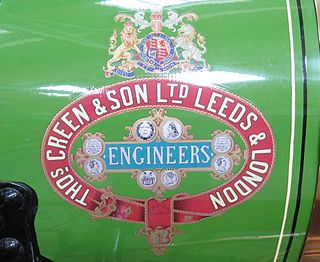 Thomas Green & Son, Ltd. were engineers who manufactured a wide range of products at the Smithfield Foundry, Leeds, United Kingdom

A steam crane is a crane powered by a steam engine. It may be fixed or mobile and, if mobile, it may run on rail tracks, caterpillar tracks, road wheels, or be mounted on a barge. It usually has a vertical boiler placed at the back so that the weight of the boiler counterbalances the weight of the jib and load. 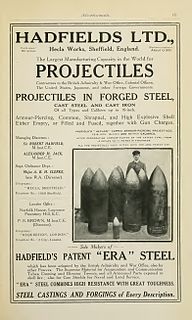 Hadfields Limited of Hecla and East Hecla Sheffield, Yorkshire was a British manufacturer of special steels in particular manganese alloys and the manufacture of steel castings. 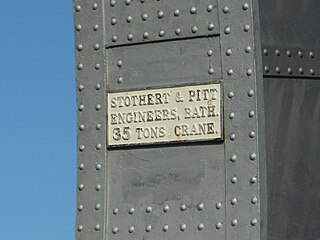 Stothert & Pitt was a British engineering company founded in 1855 in Bath, England. It was the builder of various engineering products ranging from Dock cranes to construction plant and household cast iron items. It went out of business in 1989. The name and intellectual property became part of Clarke Chapman.

Markham & Co. was an ironworks and steelworks company near Chesterfield, Derbyshire, England.

Samuel Ellis and Company was a British engineering company, based in Salford, Manchester. It operated, in various form, from 1832 to 1887.