Thomas Stockdale (died 1653) was a Parliamentarian and MP for Knaresborough.

Thomas Stockdale may also refer to: 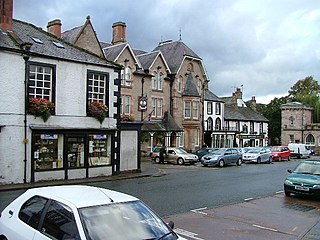 Appleby-in-Westmorland, a market town and civil parish in the Eden district of Cumbria, England, had a population of 3,048 at the 2011 Census. Crossed by the River Eden, Appleby was the county town of the historic county of Westmorland and the smallest such town in England. It was known simply as Appleby until 1974, when the council of the successor parish to the borough changed it to retain the name Westmorland, which had disappeared as an administrative area under the Local Government Act 1972. It lies 14 miles south-east of Penrith, 32 miles south-east of Carlisle, 27 miles north-east of Kendal and 45 miles west of Darlington.

Wolfmother is an Australian hard rock band from Sydney, New South Wales. Formed in 2004, the group is centred around vocalist and guitarist Andrew Stockdale, who is the only constant member of the lineup. The band has been through many personnel changes since their formation, with the current incarnation including drummer Hamish Rosser and bassist Brad Heald, both of whom are former members of The Vines. The original – and most commercially successful – lineup included bassist and keyboardist Chris Ross and drummer Myles Heskett. Ross and Heskett left Wolfmother after four years in 2008.

Stockdale may refer to:

Appleby was a parliamentary constituency in the county of Westmorland in England. It existed for two separate periods: from 1295 to 1832, and from 1885 to 1918.

William Lowther may refer to:

Bowes is a surname shared by several notable people. In Ireland, it is mostly an anglicised form of Ó Buadhaigh

William Bowyer may refer to:

Thomas Warcop may refer to:

Thomas Appleby may refer to:

Overdo is a surname. Notable people with the surname include:

Thomas Musgrave may refer to:

Philip Musgrave may refer to:

Thomas Chamberlain may refer to:

Robert Overdo may refer to:

William Crackenthorpe may refer to:

Robert Sandford may refer to:

Robert or Bob Appleby may refer to: