Thomas Veres (born c. 1926 in Budapest) was the photographer for Raoul Wallenberg who documented the Holocaust in Budapest during World War II.

His photographs were used in the film The Last Days (1998), directed by James Moll. 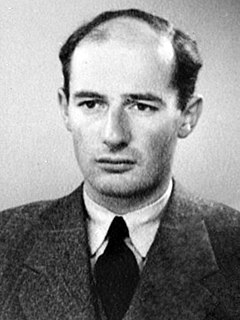 Raoul Gustaf Wallenberg was a Swedish architect, businessman, diplomat, and humanitarian. He saved thousands of Jews in German-occupied Hungary during the Holocaust from German Nazis and Hungarian Fascists during the later stages of World War II. While serving as Sweden's special envoy in Budapest between July and December 1944, Wallenberg issued protective passports and sheltered Jews in buildings designated as Swedish territory. 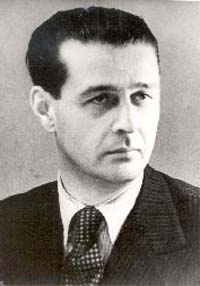 Giorgio Perlasca was an Italian businessman and former fascist who, with the collaboration of official diplomats, posed as the Spanish consul-general to Hungary in the winter of 1944, and saved 5,218 Jews from deportation to Nazi extermination camps in eastern Europe. In 1989 Perlasca was designated by Israel as a Righteous Among the Nations.

The Budapest Ghetto was a Nazi ghetto set up in Budapest, Hungary, where Jews were forced to relocate by a decree of the Government of National Unity led by the fascist Arrow cross party during the final stages of World War II. The ghetto existed only from November 29, 1944 - January 17, 1945. 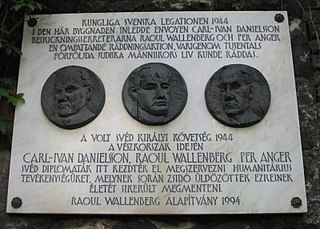 Per Johan Valentin Anger was a Swedish diplomat. Anger was Raoul Wallenberg's co-worker at the Swedish legation in Budapest during World War II when many Jews were saved because they were supplied with Swedish passports. After the war, he spent a lot of time trying to clarify Wallenberg's fate. 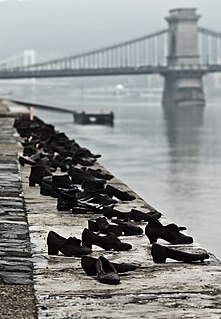 The Shoes on the Danube Bank is a memorial erected on April 16 2005, in Budapest, Hungary. Conceived by film director Can Togay, he created it on the east bank of the Danube River with sculptor Gyula Pauer to honour the Jews who were massacred by Fascist Hungarian militia belonging to the Arrow Cross Party in Budapest during the Second World War. They were ordered to take off their shoes, and were shot at the edge of the water so that their bodies fell into the river and were carried away. It represents their shoes left behind on the bank.

Lars Ernster was a professor of biochemistry, and a member of the Board of the Nobel Foundation.

Pál Szalai also spelled Pál Szalay and later anglicized as Paul Sterling was a high-ranking Hungarian police officer and reinstated member of the Arrow Cross Party after 1944. In 1945, together with Swedish diplomat Raoul Wallenberg, Szalai helped save hundreds of Hungarian Jews in the Budapest ghetto.

Harald Feller was a Swiss diplomat who saved Hungarian Jews during the Holocaust, for which he was honored by Yad Vashem as one of the Righteous Among the Nations in 1999.

The Wallenberg Medal of the University of Michigan is awarded to outstanding humanitarians whose actions on behalf of the defenseless and oppressed reflect the heroic commitment and sacrifice of Raoul Wallenberg, the Swedish diplomat who rescued tens of thousands of Jews in Budapest during the closing months of World War II. 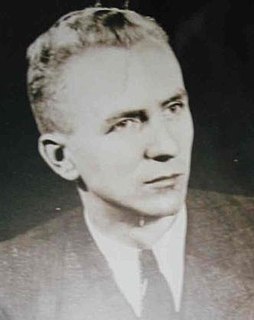 Károly Szabó was an employee of the Swedish Embassy in Budapest from 1944 to 1945 when he rescued Hungarian Jews during the Holocaust. He was a supporter of Raoul Wallenberg and had a significant role in making contact with the representatives of the Hungarian police and other state officials. He was arrested without legal proceedings in 1953 in Budapest, in a secret trial.

Valdemar Langlet was a Swedish publisher, and an early Esperantist. With his wife Nina Borovko-Langlet in Budapest, he is credited with saving many Jews from the Holocaust, by providing Swedish documents saying that people were waiting for Swedish nationality. Raoul Wallenberg was inspired by Langlet and used the same method to save Jewish people when he came to Budapest. In 1965, Valdemar and Nina Langlet were recognized as Righteous Among the Nations by Yad Vashem.

Hungary–Sweden relations are foreign relations between Hungary and Sweden. Sweden has an embassy in Budapest. Diplomacy relations between the two countries started on 28 December 1945. These relations developed to a higher ambassador level. In Stockholm there is a Hungarian embassy. Both countries are members of the European Union and Council of Europe.

Baron Gábor Kemény was a Hungarian politician, who served as Minister of Foreign Affairs in the Government of National Unity led by Szálasi between 1944 and 1945. He prevented the diplomatic protests against the terror. After the fall of Budapest he tried to escape into Western Europe, but the arriving American troops captured him with other members of the Arrow Cross Party's government. He was tried by the People's Tribunal in Budapest in open sessions and sentenced to death for war crimes and high treason. Kemény was hanged in 1946 in Budapest. He was the youngest member of that Government.

The International Raoul Wallenberg Foundation (IRWF) is a non-governmental organization which researches Holocaust rescuers and advocates for their recognition. The organization developed educational programs for school to promote peace and civil service. Founded by Baruch Tenembaum, it has offices in Buenos Aires, New York, Berlin, Rio de Janeiro and Jerusalem.

Imre Varga was a Hungarian sculptor, painter, designer and graphic artist. He was regarded as one of Hungary's most important living artists, and he has been called one of the "most skilled sculptors in Hungary."

Paul A. Levine was an American–Swedish Holocaust and genocide historian, co-author of a widely used Swedish textbook on the subject.