Thomas Wedge may refer to: 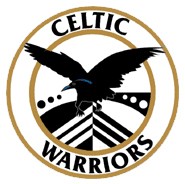 Blackheath Football Club is a rugby union club based in Well Hall, Eltham in south-east London.

Rugby union at the 1908 Summer Olympics. The event was summarised under the "Football" heading along with association football. The host Great Britain was represented by Cornwall, the 1908 county champion. Defending Olympic champions France withdrew, leaving Australasia, as the only other remaining entrant.

A flying wedge is a configuration created from a body moving forward in a triangular formation. This V-shaped arrangement began as a successful military strategy in ancient times when infantry units would move forward in wedge formations to smash through an enemy's lines. This principle was later used by Medieval European armies, as well as modern armed forces, which have adapted the V-shaped wedge for armored assault. 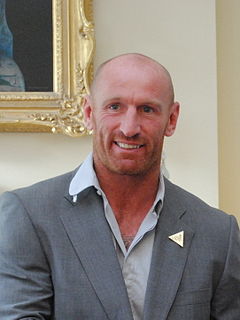 Gareth Thomas, nicknamed "Alfie", is a Welsh former professional rugby footballer, who represented Wales in both rugby union and rugby league. With 100 test match appearances he was the most capped Welsh rugby union player until he was overtaken by Stephen Jones in September 2011. He is currently ranked 13th among international try scorers, and is the second highest Wales try scorer behind Shane Williams. He also won 4 rugby league caps for Wales, scoring 3 tries.

Craig Neil Evans is a Zimbabwean cricketer. He is also famous in Zimbabwe golf circles for thinning lob wedges to 6 inches out of deep rough to make par.

Guy's, Kings and St. Thomas' Rugby Football Club ("GKT") is the name given to the modern amalgam of three formerly distinct hospital rugby clubs each with a long history, having all been founded in the nineteenth century. The teams from Guy's Hospital and St Thomas' Hospital were the first to merge following the union of their respective Medical Departments. When King's College Hospital also merged in 1999 the King's College Hospital Rugby Football Club opted to remain separate and in so doing became an open rugby club that no longer represented the Hospital Medic's. GKT is notable for having been part of the twenty-one founding members of the Rugby Football Union, and across its joint history has produced many international players.

The Austrian Rugby Federation is the governing body for rugby union in Austria.

Thomas Grenfell Wedge was a British rugby union player who competed in the 1908 Summer Olympics. He was a member of the British rugby union team, which won the silver medal. Wedge a scrum-half who played his club rugby for St Ives RFC as well as representing Cornwall.

David "Tarw" Jones was a Welsh dual-code international rugby union and rugby league footballer. He was a member of the winning Welsh team who beat the 1905 touring All Blacks in a game considered one of the greatest in the history of rugby union. Jones is the only Welsh player to have been part of a team to have beaten the All Blacks in the union and league game and is the second dual-code international rugby player from the Northern Hemisphere.

The Cambridge University Rugby Union Football Club, sometimes abbreviated "CURUFC", is the rugby union club of the University of Cambridge. The team plays Oxford University RFC in the annual Varsity Match at Twickenham Stadium every December.

Thomas Joubert du Toit is a South African rugby union player for the South Africa national team and the Sharks in Super Rugby. His regular position is prop.

Wedge is the surname of:

St Ives Rugby Football Club is a Cornish rugby union club that are based in the town of St Ives and play home games at the Recreation Ground, just off Alexandra Road. The club operate a senior men's side as well as several min and junior teams. The men's first team currently play in Tribute South West 1 West following their promotion from Tribute Western Counties West at the end of the 2017-18 season. The club play a traditional Boxing Day fixture against neighbours Hayle RFC.

The Auld Alliance Trophy is a trophy in rugby union awarded to the winner of the annual Six Nations Championship match between France and Scotland.