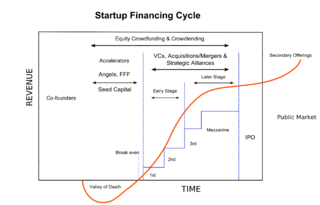 Venture capital (VC) is a type of financing that is provided by firms or funds to small, early-stage, emerging firms that are deemed to have high growth potential, or which have demonstrated high growth. Venture capital firms or funds invest in these early-stage companies in exchange for equity, or an ownership stake, in those companies. Venture capitalists take on the risk of financing risky start-ups in the hopes that some of the firms they support will become successful. Because startups face high uncertainty, VC investments have high rates of failure. The start-ups are usually based on an innovative technology or business model and they are usually from the high technology industries, such as information technology (IT), clean technology or biotechnology.

U.S. Postal Service Pro Cycling Team was a United States-based professional road bicycle racing team. On June 15, 2004, the Discovery Channel signed a deal to become sponsor of the team for the 2004–2007 seasons and its name changed to Discovery Channel Pro Cycling Team From 2005 until 2007, the team was one of the 20 teams that competed in the new UCI ProTour. As part of the sponsorship deal, Lance Armstrong, the team's undisputed leader, provided on-air appearances for the Discovery Networks TV channels. The deal did not affect the rights of secondary sponsor OLN, now known as NBC Sports Network in the US, to air major cycling events such as the Tour de France, although the two channels are competitors.

Providence Equity Partners LLC is an American global private equity investment firm focused on media, communications, education and information investments. The firm specializes in leveraged buyout transactions as well as growth capital investments and has invested in more than 140 companies globally since its inception in 1989.

Bain Capital is an American private investment firm based in Boston, Massachusetts. It specializes in private equity, venture capital, credit, public equity, impact investing, life sciences and real estate. Bain Capital invests across a range of industry sectors and geographic regions. As of 2018, the firm managed more than $105 billion of investor capital.

A private equity fund is a collective investment scheme used for making investments in various equity securities according to one of the investment strategies associated with private equity. Private equity funds are typically limited partnerships with a fixed term of 10 years. At inception, institutional investors make an unfunded commitment to the limited partnership, which is then drawn over the term of the fund. From the investors' point of view, funds can be traditional or asymmetric.

TWP or Twp may refer to: 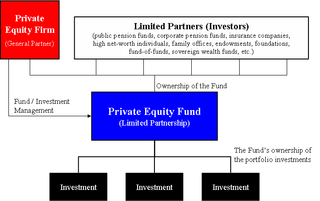 Robertson Stephens was a San Francisco-based boutique investment bank that focused primarily on technology companies. The firm was closed by its parent company, FleetBoston in July 2002 as a result of the collapse of the technology sector and the end of the dot-com bubble.

Highland Capital Partners is a global venture capital firm with offices in Silicon Valley, Boston and Shanghai. Highland has raised over $3 billion in committed capital and invested in more than 225 companies. Investments include 2U, Ask Jeeves, Bromium, Gigamon, Handy, Lululemon Athletica, Lycos, Malwarebytes, MapQuest, Qihoo 360, Quattro Wireless, Rent the Runway, Shift, Starent Networks, Sybase, VistaPrint, Turbonomic, and WePay. Highland also serves as a mentor for future entrepreneurs through Summer@Highland, a program that provides students and university-affiliated startups with the environment and resources to take their initiative to the next level. They also help run a program for early stage security companies to explore their ideas and obtain customers called Cybersecurity Factory.

Lee Equity Partners is a private equity firm focused on growth capital investments in middle-market companies across a range of industries.

Weston Presidio is an American private equity firm focused on growth capital investments in late-stage companies across a range of industries with a specific focus on the consumer products, business services, industrial, media, publishing, healthcare and technology sectors. 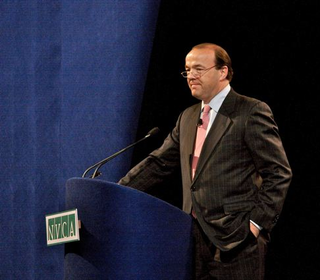 Robert E. Grady is a Wyoming-based businessman, venture capitalist and private equity investor, and a former senior-level public official. Most recently, he has been a partner at Gryphon Investors, a middle-market private equity firm, and a director of multiple public and private companies. He has been active in Wyoming over many years as an economic advisor to former Governor Matt Mead; a board member of the Jackson Hole Mountain Resort; the Chairman of the St. John’s Hospital Foundation; a member of Wyoming’s State Banking Board; a board member at the Jackson Hole Land Trust, the Wyoming Business Alliance, and the Jackson Hole One Fly Foundation; the former Finance Chairman of the Wyoming Republican Party; the co-founder of the Jackson Hole Technology Partnership and Global Technology Summit; a frequent speaker and adviser to up-and-coming small businesses; and a volunteer coach for Jackson Youth Hockey.

Michael Greenberg is an American lawyer, regarded as a legal expert in intellectual property law and patent law. He is a partner of the Washington, D.C.-based law firm, Greenberg & Lieberman, with Stevan Lieberman, established in 1996. As part of the firm, Greenberg has been involved in hundreds of UDRP or trademark infringement disputes and is a well-regarded and experienced litigator, with particular expertise in patent infringement cases.