Thomas Winterbottom may refer to:

Lord mayor is a title of a mayor of what is usually a major city in the United Kingdom or Commonwealth realm, with special recognition bestowed by the sovereign. However, the title or an equivalent is present in other countries, including forms such as "high mayor". Aldermen usually elect the lord mayor from their ranks, who consequently becomes a member of the council/alderman. 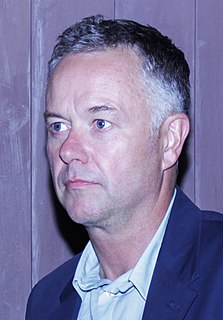 Michael Winterbottom is an English filmmaker. He began his career working in British television before moving into features. Three of his films—Welcome to Sarajevo, Wonderland and 24 Hour Party People—have competed for the Palme d'Or at the Cannes Film Festival.

Two sheriffs are elected annually for the City of London by the Liverymen of the City Livery Companies. Today's sheriffs have only nominal duties, but the historical officeholders had important judicial responsibilities. They have attended the Justices at the Central Criminal Court, Old Bailey, since its original role as the Court for the City and Middlesex. 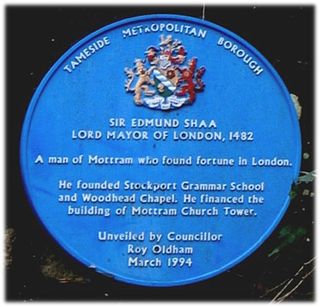 Sir Edmund Shaa or Shaw was a London goldsmith, Sheriff of London in 1475 and Lord Mayor of London in 1482. Shaa lent money to Edward IV and, as mayor, was extensively involved in the coronation of Edward IV's brother Richard III. He was later knighted and made a member of the Privy Council.

The flag of the City of London is based on the flag of England, having a centred red St George's Cross on a white background, with the red sword in the upper hoist canton. The sword is believed to represent the sword that beheaded Saint Paul who is the patron saint of the city. The tip of the sword always points upwards; therefore, when the flag is held on its side as a banner, the sword would be printed to face hoist and would be located on the left as it is hanging down.

Warned Off is a 1930 British silent film directed by Walter West and starring Tony Wylde, Chili Bouchier and Queenie Thomas. It was made at Cricklewood Studios.

The Emperor's New Clothes is a 2015 documentary film about the growing disparity between economic classes, directed by Michael Winterbottom and starring actor/activist Russell Brand.

Sir Gerard Conyers was an English banker and Lord Mayor of London.