Thomas Lawson Winwood (7 February 1910 – 23 September 1996) was an English first-class cricketer. He was a right-handed batsman and very occasional right arm medium-pace bowler who played 18 times for Worcestershire in the early 1930s. He made 36 on debut against Derbyshire in August 1930, but his most notable innings came in his second first-class innings three weeks later, when he hit 104 in two hours [1] against Hampshire. He never again made more than 30 in an innings.

Worcestershire County Cricket Club is one of eighteen first-class county clubs within the domestic cricket structure of England and Wales. It represents the historic county of Worcestershire. Its Vitality Blast T20 team - who are the defending champions after claiming their first title in 2018 - has been rebranded the Worcestershire Rapids, but the county is known by most fans as "the Pears". The club is based at New Road, Worcester. Founded in 1865, Worcestershire held minor status at first and was a prominent member of the early Minor Counties Championship in the 1890s, winning the competition three times. In 1899, the club joined the County Championship and the team was elevated to first-class status. Since then, Worcestershire have played in every top-level domestic cricket competition in England.

All but two of Winwood's matches were in 1930 and 1931; he did not play in the next two seasons and made one appearance (against Nottinghamshire in June 1934.

Winwood was born in Dudley (then Worcestershire); he died in Bromyard, Herefordshire at the age of 86. 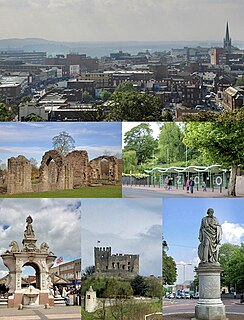 Dudley is a town in the county of West Midlands, England, 6 miles (9.7 km) south-east of Wolverhampton and 10.5 miles (16.9 km) north-west of Birmingham. The town is the administrative centre of the Metropolitan Borough of Dudley and in 2011 had a population of 79,379. The Metropolitan Borough, which includes the towns of Stourbridge and Halesowen, had a population of 312,900. Dudley is sometimes called the capital of the Black Country.

Bromyard is a market town in Herefordshire, England, situated in the valley of the River Frome. The latest census gives a population in 2011 of approximately 4,500. It lies near to the county border with Worcestershire on the A44 between Leominster and Worcester. Bromyard has a number of traditional half-timbered buildings, including some of the pubs, and the parish church dates back to Norman times. For centuries there was a thriving and livestock and cattle market. The town is twinned with Athis-de-l'Orne, Normandy. 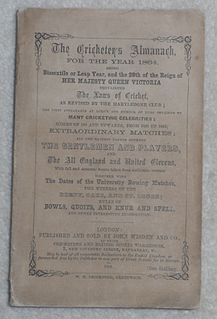 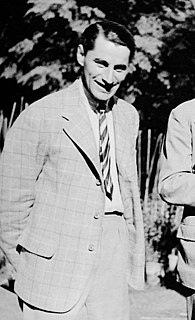 Cyril Frederick Walters was a Welsh first-class cricketer who had most of his success after leaving Glamorgan to do duty as captain-secretary of Worcestershire. In this role he developed his batting to such an extent that for a brief period he became an England regular and even captained them in one match as a deputy for Bob Wyatt. However, he unexpectedly completely gave up cricket soon after that, to the dismay of his country and county.

Tom Goddard was an English cricketer and the fifth-highest wicket taker in first-class cricket.

John David Benbow "Jack" Robertson was an English cricketer, who played county cricket for Middlesex, and in eleven Tests for England.

Arthur Whitmore Isaac was an English first-class cricketer: a right-handed batsman who played a number of times, though with only modest success, for Worcestershire in their early seasons in first-class cricket. He was also a member of the Club Committee, and spent a period as its Treasurer.

Gerald Harvey Humphries was an English first-class cricketer who played two matches for Worcestershire in the 1930s. He made 26 and 4 in the first game against Sussex, while in the second two years later he hit 36 in his only innings.

Charles Anderson Fiddian Fiddian-Green was an English cricketer: an opening batsman who played 107 first-class matches between the wars, playing county cricket for both Warwickshire and Worcestershire, as well as university cricket for Cambridge University.

Humphrey Adam Gilbert was an Indian-born English first-class cricketer who played in 118 matches. All of these were in England, with the majority for Worcestershire and Oxford University. Very much a specialist bowler, his Wisden obituary commented that "His qualities as a batsman [could] be gauged from the fact that in his five innings against Cambridge he scored one run." He was nicknamed Barmy Gilbert.

Roger Henry Charles Human was an English first-class cricketer who played 59 matches in the 1930s. He mainly played for Cambridge University and then Worcestershire, but also appeared once each for the Gentlemen and Marylebone Cricket Club (MCC). Human also played minor counties cricket for Berkshire and (once) Oxfordshire. He gained Blues at both cricket and football.

William Victor Fox was an English sportsman who played both cricket and football to a high level.

Edward Stanley Baker was an English first-class cricketer: a wicket-keeper who played 32 first-class matches for Worcestershire in the 1930s.

Roger Charles MacDonald Kimpton, DFC was an Australian first-class cricketer who played 62 first-class games, mostly in the late 1930s. The majority of his appearances were for Oxford University and Worcestershire, although he appeared for the Gentlemen in both 1936 and 1937 and for an England XI in 1937. Unusually, he alternated somewhat between keeping wicket and bowling, although his success with the ball was limited.

Alfred John William Croom was an English cricketer. He was a right-hand opening batsman and right-arm off-spin bowler who played for Warwickshire.

David Frank Walker was an English cricketer. He was a right-hand batsman and slow left-arm bowler who played first-class cricket for Oxford University and minor counties cricket for Norfolk.

Arthur Frank Irish, born at Dudley, then in Worcestershire, on 23 November 1918 and died at Sidmouth, Devon on 17 July 1997, played first-class cricket for Somerset for one season, and Minor Counties cricket for Devon for many years.

Searson Harry Wigginton was an English cricketer who played first-class cricket for Leicestershire from 1930 to 1934. He was born in Leicester and died in Bulawayo, Zimbabwe.

Edward Brown was an English cricketer who played first-class cricket in 28 matches for Warwickshire between 1932 and 1934. He was born in Newcastle upon Tyne and died at Castle Bromwich, Birmingham. 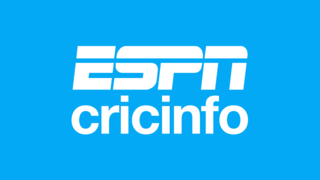