Antonio Thomaz Santos de Barros (born 2 May 1986), commonly known as Thomaz, is a Bolivian nationalized Brazilian professional footballer who plays as an attacking midfielder. He is currently a free agent.

Thomaz played for Juventus and Grêmio Barueri in his native Brazil before signing for Swiss club Chiasso in 2007. After spending the 2007–08 season in Switzerland, during which he scored four goals, Thomaz returned to Brazil to play for Avaí.

He moved to the United States in 2010 when he signed for Ventura County Fusion in the USL Premier Development League. Thomaz made his debut for Ventura on July 16, 2010 in a match against the Lancaster Rattlers. [1]

Return to Caxias After the term of the loan, Thomaz returned to the Caxias for the dispute of the Gauchão.

Marcílio Dias Without being taken advantage of at the beginning of the 2012 season, he left the Caxias and was hired by Marcílio Dias the Catarinense Championship sequence.

Inter de Lages Thomaz was hired by Inter de Lages for the Dispute of the Access Division of the Catarinense Championship. The athlete helped the club to conquer the title of the competition.

After the conquest, Thomaz went to defend Brasiliense.

Jorge Wilstermann in 2014 took the team "aviator" where he was wearing the shirt number 10 and becoming champion of the tournament with the team in the 2016 tournament of the Bolivian League.

On March 29, 2017, on the request of Rogério Ceni, São Paulo paid $130,000 to Jorge Wilstermann to hire Thomaz, who signed a contract with São Paulo for three seasons, receiving a salary of 50 thousand reais a month. On April 8, 2017, on the quarterfinals of Campeonato Paulista, he scored his first goal for his new club, in the win against Linense by 5x0.

The Clube Atlético Juventus, usually known simply as Juventus, is a professional Brazilian football club based in Mooca, a São Paulo neighborhood. Although it was a Campeonato Brasileiro Série B winner once, Juventus nowadays competes only in São Paulo tournaments, like Campeonato Paulista.

Marcelo dos Santos, known as Marcelinho Paraíba or simply Marcelinho, is a former Brazilian footballer who last played for AD Perilima as an attacking midfielder.

Alfredo Mostarda Filho, simply known as Alfredo is a former Brazilian footballer who played as a defender. 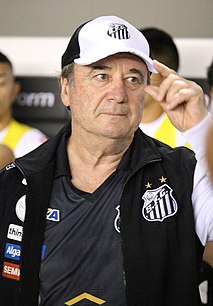 Levir Culpi is a Brazilian retired footballer who played as a central defender, and is a manager.

Anderson Luiz Gomes Ribeiro, known as Anderson Luiz, is a Brazilian footballer who plays for Boavista as a central defender.

Edivaldo Rojas Hermoza, commonly known as Bolívia, is a Bolivian footballer who plays for Club San José as a forward.

Clube Náutico Marcílio Dias, usually known simply as Marcílio Dias, is a Brazilian football club from Itajaí, Santa Catarina state. The club plays its home matches at Hercílio Luz and competed in Copa João Havelange in 2000, in the Campeonato Brasileiro Série B in 1989, in the Campeonato Brasileiro Série C in 1988, 1995, 2001, 2003, 2005 and 2006. The club won the Recopa Sul-Brasileira in 2007, the state championship in 1963, and the state cup in 2007.

Ricardo Pinto is a retired professional association footballer who played as a goalkeeper for several Campeonato Brasileiro Série A clubs and for Primera División Paraguaya club Cerro Porteño. He is the current coach of Paraná Clube.

José Cristiano de Souza Jr. or known as Júnior is a Brazilian footballer.

Jorge Henrique Amaral de Castro known as Jorginho Paulista or just Jorginho is a Brazilian footballer who plays as a left-sided defender or midfielder for Flamengo-PI.

Ytalo José Oliveira dos Santos, simply known as Ytalo, is a Brazilian professional footballer who currently plays for Bragantino in, as a forward.

Leonardo Medeiros da Silva, known as Léo Kanu, is a Brazilian professional footballer who plays for Internacional de Lages, as a central defender.

The following article presents a summary of the 2013 football (soccer) season in Brazil, which is the 112th season of competitive football in the country.

Gilberto dos Santos Souza Júnior known as Gilberto, is a Brazilian footballer who currently plays for Anapolina. He plays mainly as a defensive midfielder who sometimes plays as a central midfielder.

Allan Monteiro Dias, known as Allan Dias, is a Brazilian professional footballer who plays for URT as an attacking midfielder.

The following article presents a summary of the 2018 football season in Brazil, which was the 117th season of competitive football in the country.

Antônio Nunes, better known as Lico is a Brazilian former professional football player and manager who played as a midfielder and striker. He was a club icon for Brazilian football clubs Joinville and Flamengo, winning the 1981 Copa Libertadores and Intercontinental Cup with the latter.