Thompson Lake or Lake Thompson may refer to: 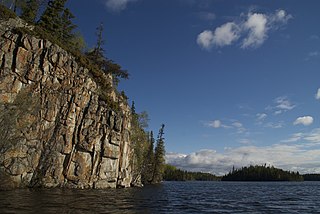 Thompson Lake is a glacial lake approximately 12 kilometres (7.5 mi) northeast of Bakers Narrows which drains into Murray Lake. It is part of the Nelson River watershed, in the Hudson Bay drainage basin in the Northern Region of Manitoba, Canada. The lakes sits in Churchill River Upland portion of the Midwestern Canadian Shield forests and is surrounded by mixed forest with stands of black spruce, white spruce, jack pine, and trembling aspen. The shoreline is characterized by steeply sloping irregular rock ridges and poorly drained areas of muskeg. The lake contains northern pike, walleye, and yellow perch.

in the United States

Thompson Lake is a lake in Meeker County, in the U.S. state of Minnesota.

Thompson Lake is a lake in St. Louis County, in the U.S. state of Minnesota.

Thomsons Lake is a lake nature reserve in the City of Cockburn, Western Australia, approximately 25 kilometres (16 mi) south of the central business district of Perth, the state capital, and on the southern fringes of the Perth metropolitan area. It in the suburb of Beeliar, 7 kilometres (4.3 mi) south-west of Jandakot Airport. It is a still largely natural wetland, with adjoining native vegetation, surrounded by land developed for housing and agriculture, that regularly supports large numbers of shorebirds and other waterbirds.

Thompson Pond in Pine Plains, New York is a 75-acre (30 ha) 15,000-year-old glacial kettle pond at the foot of 1,403-foot (428 m) Stissing Mountain. It is the source of Wappinger Creek, a tributary of the Hudson River that drains much of Dutchess County.

Gallatin County is a county in the U.S. state of Montana. With its county seat in Bozeman, it is the third-most populous county in Montana, with a population of 89,513 in 2010.

Lake George or George Lake may refer to:

Crystal Lake or Lake Crystal may refer to:

Long Lake may refer to: 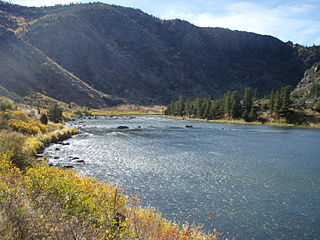 The Madison River is a headwater tributary of the Missouri River, approximately 183 miles (295 km) long, in Wyoming and Montana. Its confluence with the Jefferson and Gallatin rivers near Three Forks, Montana forms the Missouri River.

The East Gallatin River flows 42 miles (68 km) in a northwesterly direction through the Gallatin valley, Gallatin County, Montana. Rising from the confluence of Rocky Creek and several other small streams, the East Gallatin begins about one mile (1.6 km) east of downtown Bozeman, Montana. The river joins the main stem of the Gallatin River 2.3 miles (3.7 km) north of Manhattan, Montana. Throughout its course, the river traverses mostly valley floor ranch and farm land with typical summer flows of approximately 50 cu ft/s (1.4 m3/s).

Green Lake may refer to:

Horseshoe Lake may refer to: 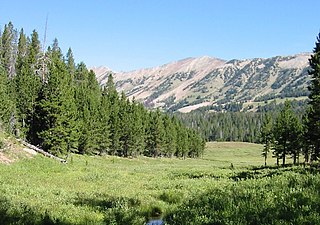 Founded in 1899, Gallatin National Forest is located in south central Montana, United States. The forest comprises 1,819,515 acres (7,363.32 km2) and has portions of both the Absaroka-Beartooth and Lee Metcalf Wilderness areas within its boundaries. Gallatin National Forest borders Yellowstone National Park on the north and northwest and is part of the Greater Yellowstone Ecosystem, a region which encompasses almost 20,000,000 acres (81,000 km2). The forest is named after Albert Gallatin (1761–1849), U.S. Secretary of the Treasury and scholar of Native American languages and cultures. 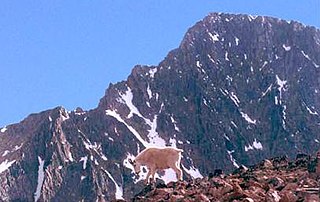 Custer National Forest is located primarily in the south central part of the U.S. state of Montana but also has separate sections in northwestern South Dakota. With a total area of 1,188,130 acres (4,808 km2), the forest comprises over 10 separate sections. While in the westernmost sections, Custer National Forest is a part of the Greater Yellowstone Ecosystem, the easternmost sections are a combination of forest "islands" and grasslands. A portion of the forest is also part of the Absaroka-Beartooth Wilderness and constitutes over a third of the wilderness land. South of Red Lodge, Montana, the Beartooth Highway passes through the forest en route to Yellowstone National Park.

Loon Lake may refer to:

Mystic Lake can refer to:

Dead Lake may refer to:

The Methodist Episcopal Church was the first Methodist denomination founded in the United States.

Fairy Lake is a lake in Gallatin County, Montana at the base of the Sacagawea Peak, a part of the Bridger mountains in south central Montana. It is located within the northwestern section of the Gallatin National Forest and sits at an elevation of 7,557 ft (2,303 m).