Thonet is a surname. Notable people with the surname include: 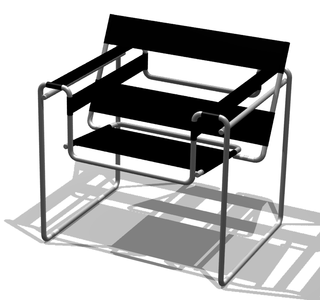 The Wassily Chair, also known as the Model B3 chair, was designed by Marcel Breuer in 1925-1926 while he was the head of the cabinet-making workshop at the Bauhaus, in Dessau, Germany.

Ready-to-assemble furniture (RTA), also known as knock-down furniture (KD), flat pack furniture, or kit furniture, is a form of furniture that requires customer assembly. The separate components are packed for sale in cartons which also contain assembly instructions and sometimes hardware. The furniture is generally simple to assemble with basic tools such as screwdrivers, which are also sometimes included. Ready-to-assemble furniture is popular with consumers who wish to save money by assembling the product themselves.

A rocking chair or rocker is a type of chair with two curved bands attached to the bottom of the legs, connecting the legs on each side to each other. The rockers contact the floor at only two points, giving the occupant the ability to rock back and forth by shifting their weight or pushing lightly with their feet. Rocking chairs are most commonly made of wood. Some rocking chairs can fold.

Royal warrants of appointment have been issued for centuries to tradespeople who supply goods or services to a royal court or certain royal personages. The royal warrant enables the supplier to advertise the fact that they supply to the issuer of the royal warrant; thus lending prestige to the supplier. Royal families of the United Kingdom, the Netherlands, Belgium, Luxembourg, Monaco, Denmark, Sweden, and Japan among others, allow tradesmen to advertise royal patronage.

Ryohin Keikaku Co., Ltd., or Muji is a Japanese retail company which sells a wide variety of household and consumer goods. Muji's design philosophy is minimalist, and it places an emphasis on recycling, reducing production and packaging waste, and a no-logo or "no-brand" policy. The name Muji is derived from the first part of Mujirushi Ryōhin, translated as No-Brand Quality Goods on Muji's European website.

Gebrüder Thonet or the Thonet Brothers was a European furniture manufacturer. It continues as a German company, Austrian and Czech (TON).

The No. 14 chair is the most famous chair made by the Thonet chair company. Also known as the bistro chair, it was designed by Michael Thonet and introduced in 1859, becoming the world's first mass-produced item of furniture. It is made using a unique steam-bending technology, known as bentwood, that required years to perfect. With its affordable price and simple design, it became one of the best-selling chairs ever made. Some 50 million No. 14s were sold between 1859 and 1930, and millions more have been sold since.

Bentwood objects are those made by wetting wood, then bending it and letting it harden into curved shapes and patterns.

The Volkstheater in Vienna was founded in 1889 by request of the citizens of Vienna, amongst them the dramatist Ludwig Anzengruber and the furniture manufacturer Thonet, in order to offer a popular counter weight to the Hofburgtheater. It was erected according to designs by Ferdinand Fellner and Hermann Helmer, who attempted to reconcile their plans with historicism. It is located in Neubau, the seventh district of Vienna.

Frankenberg an der Eder is a town in Waldeck-Frankenberg district, Hesse, Germany.

The Vitra Design Museum is a privately owned museum for design in Weil am Rhein, Germany.

Michael Thonet was a German-Austrian cabinet maker, known for the invention of bentwood furniture.

Veľké Uherce is a village and municipality in Partizánske District in the Trenčín Region of western Slovakia.

Steam bending is a woodworking technique where wood is exposed to steam to make it pliable. Heat and moisture from steam can soften wood fibres enough so they can be bent and stretched, and when cooled down they will hold their new shape.

Café Sperl is a traditional Viennese café located at Gumpendorfer Straße 11 in the Mariahilf sixth district of Vienna, Austria. The café is on the Austrian Register of Historic Places.