Thoovalkattu is a 2010 Malayalam film directed by Venu B Nair starring Manoj K. Jayan and Lakshmi Gopalaswami in the lead roles.

Manoj K. Jayan plays the character of Sundaran, who is the lead character in this movie. On contrary to his name, he is quite an unattractive person. Still he has managed to win the heart of Devu (Lakshmi Gopalaswami). Hajiyar (Sai Kumar) is another character in the movie is less of an employee and more of an elder brother to Sundaran. Hajiyar's daughter happens to confront a few terrorists who blows up a mansion in the village.

Harikrishan Giri Goswami, better known by his screen name Manoj Kumar, is an Indian actor, filmmaker, screenwriter, lyricist and editor who worked in Hindi cinema. He is known for acting and making films with patriotic themes, and has been given the nickname Bharat Kumar. He is the recipient of a National Film Award and seven Filmfare Awards, in varied categories. 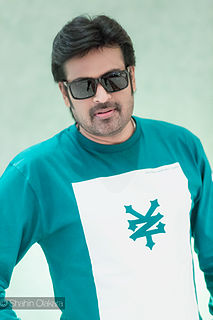 Manoj Kadampoothramadam Jayan is an Indian actor who predominantly acts in Malayalam and Tamil films in addition to a few Telugu and Kannada films, and he has also acted in a Bollywood film. Manoj has won three Kerala State Film Award for Second Best Actor, respectively for his portrayals of Hariharan's "Kuttan Thampuran" in Sargam (1992), "Thalakkal Chandu" in Pazhassi Raja (2009) and "Kunjiraman" in Farook Abdul Rahiman's Kaliyachan. His most critically acclaimed characters are "Kuttan Thampuran" (Sargam),"Thirumangalath Neelakandan Namboothiri" (Perumthachan),"Kunjunni Namboothiri" (Parinayam), "Unnikrishnan" (Venkalam),"Ananthakrishna Warrier" (Sopanam), "Digambaran" (Anandabhadram) and "Thalakkal Chandu" and many more. He is known for his polished acting skills and style quotient. 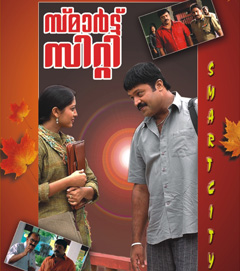 Smart City is a 2006 Indian Malayalam-language action film written and directed by B. Unnikrishnan. The film stars Suresh Gopi, Murali, Jayasurya, Gopika, Lakshmi Gopalaswami, Sanjay Mitra, Manoj K. Jayan and Siddique. This is the debut movie of Unnikrishnan as a director.

Chattambinaadu is a Malayalam-language action comedy film released in 2009. The film was directed by Shafi and written by Benny P. Nayarambalam. The film was made under Mammootty's production company Play House which distributed it as well. The film stars Mammootty, Siddique, Manoj K. Jayan, [[]], Vinu Mohan and Raai Laxmi. The film's music was done by Alex Paul. 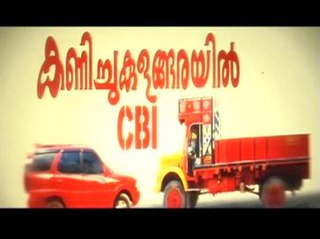 Kanichukulangarayil CBI is a 2008 Malayalam film by Suresh-Vinu having Manoj K. Jayan in the lead role. This movie is based on the real life incident Kanichukulangara murder case. 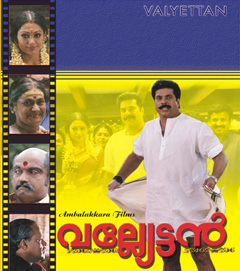 Valyettan is a 2000 Indian Malayalam-language action drama film directed by Shaji Kailas and scripted by Ranjith. It stars Mammootty, Shobana, Sai Kumar, N. F. Varghese, Siddique and Manoj K Jayan. It was remade in Kannada as Jyeshta by director Suresh Krissna with Vishnuvardhan in the lead role. The film was a blockbuster.

Chamayam is a 1993 Indian Malayalam-language drama film directed by Bharathan and written by John Paul, starring Manoj K. Jayan, Murali and Sithara in the lead roles. The film is about the lives of two fishermen who are also stage actors.

Pidakkozhi Koovunna Noottandu is a 1994 Indian Malayalam-language comedy-drama film directed by Viji Thampi and written by Sasidharan Arattuvazhi from a story by Urvashi, who also produced the film. Starring Urvashi, Manoj K. Jayan, Jagathy Sreekumar, Kalpana, K. P. A. C. Lalitha, Vinaya Prasad, Janardhanan, Ratheesh and Sai Kumar. The story revolves around paying guests in a female-only homestay who identify themselves as misandrists.

Vellaripravinte Changathi is a 2011 Malayalam film directed by Akku Akbar, starring Dileep and Kavya Madhavan in the lead roles. The film is loosely based on the famous Sulekha murder case.

Ardhanaari (2012) is a Malayalam film about the life of transgender people in Kerala. The film is directed by Santhosh Souparnika and produced by M. G. Sreekumar under his production house MG Sound & Frames.

Left Right Left is a 2013 Indian Malayalam-language political drama film from India, directed by Arun Kumar Aravind and written by Murali Gopy. Left Right Left revolves around the lives of Jayan, Roy, Sahadevan, Anitha and Jennifer. Released on 14 June 2013, the film was set in three periods – the 60s/70s, the 80s/90s and the present day. It got mostly positive reviews upon release but drew occasional criticism for some of its characters and scenes resembling real-life political leaders and incidents. However, it has gathered a cult status over the years as one of the finest political thrillers ever made in Malayalam. Murali Gopy's performance won him the 61st Filmfare Awards South for The Best Actor in a Supporting Role and Lena Kumar won Kerala State Film Award for the Second Best Actress.Filmicompanion in 2019 included Hareesh Peradi's performance in the Top 100 performances of the decade.

Koottu is a 2004 Indian Malayalam film, directed by Jayaprakash. The movie was produced by Asharaf Liwa, Faisal Babu and Muneer K. under the banner of Liwa Films International. The film stars Richard Rishi, Aravind Akash, Sai Kumar, Manoj K. Jayan and Thilakan in lead roles. The film had musical score by Mohan Sithara. This film was shot in St. Josephs Devigiri College, Kozhikode 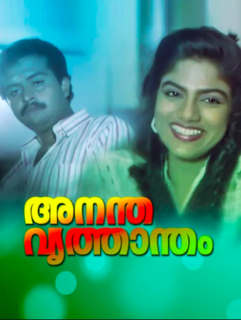 Anantha Vruthantham is a 1990 Indian Malayalam film, directed by Anil, starring Sai Kumar and Ranjini in the lead roles.

Aayiram Meni is a 1999 Indian Malayalam film, directed by I. V. Sasi, starring Manoj K. Jayan and Urvashi in the lead roles.