Thornbury railway station may refer to:

Thornbury is an inner suburb of Melbourne, Victoria, Australia, 7 km north of Melbourne's Central Business District. Its local government area is the City of Darebin. At the 2016 census, Thornbury had a population of 18,568.

Thornbury railway station is located on the Mernda line, in Victoria, Australia. It serves the north-eastern Melbourne suburb of Thornbury, and opened on 8 October 1889. 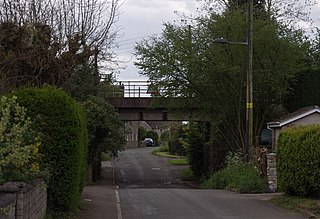 Tytherington is a village in South Gloucestershire, England. The quarry to the west belongs to Hanson plc. The parish population taken at the 2011 census was 666.

Warmley is a village in Gloucestershire, England.

The Tuatapere Branch, including the Orawia Branch, was a branch line railway in Southland, New Zealand. Although the Tuatapere and Orawia Branches look like a single line, operationally they were considered separate lines. The first section opened to Riverton in 1879 and reached Tuatapere three decades later. The extension from Tuatapere to Orawia operated from 1925 until 1970. In 1976 the Tuatapere Branch was truncated to Riverton, and was known as the Riverton Branch until 1978, when it closed beyond Thornbury. The remaining portion of the line is now part of the Wairio Branch.

Thornbury is a small township on the east bank of the lower Aparima River, in western Southland, New Zealand. It is approximately 10 km northeast of Riverton, and 31 km northwest of Invercargill. It is mainly a farming service community. Local small industries include machinery and transport/trucking companies, and a tannery.

Glen Mills station is a railroad station in Glen Mills, Pennsylvania currently used by the West Chester Railroad heritage railway. It is located at 130 Glen Mills Road, and owned by the Thornbury Historical Society. 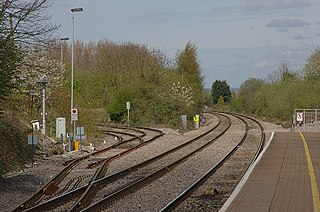 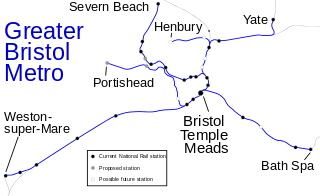 MetroWest, formerly known as the Greater Bristol Metro, is a project to improve the rail services in Bristol, England, and the surrounding region. It was first proposed at First Great Western's Stakeholder Event in March 2008. The aim of the project is to develop half-hourly services through central Bristol which will also serve the surrounding West of England region. Transport campaigning group, Transport for Greater Bristol are actively supporting the proposal, as are the four unitary authorities under the West of England Combined Authority.

GLOSS FM is an online community radio station in the United Kingdom, broadcasting to Thornbury and District, South Gloucestershire. Its strapline is "Your Local Station". It originally started broadcasting to the South Gloucestershire area on 19 April 2010. It was an extension of Thornbury FM, a smaller station broadcasting to just Thornbury which had started on 19 November 2005. In November 2009, the station relocated its transmitter which increased its coverage area. After an open competition GLOSS FM was chosen as the station's new name in order to be more relevant to all listeners. GLOSS FM legally broadcast under the terms of Ofcom's Restricted Service Licence regime until the spring of 2011. This restricted the station to a maximum of two 28-day broadcasts per year in addition to its webcasts which were broadcast continually. In this year the station closed after an unsuccessful licence bid for a permanent FM frequency which was rejected by Ofcom due to "no suitable FM frequency available" in the area - an assertion which they have since indicated is not correct. After a 6 year break and several attempts to restart it, the station re-launched on 29 July 2017.

Tyersal Beck is a watercourse in West Yorkshire, England, named after the village of Tyersal in whose vicinity it runs.