Thornett may refer to:

Alan Thornett is a British Trotskyist.

Richard Norman Thornett was one of five Australians to have represented their country in three sports. He was an Olympic water polo player before becoming a rugby league and rugby union player—a dual code international representative.

John Edward Thornett, MBE was an Australian rugby union player, who played 37 Tests for Australia between 1955 and 1967 and made an additional 77 representative match appearances. He captained Australia in 16 Test matches and on an additional 47 tour matches on the eight international rugby tours he made with Wallaby squads. 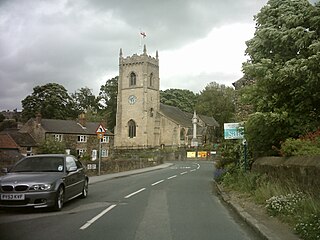 Thorner is a rural village and civil parish in the City of Leeds in West Yorkshire, England, located between Seacroft and Wetherby. It has a population of 1,503, increasing to 1,646 at the 2011 Census.

In Inuit mythology, the Tornat are a group of protective gods, led by Tornarsuk.

Clinton is an English surname, indicating one's ancestors came from English places called Glympton or Glinton. Clinton has frequently been used as a given name since the late 19th century. Baron Clinton is a title of peerage in England, originally created in 1298.

Hick is a surname or a nickname. Notable people with the name include:

Davies is a patronymic Welsh surname. It may be a corruption of Dyfed, itself a corruption of Dési, colonists from south-east Ireland who occupied the old tribal area of the Demetae in south-west Wales in the late third century AD, establishing a dynasty which lasted five centuries. Dyfed is recorded as a surname as late as the 12th century for e.g. Gwynfard Dyfed, born in 1175. 'Dafydd' appears as a given name in the 13th Century, e.g. Dafydd ap Gruffydd (1238–1283), Prince of Wales, and Dafydd ab Edmwnd, Welsh poet. The given name 'Dafydd' is generally translated into English as 'David'. Alternatively it may derive from David, the name of Wales's patron saint. In Wales Davies is standardly pronounced DAY-vis, that is, identically to Davis. This pronunciation is also used by many outside the United Kingdom, where it competes with the spelling pronunciation DAY-veez, which is particularly common in the US.

Turnbull is a northern English and Scottish surname. For theories of its etymology, see Clan Turnbull.

Frawley is a surname. Notable people with the surname include:

Tennant is a Scottish surname, and may refer to:

Cleary is an Irish surname; which derives from Gaelic Ó Cléirigh/Mac Cleirigh, meaning 'descendent or son of cleric. it may relate to:

Coen can be a masculine given name, a surname or a place name.

Gillett is a surname. Notable people with the surname include:

Houston is a surname of Scottish origin. In the mountains of Scotland's west coast and on the Hebrides islands, the ancestors of the Houston family were born. Clan Houston comes from the medieval Scottish given name Hugh. Houston is a patronymic surname, which belongs to the category of hereditary surnames. In general, patronyms were derived from either the first name of the father of the bearer, or from the names of famous religious and secular figures. By and large, surnames descending from one's father's name were the most common. The surname also came from the place called Houston, Renfrewshire in the west central Lowlands of Scotland. In Old English, the name Houston, meant the settlement belonging to Hugh.