Last updated March 07, 2019
Not to be confused with Thoth.
For the district in Vietnam, see Thốt Nốt District.

Thot is a given name and surname. Notable people with the name include:

Nyadak "Duckie" Thot is an Australian model. Thot finished in third place on the eighth cycle of Australia's Next Top Model and made her runway debut at the Yeezy S/S 17 show. She is best known for being a face of Fenty Beauty as well as playing the lead role in the Alice in Wonderland-inspired 2018 Pirelli Calendar.

Nim Thot is a Cambodian politician. He belongs to the Cambodian People's Party and was elected to represent Battambang in the National Assembly of Cambodia in 2003.

Tokke is a municipality in Telemark county, Norway. It is part of the traditional region of Vest-Telemark. The administrative centre of the municipality is the village of Dalen. The municipality of Tokke was created on 1 January 1964 upon the merger of the two older municipalities of Lårdal and Mo. Located in Lårdal, Eidsborg stave church is one of Norway's old stave churches. 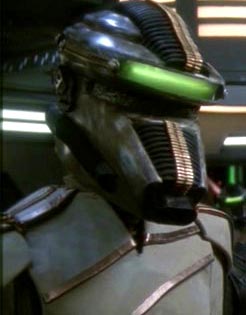 The Breen are a fictional extraterrestrial species that feature in the Star Trek science fiction franchise. They were first mentioned in "The Loss", a fourth-season episode of Star Trek: The Next Generation that first aired in 1990. References to them were made in several other Next Generation episodes, but they did not appear until the 1996 fourth season Star Trek: Deep Space Nine episode "Indiscretion". On Deep Space Nine, they played a significant role in the final story arc of that series in 1999, during which much information about them was revealed. The Breen's true appearance remains unrevealed to viewers, as they have never been seen onscreen without their helmets.

"Etteilla", the pseudonym of Jean-Baptiste Alliette, was the French occultist who was the first to popularise tarot divination to a wide audience (1785), and therefore the first professional tarot occultist known to history who made his living by card divination. Etteilla published his ideas of the correspondences between the tarot, astrology, and the four classical elements and four humors, and was the first to issue a revised tarot deck specifically designed for occult purposes (1791).

Dan Khun Thot is a district (amphoe) in the western part of Nakhon Ratchasima Province, Thailand.

Thepharak is a district (amphoe) in the northwestern part of Nakhon Ratchasima Province.

Kham Thale So is a district (amphoe) of Nakhon Ratchasima Province, northeastern Thailand.

Bueng Sam Phan is a district (amphoe) in the southern part of Phetchabun Province, northern Thailand.

Cassiopeia is a 1996 Brazilian CGI animated feature film produced and released by NDR Filmes in Brazil on April 1, 1996. The film is an adventure about the invasion of planet Ateneia by intruders trying to steal their energy.

Cờ Đỏ is a rural district of Cần Thơ in the Mekong Delta region of Vietnam. As of 2003 the district had a population of 158,467. The district covers an area of 403 km². The district capital lies at Thới Lai.

Thốt Nốt is the main urban district of the city of Cần Thơ in the Mekong Delta region of Vietnam. To the south and west it borders Vĩnh Thạnh District and An Giang Province, and to the north with Đồng Tháp Province. As of 2003 the district had a population of 192,327. By 2007 this had risen to 196,610. The district covers an area of 171 km². The district capital lies at Thốt Nốt.

Yam naem in Thai cuisine can refer to two salads, originally from the Isan region, that are made with fermented pork sausage :

Nam chim or nam jim is Thai for "dipping sauce". It can refer to a wide variety of dipping sauces in Thai cuisine, with many of them a combination of salty, sweet, spicy and sour. 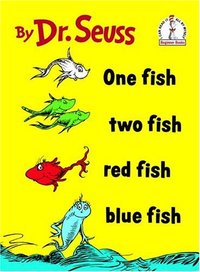 One Fish, Two Fish, Red Fish, Blue Fish is a 1960 children's book by Dr. Seuss. It is a simple rhyming book for beginning readers, with a freewheeling plot about a boy and a girl named Jay and Kay and the many amazing creatures they have for friends and pets. Interspersed are some rather surreal and unrelated skits, such as a man named Ned whose feet stick out from his bed, a creature who has a bird in his ear, and one man named Joe who cannot hear the other man's call. As of 2001, over 6 million copies of the book had been sold, placing it 13th on a list of "All-Time Bestselling Children's Books" from Publishers Weekly. Based on a 2007 online poll, the United States' National Education Association labor union named the book one of its "Teachers' Top 100 Books for Children."

Jennifer Leigh "Jen" Selter is an American Internet celebrity and fitness model. She attracted significant media attention for her debut at a young age, initially on the photo-sharing app Instagram. As of March 2019, Jen Selter had 12.7 million followers on Instagram.

The Rondo in C minor is a composition for string quartet by the Austrian composer Anton Bruckner. It was written in 1862 but was not performed publicly until 1984, after the composer's death. A critical edition was first published in 1985 and the piece was first recorded in 1992 by the Raphael Quartet. 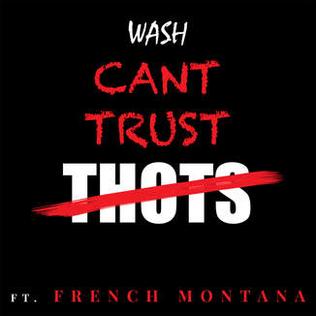 "Can't Trust Thots" is a song by American singer Wash featuring American rapper French Montana. It was released on September 30, 2014, by Aye Girl Group, Interscope Records and Polydor Records. A remix featuring Waka Flocka Flame instead of Montana was released in March 2015.

Matthew Hauri, known professionally as Yung Gravy, is a rapper and songwriter from Rochester, Minnesota. He is known for his 2016 single "Mr. Clean". Other top hits include, "1 Thot 2 Thot Red Thot Blue Thot" and his 2018 single "Alley Oop" feat. Lil Baby.Since 2017, the rapper has completed two North American tours, with support from acts such as Ugly God. He has released four EPs and one mixtape.