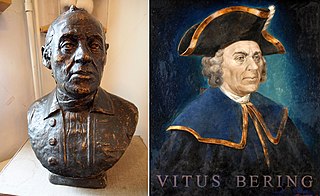 Vitus Jonassen Bering, also known as Ivan Ivanovich Bering, was a Danish cartographer and explorer in Russian service, and an officer in the Russian Navy. He is known as a leader of two Russian expeditions, namely the First Kamchatka Expedition and the Great Northern Expedition, exploring the north-eastern coast of the Asian continent and from there the western coast on the North American continent. The Bering Strait, the Bering Sea, Bering Island, the Bering Glacier and the Bering Land Bridge were all named in his honor.

Barton may refer to:

A monolith is a geological feature consisting of a single massive stone or rock, such as some mountains, or a single large piece of rock placed as, or within, a monument or building. Erosion usually exposes the geological formations, which are often made of very hard and solid igneous or metamorphic rock.

Drake may refer to:

Barry Island is a district, peninsula and seaside resort, forming part of the town of Barry in the Vale of Glamorgan, South Wales. It is named after the 6th century Saint Baruc. Barry's stretch of coast, on the Bristol Channel, has the world's second highest tidal range of 15 metres (49 ft), second only to Bay of Fundy in Eastern Canada. 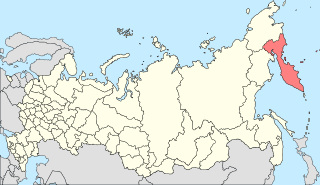 The Kamchatka Peninsula is a 1,250-kilometre-long (780 mi) peninsula in the Russian Far East, with an area of about 270,000 km2 (100,000 sq mi). The Pacific Ocean and the Sea of Okhotsk make up the peninsula's eastern and western coastlines, respectively. Immediately offshore along the Pacific coast of the peninsula runs the 10,500-metre-deep (34,400 ft) Kuril–Kamchatka Trench.

White Rock or White Rocks may refer to:

Aleksei Ilyich Chirikov was a Russian navigator and captain who along with Bering was the first Russian to reach North-West coast of North America. He discovered and charted some of the Aleutian Islands while he was deputy to Vitus Bering during the Great Northern Expedition.

Narooma is a town in the Australian state of New South Wales on the far south coast. The town is on the Princes Highway and the name Narooma is said to be derived from the Aboriginal word meaning ‘clear blue waters’. At the 2016 census, Narooma had an urban population of over 3,000 people.

Danger Island(s) may refer to:

As sealing at Bass Strait and the Antipodes Islands declines, Foveaux Strait becomes the focus for sealers from the middle of the year. The Bounty and Auckland Islands are also visited. Whaling is carried out on the east coast of New Zealand with the Bay of Islands being the usual port of call for provisioning. As many as nine ships whaling together for months at a time can occur. The behaviour of the whalers at the Bay of Islands is again commented on unfavourably, this time by a former missionary on one of the whaling ships. There are also a number of vessels collecting sandalwood from Tonga or Fiji; the majority call at the Bay of Islands en route. 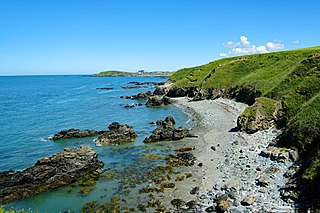 Anglesey is an island off the north-west coast of Wales. It forms the principal area and historic county of that name, which includes Holy Island to the west and some islets and skerries. Anglesey island, at 260 square miles (673 km2), is by far the largest island in Wales, the seventh largest in the British Isles, largest in the Irish Sea and second most populous after the Isle of Man. The local government area of Isle of Anglesey County Council measures 276 square miles (715 km2), with a 2011 census population of 69,751, of whom 13,659 live on Holy Island. The Menai Strait between Anglesey and mainland Wales is spanned by the Menai Suspension Bridge, designed by Thomas Telford in 1826, and the Britannia Bridge, built in 1850 and replaced in 1980. The largest town is Holyhead, whose port handles over 2 million passengers a year to and from Ireland. The next largest is Llangefni, seat of the county council. From 1974 to 1996 Anglesey was run as part of Gwynedd. Most Anglesey inhabitants are Welsh speakers. The name Ynys Môn is used for the UK Parliament and Senedd constituencies. The island is part of the LL postcode area (LL58–LL78).

Brother Island or Brothers Island may refer to any of several islands and island groups around the world, including

Regional geology is the geological study of large-scale regions. Usually, it encompasses multiple geological disciplines to piece together the history of an area. It is the geologic equivalent of regional geography. The size and the borders of each region are defined by geologically significant boundaries and by the occurrence of geologic processes. Examples of geologically significant boundaries are the interfingering facies change in sedimentary deposits when discussing a sedimentary basin system, or the leading or boundary thrust of an orogen.

Mid–Coast Council is a local government area (LGA) located in the Mid North Coast region of New South Wales, Australia. The council was formed on 12 May 2016 through a merger of the Gloucester Shire, Great Lakes and City of Greater Taree councils.