The Three Princes was a name given to Princes Boun Oum, Souvanna Phouma and Souphanouvong who represented respectively the royalist, neutralist and leftist factions in the Kingdom of Laos in the post-WWII period. [1] The trio were named by King Savang Vatthana to form a coalition government following the independence of Laos. [1] 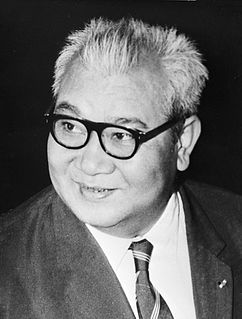 Prince Boun Oum was the son of King Ratsadanay, and was the hereditary prince of Champassak and also Prime Minister of the Kingdom of Laos from 1948–1950 and again in 1960–1962. 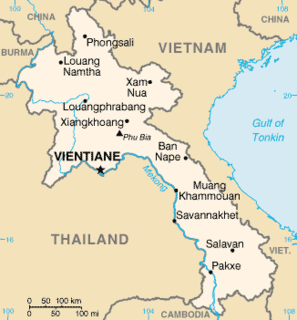 The Laotian Civil War (1959–75) was fought between the Communist Pathet Lao and the Royal Lao Government, with both sides receiving heavy external support in a proxy war between the global Cold War superpowers. It is called the Secret War among the CIA Special Activities Division and Hmong veterans of the conflict.

Phoui Sananikone was Prime Minister of the Kingdom of Laos on two occasions in 1950 to 1951 and again from 1958 to 1959, and also served as Foreign Minister on multiple occasions. 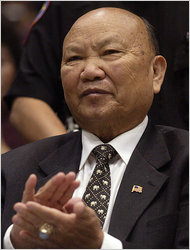 Vang Pao was a major general in the Royal Lao Army. He was a leader in the Hmong American community in the United States.

Captain Kong Le was a paratrooper in the Royal Lao Army. He led the premier unit of the Royal Lao Army, Bataillon Parachutistes 2, which campaigned relentlessly during 1959 and 1960. The idealistic young American-trained Lao Theung officer became known worldwide when on 10 August 1960 he and his mutinous paratroopers overthrew the Royal Lao Government in a coup d'état. He declared he aimed at an end to government corruption; to the shock of American officials, he declared U.S. policies were responsible for the ongoing fraud.

Half brother of Souvanna Phouma, Prince Souphanouvong, a staunch communist and the leader of the Pathet Lao, was supported by Kaysone Phomvihane (later Prime Minister and President of the LPDR) and the North Vietnamese. By 1972, the Pathet Lao found it unacceptable to form a coalition with rightist members, mostly military generals and the rich and powerful Na Champassak and Sananikone families. [3]

The Pathet Lao was a communist political movement and organization in Laos, formed in the mid-20th century. The group was ultimately successful in assuming political power in 1975, after the Laotian Civil War. The Pathet Lao were always closely associated with Vietnamese communists. During the civil war, it was effectively organized, equipped and even led by the People's Army of Vietnam. They fought against the anti-communist forces in the Vietnam War. Eventually, the term became the generic name for Laotian communists.

The Kingdom of Laos was a constitutional monarchy that ruled Laos beginning with its independence on 9 November 1953. The monarchy survived until December 1975, when its last king, Savang Vatthana, surrendered the throne to the Pathet Lao, who abolished the monarchy in favor of a Marxist state called the Lao People's Democratic Republic, which has controlled Laos since.

Prince Phetsarath Ratanavongsa was the 1st Prime Minister of Laos from 8 April to 20 October 1945, and was the first and last vice-king of the Kingdom of Laos.

Soth Phetrasy (1915–2004) was a leading official of the Pathet Lao, the communist guerrilla movement of Laos associated with the Lao People's Party, during the 1960s and 1970s. 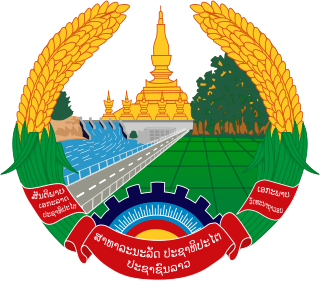 Parliamentary elections were held in Laos on 4 May 1958, in order to elect an additional 21 seats to the enlarged National Assembly. The Lao Patriotic Front won the most seats, although the ruling National Progressive Party remained the largest party in the Assembly, holding 26 of the 60 seats. Voter turnout was 82.1%.

The Committee for the Defence of National Interests was an anti-communist right-wing political party founded in the Kingdom of Laos on 17 June 1958. Dismayed by the election of Lao communists to the National Assembly in the May 1958 elections, younger politicians and military officers founded CDNI as an alternative to older Lao politicians and senior officers then in power. The CDNI pronounced itself as a force for anti-corruption efforts in the Royal Lao Government. It was backed by the United States embassy; American support was manifested in political advice and civic actions such as Operation Booster Shot. In the 24 April 1960 elections, which were obviously rigged, the CDNI won 32 of 59 seats. The Pathet Lao leadership had been detained during the election; on 23 May 1960, they escaped to join their insurrection in the mountains. This ended the governing coalition, and fighting began in the Laotian Civil War.

Quinim Pholsena was a leftist minister and the Foreign Minister of the Kingdom of Laos from 1962 to 1963, under Prime Minister Souvanna Phouma.

Colonel Bounleuth Saycocie was a Lao military and political figure of the Second Indochina War.

The following lists events that happened during 1950 in Laos. 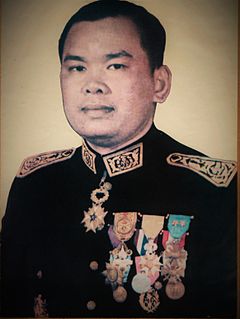 Kou Voravong was a Laotian politician. He was part of the anti-Japanese resistance leading group during the Second World War and after then anti-Lao Issara (ລາວອິດສລະ) in the post-war period. Throughout his career, from 1941 to 1954, he has been District Chief, Province Governor, member of the Lao National Assembly, and Lao Royal Government Minister.