Three Women may refer to: 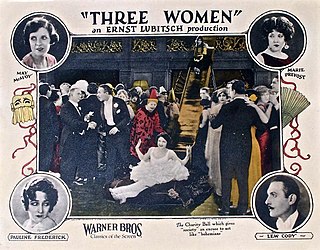 Three Women is a 1952 French film directed by André Michel. It was entered into the 1952 Cannes Film Festival.

3 Women is a 1977 American avant-garde drama film written and directed by Robert Altman and starring Shelley Duvall, Sissy Spacek and Janice Rule. It depicts the increasingly bizarre, mysterious relationship between a woman (Duvall) and her roommate and co-worker (Spacek) in a dusty, underpopulated Californian desert town.

Three Women is a 2019 non-fiction book by Lisa Taddeo. It is her debut book and was published on July 9, 2019 by Avid Reader Press, an imprint of Simon & Schuster. It covers the sex lives of three different women from different backgrounds and regions of the United States. It debuted at number one on The New York Times non-fiction best sellers list and received mixed reviews from critics.

Three Women is a painting by Italian artist Umberto Boccioni, executed between 1909 and 1910. This painting is oil on canvas painted in the style of divisionism. Divisionism refers to the actual division of colors by creating separated brush strokes as opposed to smooth, solid lines. The painting contains three figures, one being Boccioni’s mother Cecilia on the left, another being his sister, Amelia on the right, and the third being Ines, his lover, in the center. 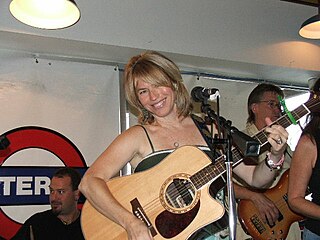 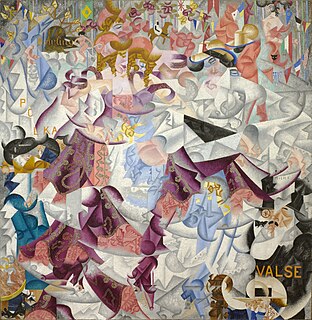 Futurism was an artistic and social movement that originated in Italy in the early 20th century. It emphasised speed, technology, youth, violence, and objects such as the car, the airplane, and the industrial city. Its key figures were the Italians Filippo Tommaso Marinetti, Umberto Boccioni, Carlo Carrà, Gino Severini, Giacomo Balla, and Luigi Russolo. It glorified modernity and aimed to liberate Italy from the weight of its past. Cubism contributed to the formation of Italian Futurism's artistic style. Important Futurist works included Marinetti's Manifesto of Futurism, Boccioni's sculpture Unique Forms of Continuity in Space, Balla's painting Abstract Speed + Sound, and Russolo's The Art of Noises. 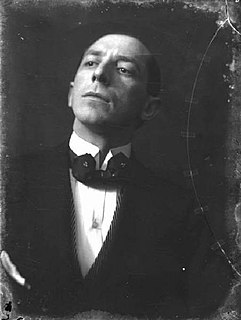 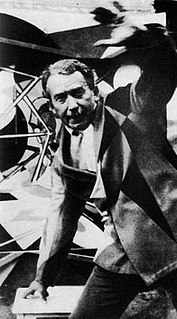 Giacomo Balla was an Italian painter, art teacher and poet best known as a key proponent of Futurism. In his paintings he depicted light, movement and speed.

Gino Severini was an Italian painter and a leading member of the Futurist movement. For much of his life he divided his time between Paris and Rome. He was associated with neo-classicism and the "return to order" in the decade after the First World War. During his career he worked in a variety of media, including mosaic and fresco. He showed his work at major exhibitions, including the Rome Quadrennial, and won art prizes from major institutions.

The Estorick Collection of Modern Italian Art is a museum in Canonbury Square in the district of Islington on the northern fringes of central London. It is the United Kingdom's only gallery devoted to modern Italian art and is a registered charity under English law.

Outcast or Outcasts may refer to:

The Accademia Carrara is an art gallery and an academy of fine arts in Bergamo, Italy. 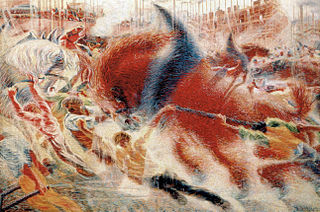 The City Rises (1910) is a painting by the Italian painter Umberto Boccioni. It was his first major Futurist work.

The Street Enters the House is an oil on canvas painting by Italian artist Umberto Boccioni. Painted in the Futurist style, the work centres on a woman on a balcony in front of a busy street, with the sounds of the activity below portrayed as a riot of shapes and colours.

The Gallerie di Piazza Scala is a modern and contemporary museum in Milan, Italy. Located in Piazza della Scala in the Palazzo Brentani and the Palazzo Anguissola, it hosts 195 artworks from the collections of Fondazione Cariplo with a strong representation of nineteenth century Lombard painters and sculptors, including Antonio Canova and Umberto Boccioni. A new section was opened in the Palazzo della Banca Commerciale Italiana on October 25, 2012 with 189 art works from the twentieth century.

Development of a Bottle in Space is a bronze futurist sculpture by Umberto Boccioni. Initially a sketch in Boccioni’s "Technical Manifesto of Futurist Sculpture"," the design was later cast into bronze by Boccioni himself in the year 1913. Consistent with many of themes in Boccioni’s manifesto, the work of art highlights the artist’s first successful attempt at creating a sculpture that both molds and encloses space within itself.

Arnaldo Ginna, also known as Arnaldo Ginanni Corradini, was an Italian painter, sculptor and filmmaker. He was born in Ravenna, 7 May 1890; he died in Rome, 26 September 1982. 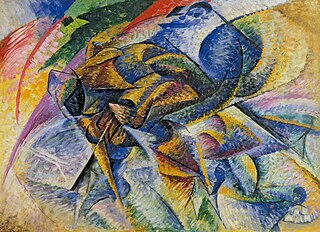 Dynamism of a Cyclist is a 1913 painting by Italian Futurist artist Umberto Boccioni (1882–1916) that demonstrates the Futurist preoccupation with speed, modern methods of transport, and the depiction of the dynamic sensation of movement.

Antigrazioso or L'antigrazioso, also known as The Mother, is a patinated gesso sculpture by Umberto Boccioni realized between 1912 and 1913; it is located in the Galleria nazionale d'arte moderna e contemporanea of Rome.

Dynamism of a Human Body: Boxer is a dynamism drawing created by the futurist Italian artist Umberto Boccioni. The work was intended to show a subject in between a state of motion and stillness. 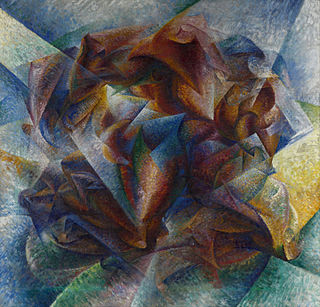 Dynamism of a Soccer Player is a 1913 Futurist painting by Italian artist Umberto Boccioni (1882–1916). It is currently held in the Museum of Modern Art.