Three strikes or 3 Strikes may refer to: 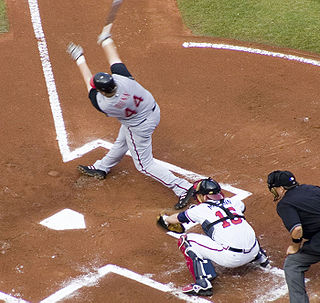 In baseball or softball, a strikeout occurs when a batter racks up three strikes during a time at bat. It usually means the batter is out. A strikeout is a statistic recorded for both pitchers and batters, and is denoted by K. A "strikeout looking" — in which the batter does not swing and the third strike is called by the umpire — is usually denoted by a ꓘ.

Three Strikes is a black & white comic book series from Oni Press written by Nunzio DeFilippis and Christina Weir, featuring art by Brian Hurtt. Three Strikes is a crime drama about Rey Quintana, a young man with a troubled past who is trying to make something of his life when he makes a bad decision and shoplifts a present for his girlfriend. Sentenced to more than 20 years for his minor crime due to California's "Three Strikes And You're Out" laws, Rey goes on the run. The story is also about bounty hunter Noah Conway, an ex-cop who has screwed up his personal life and who has no sympathy for lawbreakers like Rey. When Rey goes on the run, Noah is hired to bring him in, and the two men both undergo radical transformations as one hunts the other.

Project Appleseed is a rifle marksmanship clinic that focuses on teaching traditional rifle marksmanship from standing, sitting/kneeling, and prone positions over a two-day weekend shooting clinic for what is termed an "Appleseed". It is one of the major activities of The Revolutionary War Veterans Association (RWVA), a 501(c)(3) non-profit organization that teaches and promotes traditional rifle marksmanship, while also teaching American heritage and history with the intent of encouraging people to become active civically. Project Appleseed is apolitical, a legal requirement of 501(c)(3) organizations.

Randall David Johnson, nicknamed "The Big Unit", is an American former professional baseball pitcher who played 22 seasons in Major League Baseball (MLB), from 1988 to 2009, for six teams. He played primarily for the Seattle Mariners and Arizona Diamondbacks. His 303 career victories rank as the fifth-most by a left-hander in MLB history, while his 4,875 strikeouts place him second all-time behind Nolan Ryan and are the most by a left-hander. He holds five of the seven highest single-season strikeout totals by a left-hander in modern history. Johnson won the Cy Young Award five times, second only to Roger Clemens' seven, and he is one of only two pitchers to win the award in four consecutive seasons (1999–2002). In 1999, he joined Pedro Martínez and Gaylord Perry in the rare feat of winning the award in both the American and National Leagues. He is also one of five pitchers to pitch no-hitters in both leagues. On May 18, 2004, at the age of forty, Johnson became the oldest pitcher in major league history to throw a perfect game, and is one of seven pitchers who have thrown both a perfect game and a no-hitter in their careers. He is also one of eighteen pitchers in history to record a win against all 30 MLB franchises. On May 8th 2001, Johnson achieved the feat of striking out 20 batters in one game, doing so against the Cincinnati Reds.

The 1958 World Series was a rematch of the 1957 World Series, with the New York Yankees beating the defending champion Milwaukee Braves in seven games for their 18th title, and their seventh in 10 years. With that victory, the Yankees became only the second team in Major League Baseball history to come back from a 3–1 deficit to win a best-of-seven World Series; the first was the Pittsburgh Pirates in 1925. These teams would meet again in the fall classic thirty-eight years later—by that time, the Braves had moved to Atlanta. As of 2019, this is the most recent World Series featuring the two previous Series winning teams. 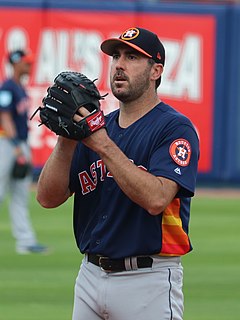 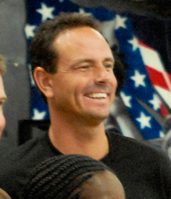 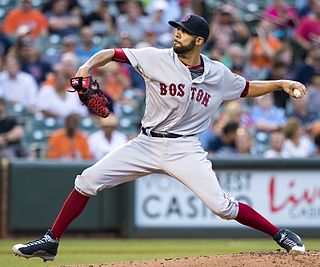 David Taylor Price is an American professional baseball pitcher for the Boston Red Sox of Major League Baseball (MLB). Price was selected first overall in the 2007 Major League Baseball draft by the Tampa Bay Devil Rays and made his MLB debut in September 2008. He has also played for the Detroit Tigers and Toronto Blue Jays. 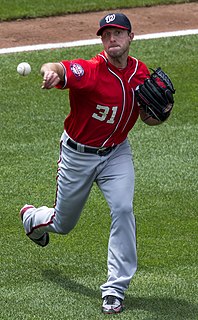 Maxwell M. Scherzer is an American professional baseball pitcher for the Washington Nationals of Major League Baseball (MLB). Nicknamed "Mad Max", he made his MLB debut as a member of the Arizona Diamondbacks in 2008, and later played for the Detroit Tigers. He has been an important figure in the both the Tigers' and Nationals' playoff presence, including Detroit's four consecutive American League Central titles from 2011 to 2014 and two of Washington's National League East titles. A power pitcher with a low three-quarter-arm delivery, Scherzer has achieved numerous strikeout records and distinctions. He is the tenth pitcher in history to garner at least three Cy Young Awards, the sixth to record two no-hitters in one season, the fifth to produce more than one immaculate inning, and the second to strike out at least 200 batters in a season eight years in a row.

In baseball, striking out the side refers to when a pitcher strikes out all the batters he faces in the defensive half-inning in which he pitches. There is no official statistic in regard to this accomplishment, though it is often noted by commentators and fans when it occurs.

The 2013 American League Division Series were two best-of-five-game series to determine the teams that would participate in the 2013 American League Championship Series. The three divisional winners and a fourth team — the winner of a one-game Wild Card playoff — played in two series. TBS carried most of the games, with some on MLB Network. 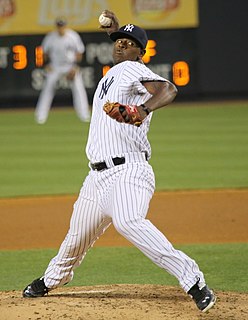 Luis Severino is a Dominican professional baseball pitcher for the New York Yankees of Major League Baseball (MLB). He made his Major League debut in 2015. After a rough 2016 season, he broke out as one of the league's best pitchers in 2017, being named an All-Star and finishing third in the American League Cy Young Award vote.

The 2015 American League Championship Series (ALCS) was a best-of-seven playoff contested between the Toronto Blue Jays and Kansas City Royals for the American League (AL) pennant and the right to play in the 2015 World Series. The series is the 46th in league history. The series was broadcast by Fox and Fox Sports 1 in the United States, with Fox airing Game 1 and Fox Sports 1 airing Games 2–6. Sportsnet, a property of Blue Jays owner Rogers Communications, simulcast Fox and Fox Sports 1's coverage in Canada. Game 1 took place on October 16, and the series ended with the Royals winning Game 6 on October 23.