The three wishes joke (or genie joke) is a joke format in which a character is given three wishes by a supernatural being, and fails to make the best use of them. [1] [2] Common scenarios include releasing a genie from a lamp, catching and agreeing to release a mermaid or magical fish; or crossing paths with the devil.

The first two wishes go as expected, with the third wish being misinterpreted, or granted in an unexpected fashion that doesn't reflect the intent of the wish. [3] Alternatively, the wishes are split between three people, with the last person's wish inadvertently or intentionally thwarting or undoing the wishes of the other characters.

An example of the three wishes joke runs as follows:

Three men are stranded on a desert island, when a bottle washes up on the shore. When they uncork the bottle, a genie appears and offers three wishes. The first wishes to be taken to Paris. The genie snaps his fingers, and the man suddenly finds himself standing in front of the Eiffel Tower. The second man wishes that he were in Hollywood, and with a snap of the genie's fingers, he finds himself on a Tinseltown movie set. The third man, now alone on the island, looks around and says, "I wish my friends were back."

One variation on the theme has the protagonist turning the tables on the genie, who for some contrived reason has placed a condition on the wishes that would result in an opponent of the protagonist also benefiting from the wishes. An example of this joke was used in The Simpsons episode, "Homer Simpson, This Is Your Wife". There, a character tells Marge Simpson a joke in which a genie promises to grant a man whatever he wishes, with the caveat that the man's wife's lover gets double whatever the man gets. After first wishing for a house and a car, the man wishes to be beaten "half to death" — which Marge doesn't understand.

A very early version of the joke is found in an 1875 book of Scottish anecdotes. There, a Scottish highlander is asked what his three wishes would be. He first wishes for a lake full of whisky. His second wish is for a similar quantity of good food. When asked for his third wish, after a moment of indecision, he asks for a second lake full of whisky. [4]

Yet another variation is the one where the first wishes go wrong and through the last one, the protagonist(s) end up exactly the way they were from the beginning. An example of this is the following, taken from Charles Perrault's story The Ridiculous Wishes:

A poor starving peasant couple are granted three wishes and the woman, just taking the first thing that comes to her mind, wishes for one sausage, which she receives immediately. Her husband, pointing out that she could have wished for immense wealth or food to last them a lifetime, becomes angry with her for making such a stupid wish and, not thinking, wishes the sausage were stuck on her nose. Sure enough, the sausage is stuck in the middle of her face, and then they have to use the third wish to make it go away, upon which it disappears completely.

The format is not always used for humor. In "The Monkey's Paw", a horror short story by author W. W. Jacobs, the paw of a dead monkey is a talisman that grants its possessor three wishes, but the wishes come with an enormous price. In the story, the recipient of the monkey's paw wishes for £200, only to learn that his son has been killed in a terrible work accident, for which the employer makes a goodwill payment of £200. Later, the mother asks that the dead son be wished back to life. Upon hearing strange sounds and a knock at the door, the father realizes that the thing outside would be a horribly mutilated body, and wishes it away.

In its original sense, a shaggy dog story or yarn is an extremely long-winded anecdote characterized by extensive narration of typically irrelevant incidents and terminated by an anticlimax.

"The Man in the Bottle" is episode 38 of the American television series The Twilight Zone. It originally aired on October 7, 1960 on CBS.

"The Monkey's Paw" is a supernatural short story by author W. W. Jacobs, first published in England in the collection The Lady of the Barge in 1902. In the story, three wishes are granted to the owner of The Monkey's Paw, but the wishes come with an enormous price for interfering with fate. 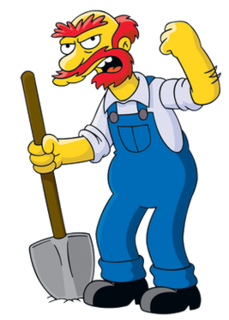 Dr. William MacDougal, better known as Groundskeeper Willie, is a recurring character on The Simpsons, voiced by Dan Castellaneta. He is the head groundskeeper at Springfield Elementary School. Willie is almost feral in nature and is immensely proud of his Scottish origin. He is easily identifiable by his red hair and beard, as well as his aggressive temperament and thick, stereotypical Scottish accent.

"The Two Mrs. Nahasapeemapetilons" is the seventh episode of The Simpsons' ninth season. It originally aired on the Fox network in the United States on November 16, 1997. It was written by Richard Appel and directed by Steven Dean Moore. The episode sees Apu Nahasapeemapetilon marry Manjula, and incorporates several aspects of Hindu wedding ceremonies, which the writers researched during the episode's production. Appel pitched the episode several years before season nine but the idea was not used until Mike Scully became showrunner. The episode's subplot, which sees Homer stay at the Springfield Retirement Castle, was initially conceived as a separate episode, but could not be developed in enough detail.

Russian jokes, the most popular form of Russian humor, are short fictional stories or dialogs with a punch line.

"Brush with Greatness" is the eighteenth episode of The Simpsons' second season. It originally aired on the Fox network in the United States on April 11, 1991. In the episode, Marge revives her high school-era interest in painting by enrolling in an art class after getting encouraged by Lisa. When she wins first prize in a local art competition for a portrait of Homer on the couch in his underwear, Mr. Burns commissions her to paint a portrait of him. Meanwhile, Homer is determined to lose weight after becoming stuck in a water slide at an amusement park.

"Treehouse of Horror II" is the seventh episode of The Simpsons' third season. It first aired on the Fox network in the United States on October 31, 1991. It is the only Treehouse of Horror episode to date where each segment name is not stated inside the episode. It is the second annual Treehouse of Horror episode, consisting of three self-contained segments, told as dreams of Lisa, Bart and Homer. In the first segment, which was inspired by W. W. Jacobs's short story The Monkey's Paw and The New Twilight Zone episode "A Small Talent for War", Homer buys a Monkey's Paw that has the power to grant wishes, although all the wishes backfire. In the second part, which parodies the Twilight Zone episode "It's a Good Life", Bart is omnipotent, and turns Homer into a jack-in-the-box, resulting in the two spending more time together. In the final segment, Mr. Burns attempts to use Homer's brain to power a giant robotic laborer.

"It's a Mad, Mad, Mad, Mad Marge" is the twenty-first episode of The Simpsons eleventh season. It first aired in the United States on the Fox network on May 14, 2000. After a failed marriage attempt with Otto, Becky stays with the Simpson family. However, Marge begins to get paranoid at her family's newfound love of Becky, and begins to think that she is seducing Homer.

"Homer Alone" is the fifteenth episode of The Simpsons' third season and the fiftieth overall. It originally aired on the Fox network in the United States on February 6, 1992. In the episode, stress from doing housework and being underappreciated at home causes Marge to have a mental breakdown and she decides to go on a vacation. She leaves for a spa called Rancho Relaxo, putting Bart and Lisa into the care of her sisters Patty and Selma and leaving Maggie at home with Homer.

Genie in the House is a British sitcom broadcast on Nickelodeon UK about a widowed father (Philip) with two teenage daughters who find a dusty old golden lamp while exploring the loft of their new home. A quick rub of the lamp releases Adil, a trainee genie from Balamkadaar who has been confined to life in the lamp for a thousand years. Philip has banned any use of magic in the house, yet the girls and Adil the Genie find ways to get themselves into trouble using Adil's wish granting powers. 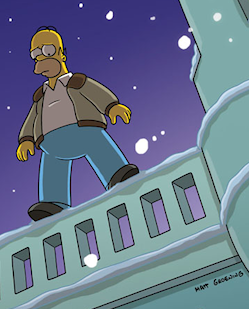 "Eternal Moonshine of the Simpson Mind" is the ninth episode of The Simpsons' nineteenth season. It first aired on the Fox network in the United States on December 16, 2007.

Genies frequently occur as characters or plot elements in fictional works. They are often divided into different categories, of which the most prominent are marid, genie or jinn, and ifrit.

"The Real Housewives of Fat Tony" is the nineteenth episode of The Simpsons' twenty-second season. It first aired on the Fox network in the United States on May 1, 2011. This episode mainly centers around Marge Simpson and one of her older sisters, Selma, who falls in love with mobster Fat Tony II. Selma later begins the glamorous lifestyle associated with being in the Mafia and the couple agree to marry each other. The marriage leads to tension between Marge and Selma. Fat Tony later invites Homer and Marge to his mansion in New Jersey, in hopes of mending the sisters' relationship. Meanwhile, Bart acquires an ability to trace the location of truffles, which leads Lisa to attest to her growing greed for eating truffles. 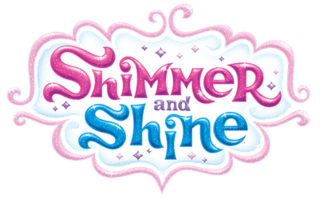 Shimmer and Shine is an American animated television series, created by Farnaz Esnaashari-Charmatz. It airs on Nick Jr. in the United States and on Treehouse in Canada. The series is based on an unreleased pilot from 2013, and premiered on Nickelodeon on August 24, 2015. It was renewed for a fourth season of 20 episodes on October 20, 2018. 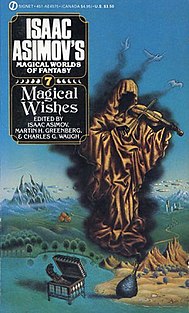 Magical Wishes is an anthology of themed fantasy and science fiction short stories on the subject of wishes edited by Isaac Asimov, Martin H. Greenberg and Charles G. Waugh as the seventh volume in their Isaac Asimov's Magical Worlds of Fantasy series. It was first published in paperback by Signet/New American Library in November 1986. The first British edition was issued in trade paperback by Robinson in July 1987.