Through the Looking Glass (Angel)

"Through the Looking Glass" is episode 21 of season 2 in the television show Angel . Written and directed by Tim Minear, it was originally broadcast on May 15, 2001 on the WB network. It is the second episode in a three-part arc.

In "Through the Looking Glass", Angel and the others are still trapped in the Pylea dimension. Cordelia finds herself appointed ruling princess of Pylea by an order of priests and ordered to mate with a human-like creature called the Groosalugg, while Angel seeks to help Lorne the Host bond with his estranged family, which takes a turn when Angel saves a runaway human slave, named Winifred "Fred" Burkle, the same L.A. librarian who was sucked into Pylea five years earlier. Also, Wesley and Gunn manage to escape from the castle only to end up as captives of human Pylean rebels plotting to overthrow the monarchy.

Angel, Wesley, and Gunn are shocked to see Cordelia has been crowned princess of Pylea. She jokingly demands their heads be cut off, but quickly restates herself. After she dismisses the guards, Cordelia recounts how she became princess due to her visions. Lorne confirms his people have been waiting for one cursed with the sight that will save them all.

Lorne takes Angel to his family's house, where Lorne's cousin Landok identifies Angel as a hero. Angel, who is made the special guest of their upcoming village feast, tells stories to the people of Pylea while Lorne is ignored. Landok offers Angel the honor of "swinging the crebbil in the Bach-nal," and Angel agrees to take part - before he learns it means beheading a human so the people of Pylea can feast on it. Winifred “Fred” Burkle is brought forth, but Angel refuses to kill her. The two are able to make an escape when Lorne begins to sing, causing severe pain to the Pyleans.

While perusing the castle library, Wesley discovers "the cursed one" will have to perform something called a "com-shuk" with a Groosalugg. He considers asking the priests to translate the book, until he realizes it is part of a trilogy marked with three animals - wolf, ram and hart - linking the priests to the evil law firm back in Los Angeles. Silas, one of the priests, arrives to inform Cordelia that the Groosalugg has been summoned and that the "com-shuk" is a mating ritual. Wesley, Gunn, and Cordelia try to escape through a sewer tunnel, but Cordelia is caught by the priests and dragged back to her throne. Heavily guarded, Cordelia worries about mating with the demon, until Silas introduces the Groosalugg, who is a handsome and muscular young male.

Fred leads Angel to a cave where she has been staying for a long while. Fred talks nervously as she crazily scribbles on the cave walls. Angel finds Fred's driver's license and realizes she is the girl from Cordy's vision. She doesn't believe him when he tells her of her life in LA and how she got to Pylea because it's been so long, she's doesn't want to believe. Angel is attacked by guards as he tries to lead Fred to the castle, and when he tries to shift into his vampire face, instead he becomes pure demon and brutally rips through the guard's body with his super-sized teeth. The other runs and Angel takes off as well, leaving Fred frightened and alone. Wesley and Gunn wander lost, until the demon Angel attacks them. It takes a while before Wesley can recognize Angel's tattoo. A short distance away, Fred coats her hand in blood and is able to lure Angel away from his friends with the smell. Demon Angel sees his reflection in water at Fred's cave and is suddenly motivated to switch back to human form. Gunn and Wesley are surrounded and tied up by rebels who want to send a message to the castle. Gunn and Wesley try to convince the rebels that they know the princess and suggest they use them to contact her. The rebels agree, but their idea involves decapitation. Fred comforts Angel as he painfully deals with the aftermath of being controlled by the demon inside of him. He concludes that his friends saw what he really was and now he can never go back to them.

The Groosalugg tells Cordelia that his human qualities make him unappealing to his people, so he battled with demons to end his existence, but after defeating them earned the name for bravery and strength. Lorne is brought before Cordelia for judgment and he is almost sentenced to death, but Cordelia pardons him and then kicks him out so she can be alone with her future mate. Cordelia explains to the Groosalugg that she is not a princess, but he doesn't believe her because of what he was told. Silas tells his fellow priests that the princess has requested paper so she can write proclamations and do good for Pylea. He doesn't like the fact that she has not taken part in the com-shuk yet. Cordelia's proclamation writing is interrupted by Silas who brings forth a large platter and orders Groosalugg out of the room. He tells her she and Groosalugg are just tools and she will do what she is told. Cordelia refuses to accept that, until she is shocked into silence as Silas reveals Lorne's head displayed on the platter.

Makeup Artist Dayne Johnson says that this episode was one of the most time-consuming for the makeup department. The full-body green makeup used to transform Andy Hallett into a Pylean took three hours, and the dozens of Pylean extras required 14 makeup artists beginning at 2:30am. [1]

Series creator Joss Whedon briefly appears in this episode playing Lorne's Pylean brother, "Numfar". Whedon wanted his appearance to be a big surprise, and so had his make-up done in another make-up trailer. When Andy Hallett, the actor who played Lorne, saw Whedon doing a "Dance of Joy" at rehearsal, he thought the unknown actor was "trash". [2]

The "Pylea" arc, which begins with the previous episode and concludes with the season finale, "There's No Place Like Plrtz Glrb", appears ninth on Slayage.com's list of the top 10 episodes of Angel. [3] 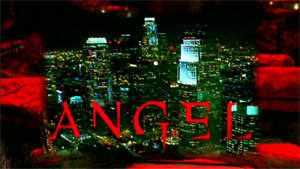 Angel is an American television series, a spin-off from the television series Buffy the Vampire Slayer. The series was created by Buffy's creator, Joss Whedon, in collaboration with David Greenwalt. It aired on The WB from October 5, 1999, to May 19, 2004, consisting of five seasons and 110 episodes. Like Buffy, it was produced by Whedon's production company, Mutant Enemy. 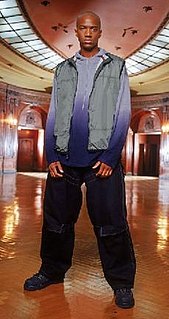 Charles Gunn is a fictional character created by Joss Whedon for the television series, Angel and introduced by writer Gary Campbell in the episode "War Zone". The character is portrayed by J. August Richards, and was named by Whedon after filmmaker James Gunn and actor Sean Gunn, both of whom had worked with Whedon. Gunn is introduced as the leader of a street gang which protects its neighborhood from vampires. 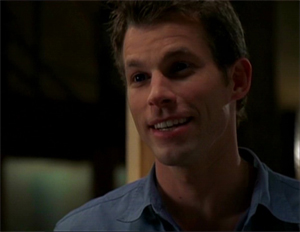 The Groosalugg, nicknamed Groo, is a fictional character on the WB network's series Angel. He appeared in seasons 2 and 3, and is portrayed by Mark Lutz.

"Provider" is episode 12 of season 3 in the television show Angel.

"Belonging" is episode 19 of season two in the television show Angel.

"Over the Rainbow" is episode 20 of season 2 in the television show Angel, originally broadcast on the WB network. This episode begins immediately where the previous ends: Cordelia has been inadvertently sucked into a dimensional portal. She ends up as a slave in an alternate world called Pylea, until her owners learn of her precognitive visions. Back in Los Angeles, Angel, Wesley and the Host attempt to rescue Cordelia, while Gunn discovers he has alienated his old street gang.

"Heartthrob" is the first episode of season three in the television show Angel. Written and directed by David Greenwalt, it was originally broadcast on September 24, 2001 on the WB network. In this episode, Angel's former traveling companion James seeks revenge against Angel for staking his lover, Elisabeth.

"Fredless" is episode 5 of season 3 in the television show Angel. Written by Mere Smith and directed by Marita Grabiak, it was originally broadcast on October 22, 2001 on the WB network. Fred's parents, Roger and Trish Burkle, arrive in town from Texas to take her home with them, prompting Fred to run away. Angel learns that Fred's problems with her mother and father are purely emotional while Mr. and Mrs. Burkle prove themselves to be formidable fighters against demons. Meanwhile, the gang is unknowingly in danger after Angel beheads a vicious demon whose head is the breeding ground for a strain of insect demons, causing a swarm of giant cockroaches to lay siege to the hotel in order to retrieve their offspring. 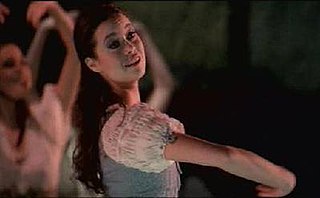 "Waiting in the Wings" is the thirteenth episode of season 3 in the television show Angel. Written and directed by series creator Joss Whedon, it was originally broadcast on February 4, 2002 on the WB network. In "Waiting in the Wings", Angel takes the gang out for an evening at the ballet but becomes suspicious when the prima ballerina is the same one he saw dance more than 100 years ago. When Cordelia and Angel sneak backstage to investigate, they are consumed by overwhelming passion for each other as they are possessed by spirits of unrequited ballet lovers held captive by the sinister ballet troupe leader. Also, Fred finds that both Wesley and Gunn have feelings for her too, but she must eventually choose one of them.

"Couplet" is episode 14 of season 3 in the television show Angel.

"Spin the Bottle" is episode 6 of season 4 in the television show Angel. Written and directed by series creator Joss Whedon, it was originally broadcast on November 10, 2002 on the WB television network. In "Spin the Bottle", Lorne performs a magic spell on Cordelia to help her regain her memory, but instead the spell causes all the Angel Investigations members to revert to their teenage personae.

"Release" is episode 14 of season four in the television show Angel.

"There's No Place Like Plrtz Glrb" is episode 22 of season two of the television show Angel, originally broadcast on the WB network. The episode was written and directed by executive producer David Greenwalt. The narrative of the Season Two finale begins with the group still stranded in Pylea. Lorne has been beheaded by the priests, but is alive as long as his body is intact; he and Cordelia – crowned princess of Pylea due to her precognitive visions – try to escape the castle. Angel struggles to regain his humanity after his experience with his true demon form while Wesley and Gunn lead the human rebels in a revolt against the demon ruling class.

"Slouching Toward Bethlehem" is episode 4 of season 4 in the television show Angel. Its title derives from a line from the W. B. Yeats poem "The Second Coming".

"Peace Out" is episode 21 of season 4 in the television show Angel. 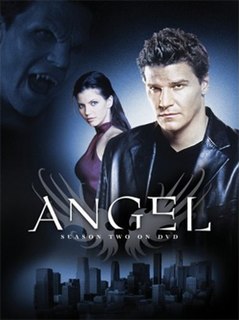 The second season of the television series Angel, the spin-off of Buffy the Vampire Slayer, premiered on September 26, 2000 on The WB and concluded its 22-episode season on May 22, 2001. It maintained its previous timeslot, airing Tuesdays at 9:00 pm ET, following Buffy. 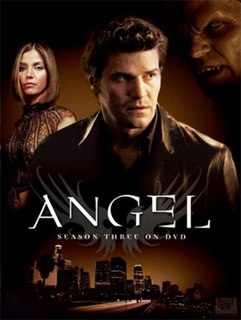 The third season of the television series Angel, the spin-off of Buffy the Vampire Slayer, premiered on September 24, 2001 on The WB and concluded its 22-episode season on May 20, 2002. The season aired in a new timeslot, Mondays at 9:00 pm ET. This was the first season where Angel and Buffy didn't air on the same network, as Buffy had moved to the UPN network beginning with its sixth season.

The fourth season of the television series Angel, the spin-off of Buffy the Vampire Slayer, premiered on October 6, 2002 on The WB and concluded its 22-episode season on May 7, 2003. The season aired in a new timeslot, Sundays at 9:00 pm ET, and then relocated to Wednesdays at 9:00 pm ET, beginning with "Habeas Corpses".