Throwing Muses is the name of:

Vaughan Oliver was a British graphic designer based in Epsom, south of London. Oliver was best known for his work with graphic design studios 23 Envelope and v23. Both studios maintained a close relationship with record label 4AD between 1982 and 1998 and gave distinct visual identities for the 4AD releases by many bands, including Mojave 3, Lush, Cocteau Twins, The Breeders, This Mortal Coil. Pale Saints, Pixies, and Throwing Muses. Oliver also designed record sleeves for such artists as David Sylvian, The Golden Palominos, and Bush.

Jane Scarpantoni is a classically trained American cello player who has played on a number of alternative rock albums.

"Sunburn" is a song by English rock band Muse, released as the fourth single from their 1999 debut album Showbiz. 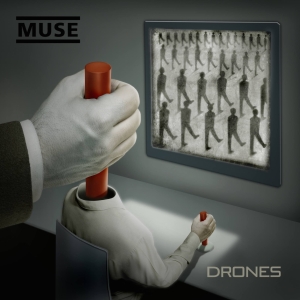 Drones is the seventh studio album by English rock band Muse, released on 5 June 2015 by Helium-3 and Warner Bros. Records. After their previous albums incorporated orchestral and electronic music, Muse aimed to return to a more straightforward rock sound. The album was recorded between October 2014 and April 2015 at the Warehouse Studio in Vancouver, and was produced by the band and Robert John "Mutt" Lange. Drones is a concept album following a soldier's abandonment, indoctrination as a "human drone", and eventual defection. In support of its release, the band embarked on the Drones World Tour from 2015 to 2016. 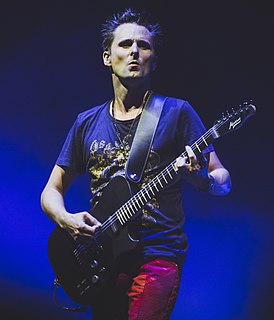 Matthew James Bellamy is an English singer, musician, and songwriter. He is best known as the lead singer, guitarist, pianist, and primary songwriter of the rock band Muse. He is recognised for his eccentric stage persona, wide tenor vocal range, and abilities on the piano and guitar.