Christopher France (born July 8, 1976), better known by his stage name Thrust, is a Canadian rapper from Toronto, Ontario. He is most known for his appearance on the Rascalz' 1998 single "Northern Touch," which also features Kardinal Offishall, Choclair, and Checkmate. He was also featured on the pop band soulDecision's biggest hit "Faded". Thrust has taught an Artist Series at the Harris Institute of Music in Toronto. [1]

Drop the Beat was a Canadian television series produced by Back Alley Film Productions, which aired on CBC Television in 2000 and 2001. A short-run dramatic series, the show was one of the first television series in the world centred around hip hop music and culture.

Kevin Brereton, better known by his stage name k-os, is a Canadian alternative rapper, singer, songwriter and producer. His given name may also be cited as Kheaven, a spelling he later adopted.

The Canadian hip hop scene was established in the 1980s. Through a variety of factors, it developed much slower than Canada's popular rock music scene, and apart from a short-lived burst of mainstream popularity from 1989 to 1991, it remained largely an underground phenomenon until the early 2000s.

"Northern Touch" is a Canadian hip hop single, which was released in 1998 by Rascalz in collaboration with Checkmate, Kardinal Offishall, Thrust and Choclair. It is one of the most important individual songs in the history of Canadian hip hop, which almost singlehandedly transformed the genre from a largely ignored underground movement into a viable commercial endeavour.

Rashia Tashan Fisher, known professionally as Rah Digga, is an American rapper and actress. She is best known as a longtime member of the Flipmode Squad, a hip hop group led by Busta Rhymes. Her debut album, Dirty Harriet (2000), peaked in the top-20 of the Billboard 200, and she released her second album, Classic, in 2010. She starred in the horror film Thirteen Ghosts (2001) as Maggie.

Jason Drew Harrow, better known by his stage name Kardinal Offishall, is a Canadian rapper, record producer, DJ, and record executive. Often credited as Canada's "hip hop ambassador", he is regarded as one of the country's best hip hop producers, and is best known for his distinctive reggae and dancehall-influenced style of hip hop.

Kareem Blake, better known by his stage name Choclair, is a Canadian rapper. He was one of the most successful Canadian rappers in Canada in the late 1990s and early 2000s. Choclair has been nominated for six Juno Awards, winning four.

Serbian hip hop refers to all genres of hip hop music in the Serbian language. The term is also sometimes used to refer to any hip hop music made by Serbs, including instrumental hip hop, as well as rap songs by members of the Serbian diaspora, often in languages other than Serbian. Some of most prominent hip hop groups include VIP, Sunshine, p.pop Beogradski Sindikat, Bad Copy. Popular solo artists include Juice, Gru, Struka, Ajs Nigrutin, Marčelo, Zli Toni, Fox, Surreal, Furio Djunta, Demonio.

Rascalz are a Canadian hip-hop group from Vancouver, British Columbia. The group played a crucial role in the artistic and commercial development of Canadian hip hop as well as specifically for the Westcoast scene in Vancouver popularizing the term “Van City”. The group consists of emcees Red1 and Misfit, and record producer DJ Kemo. Breakdancers Zebroc and Dedos were also part of the group. 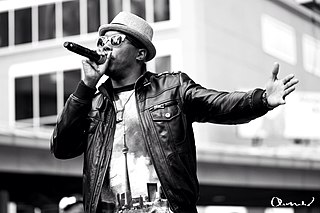 Sheldon Pitt, better known by his stage name Solitair, is a Canadian rapper and record producer from Toronto, Ontario. He is a founding member of the now defunct Black Jays record label and production team. Solitair has been producing hip hop and R&B for nearly 20 years, and has produced for Nina Sky, Glenn Lewis, Cham, Maestro, Rascalz, Kardinal Offishall, Ivana Santilli, Jully Black, Choclair, and Sugar Jones among others. 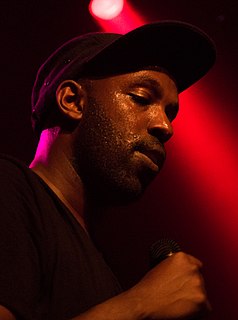 Shadrach Kabango, better known as Shad or Shad K, is a Rwandan-Canadian rapper and broadcaster. He has released 7 full-length studio albums and 3 EP's since his debut in 2005. He won a Juno Award for Rap Recording of the Year in 2011 and 5 of his albums have been shortlisted for the Polaris Music Prize, the most short-list nominations of any artist since the prize's creation in 2006. Shad hosted Q on CBC Radio One and hosts the International Emmy and Peabody Award-winning documentary series Hip-Hop Evolution on HBO Canada and Netflix.

Roger Perryman, better known as Mr. Attic, is a Canadian hip-hop producer from Toronto, Ontario. He is a member of Juno Award-winning production team, Da Grassroots.

Daniel Faraldo, known professionally as Dan-e-o, is a Canadian hip hop artist and actor of Jamaican and Spanish descent. In June 2015, Dan-e-o received the award for Best Hip Hop Artist at the Black Canadian Awards. He is a member of the groups Monolith and Perfeck Strangers, both based in Scarborough, Ontario.

Checkmate is a Canadian male rapper from Vancouver, best known as one of the collaborating artists on Rascalz' influential 1998 single "Northern Touch". He was also a Juno Award nominee for Rap Recording of the Year for his single "R.A.W." at the Juno Awards of 2003.

Quinton Armani Gardner, professionally known as Pressa, is a rapper and singer from Toronto.

Jaiden Anthony Watson, better known by his stage name NorthSideBenji, is a Canadian rapper and musician from Brampton, Ontario. Benji gained recognition from his Certified Gold single "Levels", which featured Toronto rapper Houdini. The single was released in December 2018, and was the only supporting single of his debut extended play, Caviar Dreams, which was released on January 18, 2019. He released his second EP Frienemy on September 6, 2019.