Thruxton Karting Circuit is a kart racing circuit situated at Thruxton Circuit in Hampshire. At 1,100 metres long, the full circuit has a variety of fast, slow and technical corners.[ citation needed ]

Thruxton Motorsport Centre is a motor-racing circuit located near the village of Thruxton in Hampshire, England which hosts motorsport events including British Touring Cars and Formula 3 racing. It is often referred to as the "Fastest Circuit in the UK" where drivers can reach speeds of over 300kph and has earnt the reputation of being a true driver's track. To illustrate this, Damon Hill drove his Williams Formula One car around the circuit at an average speed of 147mph in 1993. 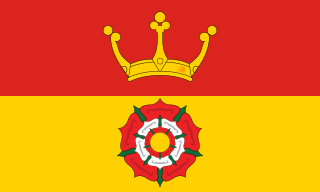 The centre has a hospitality building and often hosts the British Schools Karting Championship and various endurance races and championships.

The British Schools Karting Championship was set up in late 2003 as a means to promote karting to teenage school children in the United Kingdom. The main principle of the championship is to enable as many young people as possible to enjoy karting without having to spend thousands of pounds buying and maintaining karts. The championship achieves this by providing all the karts for the young drivers to race on in what is known as 'arrive-and-drive' kart racing. This reduces the cost of competing in a sport that otherwise expensive and inaccessible. In this sense the championship differs significantly from the National Schools Karting Association (NatSKA) because schools competing in NatSKA are required to purchase and maintain their karts in order to race them.

There are a total of five track layouts:

There are 3 different types of Karts:

13hp Thunderkarts for drivers of 15+

Kart racing or karting is a variant of motorsport road racing with open-wheel, four-wheeled vehicles known as go-karts or shifter karts. They are usually raced on scaled-down circuits, although some professional kart racing are also raced in full-size motorsport circuits. Karting is commonly perceived as the stepping stone to the higher ranks of motorsports, with former Formula One champions such as Sebastian Vettel, Nico Rosberg, Ayrton Senna, Lewis Hamilton, Michael Schumacher and Fernando Alonso having begun their careers in karting. 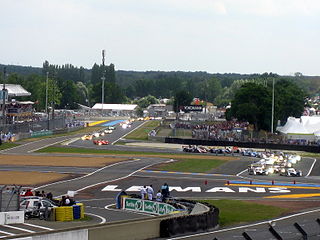 OK-Junior is a kart racing class for top drivers aged 11 to 15.

Superkart is a form of motorsport road racing in which the class is a racing vehicle sized like a kart but with several characteristics more strongly associated with open-wheel racing cars. 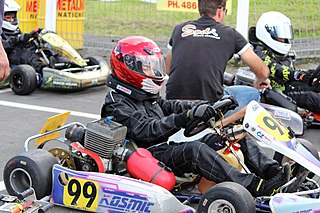 A go-kart, also written as go-cart, is a type of open-wheel car. Go-karts come in all shapes and forms, from motorless models to high-powered racing machines. Some, such as Superkarts, are able to beat racing cars or motorcycles on long circuits. 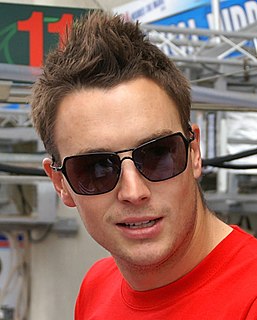 Leo Mansell is a British racing driver. He is the son of 1992 Formula One world champion, Nigel Mansell, and elder brother of fellow racing driver Greg Mansell. 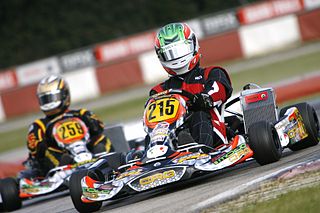 The Rotax Max Challenge (RMC) is a kart racing series owned and organized worldwide by BRP-Powertrain and its distributors, approved and in compliance with CIK-FIA. Competition takes place on a club, national and international level which culminates in the Grand Finals once a year.

Mona Anette Lindgren Jansson, known as Nettan Lindgren Jansson is a Swedish auto racing driver. She is the first and only female driver to win a race in the British Touring Car Championship, when she won her class with a BMW M3 at Thruxton. She is currently racing in Trofeo Abarth 500 Scandinavia and works as a racing manager for her daughter, Caroline.

Riki James Christodoulou is a British racing driver and is the cousin of Adam Christodoulou, the winner of the 2008 Formula Renault UK Championship.

Harry Tincknell is a British racing driver who currently races for Ford Chip Ganassi Racing Team UK in the FIA WEC which includes the Le Mans 24 Hours. He won the LM P2 class on his Le Mans 24 Hour race debut in 2014 and the 2016 European Le Mans Series title having switched from a successful single seater career at the end of the 2013 season.

Jorge Cevallos is a Mexican racing driver from Tijuana, Baja California who resides in San Diego, California. He is a part of the Escuderia Telmex program which is responsible for F1 drivers Sergio Pérez, and Esteban Gutiérrez.

KF1 is the top level of karting. It is open to the best drivers aged 15 and up.

Mike Bushell is a British racing driver. In 2013, Bushell competed in the British Touring Car Championship for the first time, driving for IP Tech Race Engineering in their Chevrolet Cruze NGTC car at Knockhill in place of Andy Neate. He returned to the series in 2015 with AmD Tuning, after winning the Renault Clio Cup United Kingdom in 2014.

Jordan Cane is a British racing driver from West Sussex, England. Making his racing debut in the United States this year, Jordan is the youngest active Formula Car racer and the youngest to score a point in the F1600 Championship Series.