Thue may refer to:

Axel Thue, was a Norwegian mathematician, known for highly original work in diophantine approximation, and combinatorics.

Thue is an esoteric programming language invented by John Colagioia in early 2000. It is a meta-language that can be used to define or recognize Type-0 languages from the Chomsky hierarchy. Because it is able to define languages of such complexity, it is also Turing-complete itself. Thue is based on a nondeterministic string rewriting system called semi-Thue grammar, which itself is named after the Norwegian mathematician Axel Thue. The author describes it as follows: "Thue represents one of the simplest possible ways to construe constraint-based programming. It is to the constraint-based paradigm what languages like OISC are to the imperative paradigm; in other words, it's a tar pit."

Thue is a delicacy in Tibetan cuisine made with dri cheese, brown sugar and unsalted sweet cream butter. These ingredients are mixed together by hand into a smooth, slightly crumbly doughy mixture. It has a high butter content and is shaped in a thuedrom, a rectangular wooden frame about the size of a small brick. Thue is often topped with representations of the moon and the sun, carved out of butter while it is in a cold state. It is one of the few sweet Tibetan dishes and is eaten as a dessert on Losar and other special occasions like the Sho Dun Festival or on weddings.

Petoro is a company that is wholly owned by the Government of Norway. Established in 2001, it manages the Government's portfolio—collectively called State's Direct Financial Interest (SDFI)—of exploration and production licenses for petroleum and natural gas on the Norwegian continental shelf. The company also has a control function surveying Equinor's production on behalf of the Government. Petoro is not an operator of any fields and does not directly own the licenses.

Christian Krohg was a Norwegian naturalist painter, illustrator, author and journalist. Krohg was inspired by the realism art movement and often chose motives from everyday life. He was the director and served as the first professor at the Norwegian Academy of Arts from 1909 to 1925.

The Sins of Thy Beloved was a death-doom/gothic metal band from Bryne, Norway, founded in 1996.

In combinatorics, a square-free word is a word that does not contain any subword twice in a row.

In the mathematical area of graph theory, the Thue number of a graph is a variation of the chromatic index, defined by Alon et al. (2002) and named after mathematician Axel Thue, who studied the squarefree words used to define this number.

Thuès-Entre-Valls is a commune in the Pyrénées-Orientales department in southern France.

The 2002–03 Syracuse Orangemen basketball team represented Syracuse University in NCAA men's basketball competition in the 2002–03 Division I season. The head coach was Jim Boeheim, serving for his 27th year. The team played its home games at the Carrier Dome in Syracuse, New York. The team finished with a 30–5 (13–3) record, while capturing its first modern-era NCAA Championship.

The 2001–02 Syracuse Orangemen basketball team represented Syracuse University in NCAA men's basketball competition in the 2001–02 Division I season. The head coach was Jim Boeheim, serving for his 26th year. The team played its home games at the Carrier Dome in Syracuse, New York. The team finished with a 23–13 (9–7) record, while making it to the Final Four round of the NIT tournament. The team was led by senior Preston Shumpert and juniors Kueth Duany and DeShaun Williams. Seniors Billy Celuck, sophomores Jeremy McNeil and James Thues and freshmen Craig Forth and Josh Pace and Hakim Warrick were also major contributors.

Thue et Mue is a commune in the department of Calvados, northwestern France. The municipality was established on 1 January 2017 by merger of the former communes of Bretteville-l'Orgueilleuse, Brouay, Cheux, Le Mesnil-Patry, Putot-en-Bessin and Sainte-Croix-Grand-Tonne. 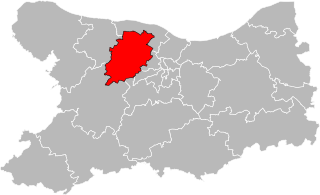 The canton of Bretteville-l'Orgueilleuse is an administrative division of the Calvados department, northwestern France. It was created at the French canton reorganisation which came into effect in March 2015. Its seat is in Thue et Mue.