The Marshall Thundering Herd is the intercollegiate athletic collection of teams that collectively represent the Marshall University in Huntington, West Virginia. Thundering Herd athletic teams compete in Conference USA, which are members of the NCAA Division I.

Other teams using the "Thundering Herd" name include:

A.H. Parker High School is a four-year public high school in Birmingham, Alabama. It is one of seven high schools in the Birmingham City School System and is named for longtime Birmingham educator Arthur Harold Parker. School colors are purple and white, and the mascot is the Bison. Parker competes in AHSAA Class 6A athletics.

Carlisle High School is a public high school located in Carlisle, Pennsylvania in the United States, and includes grades 9–12. In 2010 the school reported having 1,493 pupils enrolled with 346 pupils eligible for a federal free or reduced price lunch. The school employed 110 teachers yielding a student teacher ratio of 13.50:1. According to a report by the Pennsylvania Department of Education, 14 teachers were rated "Non‐Highly Qualified" under No Child Left Behind.

Merrill, previously Merrill Lynch, is an American investing and wealth management division under the auspices of Bank of America. Along with BofA Securities, the investment banking arm, both firms engage in prime brokerage and security dealings. The firm is headquartered in New York City, and occupies the entire 34 stories of 250 Vesey Street, part of the Brookfield Place complex, in Manhattan. Merrill employs over 15,000 financial advisors and manages $2.2 trillion in client assets. 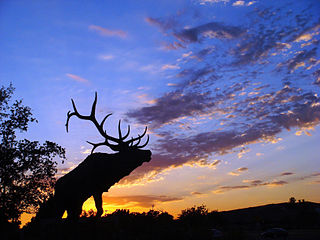 Elk Grove is a city in Sacramento County, California, located just south of the state capital of Sacramento. It is part of the Sacramento–Arden-Arcade–Roseville Metropolitan Statistical Area. As of 2018, the population of the city was estimated at 173,702. The second-largest city in Sacramento County, Elk Grove was the fastest growing city in the U.S. between July 1, 2004, and July 1, 2005. The City of Elk Grove incorporated on July 1, 2000. It is a general law city with a council/manager form of government. One of Elk Grove's most significant aspects is the Elk Grove Unified School District, which is the city's largest employer.

James William Cartwright is an American retired NBA basketball player and a former head coach with the Chicago Bulls. A 7'1" center, he played 16 seasons for the New York Knicks, Chicago Bulls and Seattle SuperSonics, helping the Bulls capture consecutive championships in 1991, 1992 and 1993. He attended Elk Grove High School in Elk Grove, California, and played college basketball at the University of San Francisco.

Woodbury Junior-Senior High School (WHS) is a comprehensive community middle school and public high school that serves students in sixth through twelfth grades from Woodbury, in Gloucester County, New Jersey, United States, as part of the Woodbury Public Schools system. The class of 2003 was the school's 100th graduating class, making Woodbury High School one of the oldest secondary schools in South Jersey and the oldest in its athletic conference.

Marshall University: Ashes to Glory is a 2000 documentary film about the November 14, 1970 Marshall University plane crash that killed 75 people, and the efforts of new head coach Jack Lengyel and the coaching staff, to rebuild the team and help heal the city of Huntington, West Virginia.

Jack Cunningham was an American screenwriter. He wrote for 132 films between 1913 and 1939. He was born in Ionia, Iowa, and died from a cerebral hemorrhage in Santa Monica, California.

Zack Valentine is a former professional American football player who played linebacker for four seasons for the Pittsburgh Steelers and Philadelphia Eagles. As a rookie, he won a Super Bowl ring with the Steelers in Super Bowl XIV over the Los Angeles Rams. Valentine played his prep years at John A. Holmes High School in Edenton.

The 1997 Marshall Thundering Herd football team represented the Marshall University in the 1997 NCAA Division I-A football season. It was the program's first year in the Mid-American Conference (MAC). They were led by second-year head coach Bob Pruett.

Marco the Bison is the official costumed mascot of Marshall University in Huntington, West Virginia. He is an American Bison dressed in the home uniform of the school. Marco's name developed from a mix of the university's name at the time, Marshall College. Marshall became a University in 1961, but the name for Marco stuck.

The 2016 Marshall Thundering Herd football team represented Marshall University in the 2016 NCAA Division I FBS football season. The Thundering Herd played their home games at the Joan C. Edwards Stadium in Huntington, West Virginia, and competed in the East Division of Conference USA (C–USA). They were led by seventh-year head coach Doc Holliday. They finished the season 3–9, 2–6 in C-USA play to finish in a tie for sixth place in the East Division.

The 1895 Marshall Thundering Herd football team represented Marshall University in the 1895 college football season. In its inaugural season, the team did not have a coach, and were outscored by their opponents 0–36 in two games.