Tiago Fernandes (born January 29, 1993) is a former Brazilian tennis player. He achieved the No. 1 ranking on the ITF Junior Circuit. [1] Fernandes was coached by Larri Passos, the former coach of Brazilian former world #1 and three-time French Open winner Gustavo Kuerten.

Fernandes won the Boys' Singles division of the 2010 Australian Open, defeating Sean Berman of Australia in the final, 7–5, 6–3. [2]

At the Junior Australian Open, he became the first Brazilian to win a Junior Grand Slam, defeating Sean Berman 7–5, 6–3 in the final. During the tournament he played against many other higher seeded players like Gianni Mina, in the semifinals where he won 4–6, 7–6, 6–2.

Fernandes was fifth seed at the Junior French Open, reaching the quarterfinals where he lost to eventual champion, Agustín Velotti, 7–6(0), 6–1.

As the No. 3 seed at the Junior Wimbledon Championships, Fernandes defeated local wildcard Tom Farquharson in the first round and American qualifier Dane Webb in the second round. He lost to eventual finalist, Australian qualifier Benjamin Mitchell in the third round, 5–7, 4–6.

Fernandes represented Brazil at the 2010 Summer Youth Olympics in the tennis competition. He defeated Peter Heller 6–1, 5–7, 6–4 in the first round and Jozef Kovalik 7–6(3), 6–1 in the second round to advance to the quarterfinals, where he lost to Victor Baluda, 2–6, 6–7(5). He and his doubles partner Renzo Olivo defeated Heller and his partner Kevin Krawietz, 6–3, 7–5 to advance to the doubles quarterfinals, where they lost to Diego Galeano and Ricardo Rodriguez.

Fernandes entered the Junior US Open as the No. 3 seed, defeating American wildcard Mitchell Kreuger in the first round 6–0, 6–1, and Mate Pavić in the second round, 6–3, 7–6(5), leading to a rematch with Victor Baluda. After dropping the first set 4–6, Fernandes took the second 6–4, but lost the final set 3–6. He reached the semifinals in the Junior US Open doubles competition with his compatriot Guilherme Clézar, defeating the top seeds, Márton Fucsovics and Mate Zsiga in the second round.

After winning his junior Australian Open title, Fernandes elected to play senior tournaments. He lost in the first round of qualifying at the Prime Cup Aberto de São Paulo challenger and the Brasil Open in Costa do Sauípe and U.S. Men's Clay Court Championships in Houston, ATP 250 events.

To prepare for the junior Wimbledon Championships, Fernandes played at the UNICEF Open, losing in the first round of qualifying to Aisam-ul-Haq Qureshi, 1–6, 5–7.

Fernandes entered qualifying for the Beijing International Challenger, defeating Jia Li and Hsin-Han Lee to reach the main draw, where he won his first challenger match, defeating Kaden Hensel. Despite losing 4–6, 4–6 to Andrey Kumantsov in the round of 16, Tiago earned 13 points toward his ATP ranking, moving him up 117 spots to a career high ranking of 645.

He received a wild card to play the Samarkand Challenger, drawing top seed Blaž Kavčič in the first round.

Fernandes plays most of his ITF Futures events in his home country of Brazil. He matched his best ever Futures result at the Brazil F28, reaching the semifinals and losing a tight match against the top seed Andre Miele, 7–6(5), 5–7, 5–7.

He received a wild card in to the main draw in the 2010 Copa Petrobras São Paulo challenger, coming back from a set and a break deficit to defeat fellow Brazilian Augusto Meirelles to win 3–6, 7–5, 6–0, saving three match points. [3] He lost to Nicolas Devilder in the following round.

As the winner of the junior slam the previous year, Fernandes received a wild card into the 2011 Australian Open qualifying draw, suffering a leg injury in his 2–6, 0–6 loss to Evgeny Korolev. After a nearly two-month recovery period that caused him to miss out on the 2011 Brasil Open, he qualified for the main draw at both the 2011 All Japan Indoor Tennis Championships and the 2011 ATP Challenger Guangzhou challengers, reaching the round of 16 at both, which gave him a career high ranking of 509.

Fernandes received a wild card into the main draw at the 2011 Pernambuco Brasil Open Series, and faced lucky loser Tiago Lopes, defeating him 6–4, 4–6, 6–2. He played another up-and-coming Brazilian teenager, Bruno Sant'anna, in the second round, saving set points in the first set. He faced another Brazilian teenager, his friend Guilherme Clezar, in the quarterfinals, winning 6–4, 3–6, 7–6(3), breaking Clezar as he served for the match to force the final set tiebreak. His biggest victory came against the fourth seed, Júlio Silva. Dropping the first set 2–6, Fernandes fought back following a rain delay and relocation to indoor facilities to win the next two sets, and the match, 2–6, 7–5, 7–6(2), taking him to a career high of 380 in the world. Citing fatigue and back pain, he withdrew from the final against Tatsuma Ito, and will instead prepare for his next tournament, the 2011 Aberto Santa Catarina De Tenis.

In August, Fernandes announced his retirement to focus on his college work. [4]

Ivan Ljubičić is a retired Croatian professional tennis player. He reached a career-high Association of Tennis Professionals (ATP) world No. 3 singles ranking on 1 May 2006. His career highlights include reaching a Grand Slam semifinal at the 2006 French Open, and an ATP World Tour Masters 1000 title at the Indian Wells Masters in 2010 as well as 3 other finals, 2 of them coming in 2005 at Madrid and Paris, and the other at the Miami Masters in 2006. 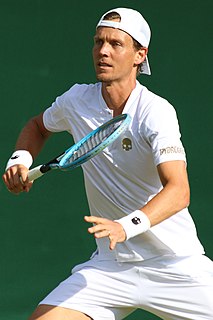 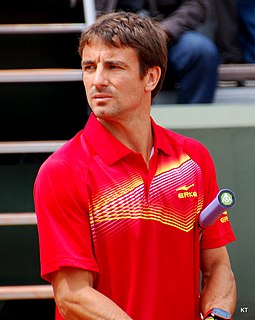 Tommy Robredo Garcés is a Spanish professional tennis player. His career-high singles ranking is world No. 5, which he reached in August 2006 as a result of winning the Hamburg Masters earlier in the year. 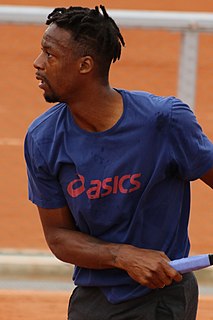 Gaël Sébastien Monfils is a French professional tennis player. He reached a career-high ATP world No. 6 singles ranking on 7 November 2016. His career highlights include reaching two Grand Slam singles semifinals at the 2008 French Open and 2016 US Open and three ATP Tour Masters 1000 singles finals – two at the Paris Masters and the other at the Monte Carlo Masters (2016). 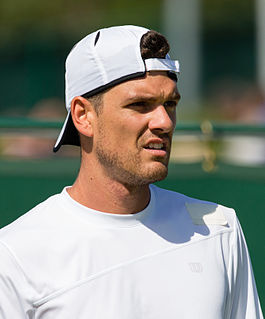 Frank Russell Dancevic is a Canadian professional tennis player. He first became the country's top singles player, according to ATP rankings, on February 10, 2003, as an 18-year-old, and remained so from January 30, 2006 until June 20, 2010. Dancevic has reached two ATP singles finals, the quarterfinals of the 2007 Montreal Masters and achieved a career-high singles ranking of world No. 65 in September 2007. 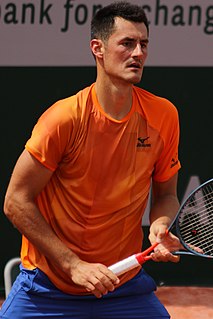 Bernard Tomic is an Australian professional tennis player whose career-high ranking was world No. 17. As a junior, Tomic enjoyed a successful career in which he won a Orange Bowl title and two junior Grand Slam singles titles, the 2008 Australian Open and 2009 US Open. He won the 2013 Apia International Sydney, 2014 Claro Open Colombia, 2015 Claro Open Colombia and the 2018 Chengdu Open. He made a final appearance at the 2016 Acapulco Telcel and a quarterfinal appearance at the 2011 Wimbledon Championships, as well as at the 2015 BNP Paribas Open, the 2015 Shanghai Masters and the 2016 Western & Southern Open.

Janko Tipsarević is a Serbian retired tennis player. His career-high singles ranking is world No. 8, achieved on 2 April 2012. In his career, he has won four ATP World Tour titles, one ATP doubles title, three Futures, and 15 Challenger titles. Tipsarević also won the 2001 Australian Open junior title. He has achieved two victories over a world No. 1 player, having defeated compatriot Novak Djokovic twice. He also has 13 victories against other players in the top 10: four wins against Tomáš Berdych, and one each against Fernando González, Mikhail Youzhny, David Ferrer, James Blake, Gaël Monfils, Andy Murray and Juan Mónaco. He holds victories over former world No. 1 players Carlos Moyá, Marat Safin, Lleyton Hewitt, Juan Carlos Ferrero and Andy Roddick. His best results at a Grand Slam tournament have been reaching the quarterfinals at the US Open in 2011 and 2012. 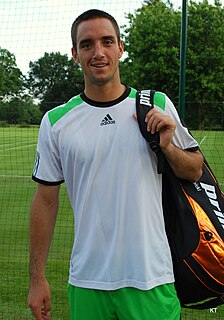 Viktor Troicki is a Serbian professional tennis player. He won his first ATP singles title at the 2010 Kremlin Cup, and his second and third ATP singles titles at the 2015 and 2016 Apia International Sydney. His biggest achievement was career-high singles ranking of world No. 12 in June 2011, along with winning the deciding rubber in Serbia's Davis Cup final against France in 2010. Since then, every Davis Cup he's attended, he has contributed to Serbia resulting in a quarterfinal or better. He is known for his strong serve, which he can hit at up to 240 km/h (149 mph), and for serving a 12-month doping ban in 2013–14 for missing a drug test. 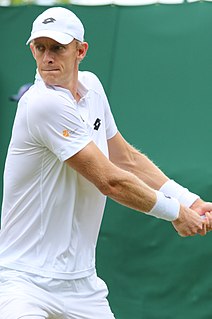 Kevin Anderson is a South African professional tennis player who is ranked world No. 91 in men's singles by the Association of Tennis Professionals (ATP) as of 04 November 2019. 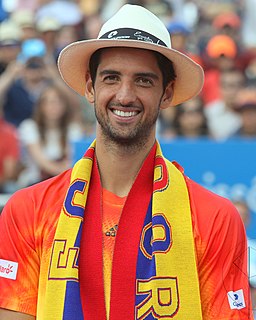 Thomaz Cocchiarali Bellucci is a Brazilian professional tennis player. He achieved a career-high singles ranking of World No. 21 in July 2010. 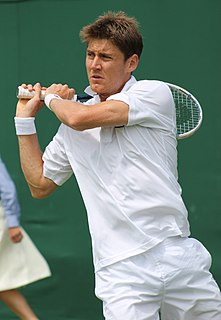 Matthew Ebden is a South African-born Australian professional tennis player. Highlights of Ebden's career thus far include winning the bronze medal at the 2010 Commonwealth Games, a quarterfinal appearance at the 2011 Shanghai Rolex Masters and winning the 2013 Australian Open mixed doubles title with Jarmila Gajdošová. Ebden has yet to win an ATP singles title but has won four ATP doubles titles. 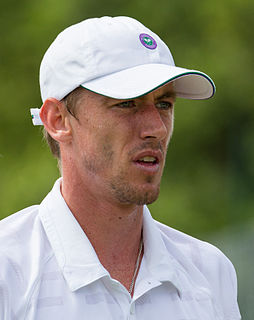 John H. Millman is an Australian professional tennis player. He reached a career-high singles ranking of world No. 33 in October 2018.

Tatsuma Ito is a Japanese professional tennis player. He has won 6 Challenger tournaments and achieved a career-high singles ranking of World No. 60 in October 2012. Ito reached the quarterfinals of 's-Hertogenbosch and Moscow in 2012 and Newport and Bogota in 2015.

Benjamin "Ben" Mitchell is an Australian professional tennis player who as of 2 March 2015 is ranked World No. 204 by the Association of Tennis Professionals (ATP). As a junior, Mitchell enjoyed a successful career in which he reached one junior grand slam singles final at the 2010 Wimbledon Championships and reached a ranking of World No. 20. In January 2012, he competed in his first ATP main draw event at the Brisbane International.

James Duckworth is an Australian professional tennis player currently ranked world No. 71 by the Association of Tennis Professionals (ATP). As a junior, Duckworth enjoyed a successful career which included winning three titles and reaching the semifinals of the 2010 French Open. In January 2012, he competed in his first ATP main-draw event at the Brisbane International. 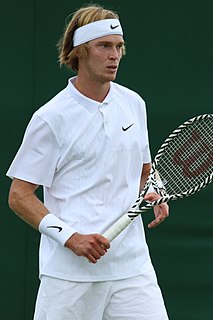 Andrey Andreyevich Rublev is a Russian professional tennis player. He, as of March 2020, reached a career-high singles ranking of No. 14. He has achieved victories over top players including Roger Federer, Dominic Thiem, Stan Wawrinka, David Ferrer, Stefanos Tsitsipas, Grigor Dimitrov, Jo-Wilfried Tsonga, and David Goffin. He won the doubles title at the 2015 Kremlin Cup in Moscow with Dmitry Tursunov, and four singles titles, at the 2017 Croatia Open in Umag, the 2019 Kremlin Cup, which he won on his 22nd birthday, the 2020 Qatar Open, and the 2020 Adelaide International. 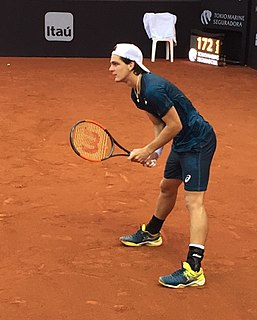