Tianchi (天池) may refer to several locations in China:

Heaven Lake primarily refers to the crater lake of Mount Baekdu, on the Sino–North Korean border 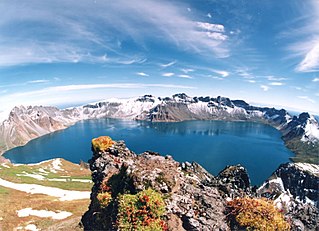 Heaven Lake is a crater lake on the border between China and North Korea. It lies within a caldera atop the volcanic Paektu Mountain, a part of the Baekdudaegan mountain range and the Changbai mountain range. It is located partly in Ryanggang Province, North Korea, at 42.006°N 128.057°E, and partly in Jilin Province, northeastern China.

Heaven Lake is the translation of a Chinese, Mongolian, Manju, Korean, etc. name of a lake; here "Heaven" may refer to Tian or Tengri here:

Arxan is a county-level city in the Hinggan League of northeastern Inner Mongolia in the People's Republic of China.

Inner Mongolia or Nei Mongol, officially the Inner Mongolia Autonomous Region or Nei Mongol Autonomous Region (NMAR), is one of the autonomous regions of the People's Republic of China, located in the north of the country. Its border includes most of the length of China's border with Mongolia. The rest of the Sino–Mongolian border coincides with part of the international border of the Xinjiang autonomous region and the entirety of the international border of Gansu province and a small section of China's border with Russia. Its capital is Hohhot; other major cities include Baotou, Chifeng, and Ordos.

Mianchi County falls under the jurisdiction of the prefecture-level city of Sanmenxia, in the northwest of Henan province, bordering Shanxi province to the north and northwest.

Huaying is a county-level city in the east of Sichuan province, China. It is administered by the prefecture-level city Guang'an. Its total population as of 2016 is 360,000 and with 50000 in the central city district. The city tree is the small leafed banyan and the city flower is the azalea.

Lezhi County is a county of Sichuan Province, China. It is under the administration of Ziyang city.

Lake Tianchi Monster is the name given to what is said to be a lake monster that lives in Heaven Lake located in the peak of Baekdu Mountain within the Baekdudaegan and Changbai mountain ranges encompassing Jilin Province of China and Ryanggang Province of North Korea. According to Beijing Youth Daily, an estimated 20 monsters were reported, however "scientists are skeptical that any large creature would be able to survive in the lake given its recent history of volcanic activity", and skeptics say "it's all in the imagination, or just a floating volcanic rock".

Longmen may refer to the following:

Sanhe (三河市) is a county-level city of Hebei, People's Republic of China.

Tianchi is an alpine lake in Xinjiang, Northwest China, situated at 43°53′9.7″N 88°7′56.6″E. The name (天池) literally means Heavenly Lake and can refer to several lakes in mainland China and Taiwan. This Tianchi lies on the north side of the Bogda Shan range of the Tian Shan, about 30 kilometres (19 mi) south of Fukang and 45 kilometres (28 mi) east of Ürümqi. It is an alpine drift lake shaped in the Quaternary Glacier period. 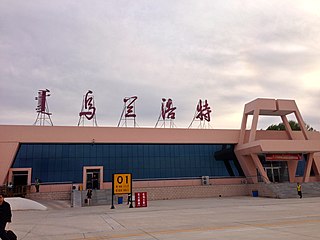 Ulanhot, formerly known as Wangin Süm, alternatively Wang-un Süme, Ulayanqota in Classical Mongolian, and Wangyehmiao or Wangyemiao in Chinese prior to 1947, is a county-level city and the administrative center of Hinggan League in the East of Inner Mongolia autonomous region. Between the years 1947 and 1950, Ulanhot was the capital of Inner Mongolia Region. In 1950, the capital moved to Zhangjiakou and then again in 1952 it moved to Hohhot, which remains the capital to this day.

Xuyong County is a county in the southeast of Sichuan Province, China, bordering the provinces of Guizhou to the south and Yunnan to the west. It is under the administration of the prefecture-level city of Luzhou. The county covers 2,977 km2 (1,149 sq mi) with a population of 688,200 in 2007.

Xikou (disambiguation) may refer to several towns in China:

Arxan Yi'ershi Airport is an airport serving the city of Arxan (A'ershan) in the Hinggan League of Inner Mongolia Autonomous Region, China. It is located near the town of Yi'ershi, 16.5 kilometers north of the city center. Construction started in September 2008 with a total investment of 303 million yuan, and the airport was opened on 28 August 2011.

Rose Peak may refer to: