Tibial vein may refer to:

Tarsal tunnel syndrome (TTS), also known as posterior tibial neuralgia, is a compression neuropathy and painful foot condition in which the tibial nerve is compressed as it travels through the tarsal tunnel. This tunnel is found along the inner leg behind the medial malleolus. The posterior tibial artery, tibial nerve, and tendons of the tibialis posterior, flexor digitorum longus, and flexor hallucis longus muscles travel in a bundle through the tarsal tunnel. Inside the tunnel, the nerve splits into three segments. One nerve (calcaneal) continues to the heel, the other two continue on to the bottom of the foot. The tarsal tunnel is delineated by bone on the inside and the flexor retinaculum on the outside.

Posterior tibial may refer to: 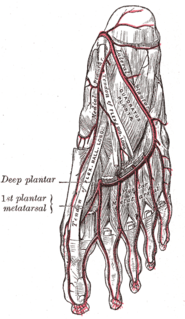 The four plantar metatarsal veins run backward in the metatarsal spaces, communicate, by means of perforating veins, with the veins on the dorsum of the foot, and unite to form the plantar venous arch which lies alongside the plantar arterial arch. 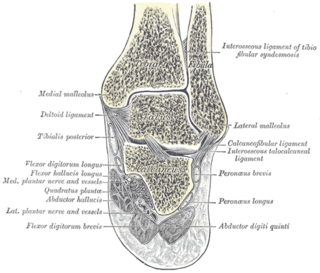 Bancroft's sign, also known as Moses' sign, is a clinical sign found in patients with deep vein thrombosis of the lower leg involving the posterior tibial veins. The sign is positive if pain is elicited when the calf muscle is compressed forwards against the tibia, but not when the calf muscle is compressed from side to side. Like other clinical signs for deep vein thrombosis, such as Homans sign and Lowenberg's sign, this sign is neither sensitive nor specific for the presence of thrombosis.