Tice Farms was a farm and roadside stand located in Woodcliff Lake, New Jersey. Founded in 1808, it was a local landmark which attracted families from miles around, especially in the fall, when it was noted for pumpkins, apple cider, fresh hot donuts and other fall products. With its across-the-street rival, Van Ripers Farm, intense traffic problems developed on fall weekends. It was the original home of The Greenhouse of Fear, a NJ haunted attraction which ran during Halloween season at that location in the mid-1990s. 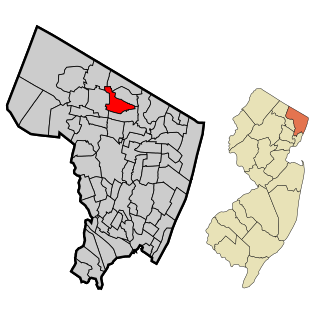 Beginning in the 1970s, the farm was increasingly squeezed by local land development, and Richard Tice, the head of the family, repeatedly sold land to accommodate construction. [1]

The site of the farm buildings, on Chestnut Ridge Road, is now occupied by the Tice's Corner mall. [2]

Baldwin is a town in Chemung County, New York, United States. The population was 832 at the 2010 census. The town name is derived from Thomas and Waterman Baldwin, two of the earliest settlers of the area. The town is east of Elmira. It is part of the Elmira Metropolitan Statistical Area. 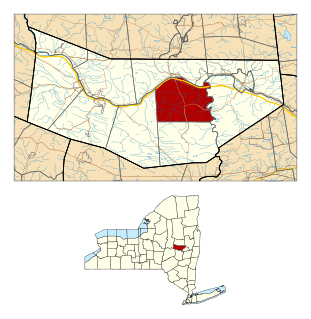 Glen is a town in Montgomery County, New York, United States. The population was 2,507 at the 2010 census. The town was named after Jacob Glen, an early landowner.

Balmville is a hamlet in Orange County, New York, United States. It is part of the Poughkeepsie–Newburgh–Middletown, NY Metropolitan Statistical Area as well as the larger New York–Newark–Bridgeport, NY-NJ-CT-PA Combined Statistical Area. It is located in the southeastern part of the Town of Newburgh. The population was 3,178 at the 2010 census. Many wealthy, influential, and upper income families live in Balmville on roads such as River Road, Sloane Road, Commonwealth Avenue, Susan Drive, and Grand Avenue. Susan Drive is accredited for housing the former Delano Family Estate (Algonac). The Delano family was the family of the mother of Franklin D. Roosevelt, and she in fact was born and raised at Algonac. Many homes in Balmville are incredibly expensive due to their pristine views of the Hudson River. Balmville is also the site of the Powelton Club Country Club. It currently ranks as the highest income hamlet in the greater Newburgh area. 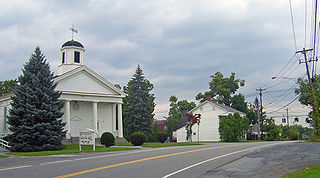 Accord is a hamlet in Ulster County, New York, United States. The population was 562 at the 2010 census.

Rifton is a hamlet in Ulster County, New York, United States. The population was 456 at the 2010 census.

Egbertville is the name of a neighborhood located immediately inland from, but classifiable within, the East Shore of the borough of Staten Island in New York City. Named after a family that owned a farm there in the 18th century, Egbertville was known for a time as Morgan's Corner, from 1838; soon after this, many Irish families arrived in the area, leading to its being referred to by such names as Tipperary Corners, New Dublin, and Young Ireland. 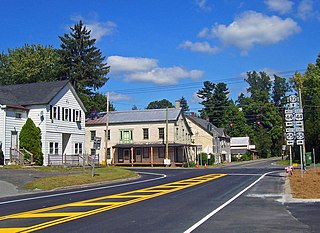 Modena is a hamlet in Ulster County, New York, United States. It is located in the northwestern corner of the town of Plattekill, centered at the junction of the US 44/NY 55 concurrency and NY 32.

Gibson Island is an island on the western shore of the Chesapeake Bay. It is part of Anne Arundel County and is the eastern terminus of Maryland Route 177. It is connected by a causeway to Pasadena, of which it is sometimes considered a part. The two locations do not share a ZIP code. 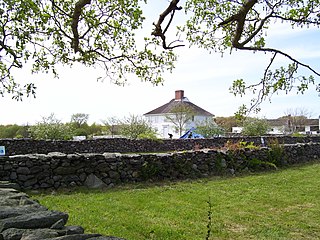 Casey Farm is a historic farm in Saunderstown, Rhode Island, United States. It is now a historic museum property, operated by Historic New England, and is open to the public.

Bloomingdale Park is a 138-acre (56 ha) park on the South Shore of Staten Island. It is located in the Prince's Bay neighborhood, and is bounded on the north by Ramona Avenue, on the west by Bloomingdale Road, on the east by Lenevar Avenue, and on the south by Drumgoole Road West and the Korean War Veterans Parkway. It is nearly bisected by Maguire Avenue, but the avenue's two spurs into the park from the north and south do not meet in the middle.

Doyle is an unincorporated community in Jefferson Township, Miami County, in the U.S. state of Indiana.

The Coursen House is a historic mansion in Fredon Township, New Jersey, which was built in 1805 by the Coursen Family.

Stafford Farm is a 100-acre farm in the Glendale section of Voorhees, New Jersey. In 1773, it was originally settled by the son of John Stafford, on nearby Short Hills Farm in Cherry Hill. John Stafford was George Washington's personal guard during the American Revolutionary War. The current location of the farm, located at the busy intersection of Evesham Road and White Horse Road, has been owned by its original family—longer than any other property in Voorhees. Motorists driving by the farm and those nearby at local shopping centers across the street can see the grazing horses and cattle. In addition, Standardbred race horses can be seen trotting and pacing around a half-mile training track on clear days. There were plans to develop a shopping center on the farm's property. Development did not occur, due to the efforts made by the township, county, and state to protect the land.

Lusscroft Farm is a historically significant dairy farming and scientific research facility located in Wantage Township in Sussex County, New Jersey that was established in 1914. It was first operated by James Turner, a stockbroker from Montclair, to promote scientific research in the dairy farming industry. In 1931, Turner donated the facility and land to the State of New Jersey and from 1931 to 1970 it was operated as an Agricultural Research Station by Rutgers University—New Jersey's land grant university.

Blu Radio is a radio station in Bogotá, Colombia, owned by Caracol TV.

Scotts Corner is a hamlet in Orange County, in the U.S. state of New York.