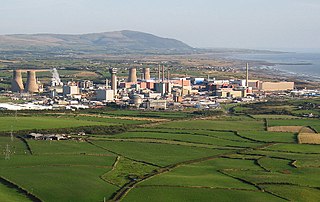 Sellafield is a large multi-function nuclear site close to Seascale on the coast of Cumbria, England. As of August 2022, primary activities are nuclear waste processing and storage and nuclear decommissioning. Former activities included nuclear power generation from 1956 to 2003, and nuclear fuel reprocessing from 1952 to 2022. Reprocessing ceased on 17th July 2022, when the Magnox Reprocessing Plant completed its last batch of fuel after 58 years of operation. 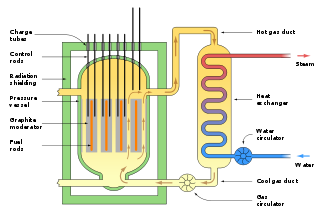 Magnox is a type of nuclear power/production reactor that was designed to run on natural uranium with graphite as the moderator and carbon dioxide gas as the heat exchange coolant. It belongs to the wider class of gas-cooled reactors. The name comes from the magnesium-aluminium alloy used to clad the fuel rods inside the reactor. Like most other "Generation I nuclear reactors", the Magnox was designed with the dual purpose of producing electrical power and plutonium-239 for the nascent nuclear weapons programme in Britain. The name refers specifically to the United Kingdom design but is sometimes used generically to refer to any similar reactor.

British Nuclear Fuels Limited (BNFL) was a nuclear energy and fuels company owned by the UK Government. It was a manufacturer of nuclear fuel, ran reactors, generated and sold electricity, reprocessed and managed spent fuel, and decommissioned nuclear plants and other similar facilities.

The United Kingdom Atomic Energy Authority is a UK government research organisation responsible for the development of fusion energy. It is an executive non-departmental public body of the Department for Business, Energy and Industrial Strategy (BEIS). 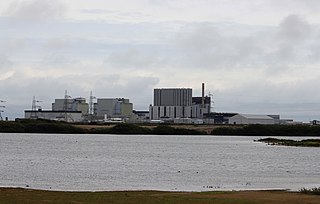 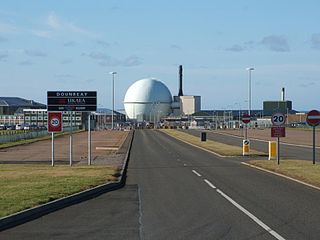 Dounreay is a small settlement and the site of two large nuclear establishments on the north coast of Caithness in the Highland area of Scotland. It is on the A836 road nine miles west of Thurso. 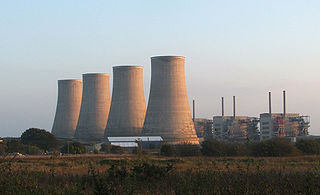 Chapelcross nuclear power station is a decommissioned and partly demolished Magnox nuclear power station near Annan in Dumfries and Galloway in southwest Scotland, which was in operation from 1959 to 2004. It was the sister plant to the Calder Hall plant in Cumbria, England; both were commissioned and originally operated by the United Kingdom Atomic Energy Authority. The primary purpose of both plants was to produce weapons-grade plutonium for the UK's nuclear weapons programme, but they also generated electrical power for the National Grid.

The Nuclear Decommissioning Authority (NDA) is a non-departmental public body of the Department for Business, Energy and Industrial Strategy, formed by the Energy Act 2004. It evolved from the Coal and Nuclear Liabilities Unit of the Department of Trade and Industry. It came into existence during late 2004, and took on its main functions on 1 April 2005. Its purpose is to deliver the decommissioning and clean-up of the UK's civil nuclear legacy in a safe and cost-effective manner, and where possible to accelerate programmes of work that reduce hazard. The NDA does not directly manage the UK's nuclear sites. It oversees the work through contracts with specially designed companies known as site licence companies. The NDA determines the overall strategy and priorities for managing decommissioning. 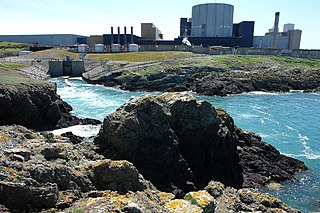 Wylfa nuclear power station is a Magnox nuclear power station undergoing decommissioning. Wylfa is situated west of Cemaes Bay on the island of Anglesey, off the northwestern coast of Wales. Construction of the two 490 MW nuclear reactors, known as Reactor 1 and Reactor 2, began in 1963. They became operational in 1971. Wylfa was located on the coast because seawater was used as a coolant.

Sellafield Ltd is a nuclear decommissioning Site Licence Company (SLC) controlled by the Nuclear Decommissioning Authority (NDA), a government body set up specifically to deal with the nuclear legacy under the Energy Act 2004. From 2008–2016, it was operated under licence from the NDA by a third party Parent Body Organisation called Nuclear Management Partners (NMP). Since the termination of the NMP contract it has been brought back under direct governmental control by making it a subsidiary of the NDA.

Greenfield status is an end point wherein a parcel of land that had been in industrial use is, in principle, restored to the conditions existing before the construction of the plant.

The Nuclear Liabilities Fund is a fund of the UK Government to provide arrangements for funding certain long-term costs for the decommissioning of eight nuclear power stations formerly owned by British Energy, now EDF Energy. Responsibility for the fund within government lies with the Shareholder Executive, on behalf of the Department for Business, Energy and Industrial Strategy.

Nuclear decommissioning is the process whereby a nuclear facility is dismantled to the point that it no longer requires measures for radiation protection. The presence of radioactive material necessitates processes that are potentially occupationally hazardous, expensive, time-intensive, and present environmental risks that must be addressed to ensure radioactive materials are either transported elsewhere for storage or stored on-site in a safe manner. The challenge in nuclear decommissioning is not just technical, but also economical and social.

The Low Level Waste Repository is the UK's central long-term store for low-level radioactive waste. It is located on the West Cumbrian coast near Drigg village. It is a subsidiary of the Nuclear Decommissioning Authority. 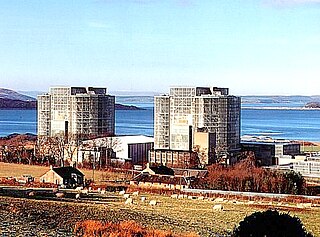 Magnox Ltd is a nuclear decommissioning Site Licence Company (SLC) under the Nuclear Decommissioning Authority (NDA), a government body set up specifically to deal with the nuclear legacy under the Energy Act 2004. In September 2019, it became a direct subsidiary of the NDA.

International Nuclear Services (INS) is a United Kingdom company involved in the management and transport of nuclear fuels. INS is based in Risley, near Warrington, and is operated by Nuclear Transport Solutions, a wholly owned subsidiary of the UK Government's Nuclear Decommissioning Authority (NDA). 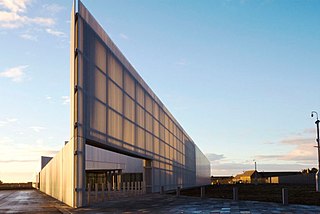 Nucleus, the Nuclear and Caithness Archives is the national archive of the British civil nuclear industry and the archive for the County of Caithness. The archives were constructed by the Nuclear Decommissioning Authority (NDA) and opened in 2017. Work continues at the facility to bring together all of the NDA's archive material from 16 separate sites. The Caithness county archives, dating from 1589 are also held at the site.

Dorothy Anne Gradden OBE is a British Nuclear Engineer for Sellafield Ltd. She leads the projects to decommission the large "legacy" ponds. These are nationally important projects as part of country's nuclear clean up operation on "Britain’s biggest and most hazardous nuclear waste site". In 2017 she was given an OBE and in 2019 the Nuclear Decommissioning Authority recognised her as a role model in their Safety and Wellbeing Awards.