The Zoological Society of London (ZSL) is a charity devoted to the worldwide conservation of animals and their habitats. It was founded in 1826. Since 1828, it has maintained the London Zoo, and since 1931 Whipsnade Park.

The Hong Kong Zoological and Botanical Gardens is one of the oldest zoological and botanical centres in the world, and the oldest park in Hong Kong. Founded in 1864, its first stage was opened to the public in 1871. It occupies an area of 5.6 hectares, in Central, on the northern slope of Victoria Peak.

Edward Turner Bennett was an English zoologist and writer. He was the elder brother of the botanist John Joseph Bennett. Bennett was born at Hackney and practiced as a surgeon, but his chief pursuit was always zoology. In 1822 he attempted to establish an entomological society, which later became a zoological society in connection with the Linnean Society. This in turn became the starting point of the Zoological Society of London, of which Bennett was Secretary from 1831 to 1836. His works included The Tower Menagerie (1829) and The Gardens and Menagerie of the Zoological Society (1831). He also wrote, in conjunction with G. T. Lay, the section on Fishes in the Zoology of Beechey's Voyage (1839). In 1835 he described a new species of African crocodile, Mecistops leptorhynchus, the validity of which was confirmed in 2018. 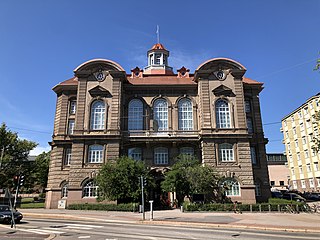 The Finnish Museum of Natural History, established in 1988, is a research institution under the University of Helsinki in Finland, based in Helsinki, Finland. It is a natural history museum responsible for the national botanical, zoological, geological and paleontological collections, which consist of samples from around the world. The collections serve scientific, public informational and educational purposes.

The Frankfurt Zoological Garden is the zoo of Frankfurt, Germany. It features over 4,500 animals of more than 510 species on more than 11 hectares. The zoo was founded in 1858 and is the second oldest zoo in Germany, after Berlin Zoological Garden. It lies in the eastern part of the Innenstadt. Bernhard Grzimek was director of the zoo after World War II from 1945 until 1974.

The Manila Zoo, formally known as the Manila Zoological and Botanical Garden, is a 5.5-hectare (14-acre) zoo located in Malate, Manila, Philippines that opened on July 25, 1959.

The Natural History Museum at the University of Oslo is Norway's oldest and largest museum of natural history. It is situated in the neighborhood of Tøyen in Oslo, Norway.

The Manchester Zoological Gardens opened in 1838, on a 15-acre (6 ha) site between Broom Lane and Northumberland Street in Broughton, now in Salford, England. Attractions included a Grand Menagerie, a lake, a maze, an archery ground, and a series of landscaped walks. The gardens were laid out by a company of local business men, on land rented from the Rev. John Clowes of Broughton Hall, who had become interested in botany and horticulture in later life. The gardens competed with John Jennison's Belle Vue Zoological Gardens opened three years earlier, but the venture was commercially unsuccessful and closed in 1842. Some of the animals were acquired by the Belle Vue Zoo, others went to London Zoo and to Hampton Court.

The Boston Aquarial and Zoological Gardens in Boston, Massachusetts, featured a public aquarium and zoo. It was located in the Financial District on Central Court. On display were "hundreds of specimens of the finny tribe there to be seen sporting in their native element, in all their variety of hue and shape" as well as other animals. James Ambrose Cutting and Henry D. Butler ran the business, derived from an earlier incarnation known as the Boston Aquarial Gardens.P.T. Barnum bought it in 1862, renovated it, and reopened it as Barnum's Aquarial Gardens.

Vandalur Reserve Forest is a protected area located in the suburb of Vandalur in the southwestern part of Chennai, about 30 km from the city centre. It is bordered by the Grand Southern Trunk (GST) Road in the west and Suddhanandha Bharathi Street on the northern and the eastern sides, and is intersected by the Vandalur–Kelambakkam Road on the southern side. The reserve forest contains Arignar Anna Zoological Park, the largest zoological garden in the Indian Subcontinent.

V O Chidambaranar park and zoo is a zoological garden and amusement park located in Coimbatore, Tamil Nadu, India. As of 2013, the park houses around 890 animals including 335 birds, 106 mammals and 54 reptiles. The park is named after freedom fighter V O Chidambaram Pillai and is managed by Coimbatore city Corporation.