Tomás Leonardi (born 7 January 1987 in Buenos Aires, Argentina) is an Argentine rugby union footballer. He is currently unattached to a club.

A player for S.I.C. in Argentina, he also was included in the Argentinian high performance squad, the Pampas XV to play in the South African Vodacom Cup competitions in 2010, 2011 and 2012.

Pampas XV was an Argentine rugby union team that was based in South Africa when they participated in the South African second domestic competition, the Vodacom Cup between 2010 and 2013. The team was established in 2010 and was composed almost entirely by members of the High Performance Plan of the UAR. It was an unofficial third national team, below the Senior squad and Argentina XV, although it has been described as the second team as well.

The Vodacom Cup was an annual rugby union competition in South Africa. Annual Vodacom Cup competitions were played between its inaugural season in 1998 and 2015 and was contested between February and May each year. Mobile communications provider Vodacom was the title sponsor for the entire duration of the competition.

The 2010 Vodacom Cup was contested from 26 February to 7 May. The 2010 Vodacom Cup is the 13th edition of this annual domestic cup competition. The Vodacom Cup is played between provincial rugby union teams in South Africa from the Currie Cup Premier and First Divisions, as well as two invitational teams, the Welwitschias from Namibia and the Pampas XV from Argentina.

He joined the South African team Southern Kings for the 2013 Super Rugby season. [1] However, he made just one single substitute appearance, coming on as a 58th-minute substitute against the Chiefs. [2]

The Southern Kings, known for sponsorship reasons as the Isuzu Southern Kings are a South African rugby union team that played Super Rugby in 2013, 2016 and 2017, before joining the Pro14 competition prior to the 2017–18 season. The team is based at the Nelson Mandela Bay Stadium in Port Elizabeth and was formally announced at the opening of this stadium on 16 June 2009, in time to coincide with the 2009 British and Irish Lions tour to South Africa. 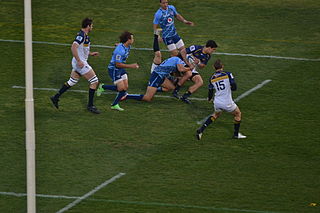 The 2013 Super Rugby season was the third season of the new 15-team format for the Super Rugby competition involving teams from Australia, New Zealand and South Africa. The tournament was won by the Chiefs, who defeated the Canberra-based Brumbies 27–22 in the competition final. For sponsorship reasons, this competition is known as FxPro Super Rugby in Australia, Investec Super Rugby in New Zealand and Vodacom Super Rugby in South Africa. Including the past incarnations as Super 12 and Super 14, this was the 18th season of the Southern Hemisphere's premier domestic competition. Conference matches took place every weekend from 15 February until 13 July – with a break between rounds 17 and 18 for internationals games – followed by the play-offs series that culminated in the final on 3 August.

He was initially named in their touring squad to Australasia for games against Crusaders, Hurricanes, Brumbies and Rebels, [3] but were then recalled [4] after the Kings fielded more than the allowed two foreigner players in their match against the Chiefs. [5] He did, however, make four appearances for the Eastern Province Kings in the domestic 2013 Vodacom Cup tournament, with injury preventing him making more appearances.

The Crusaders are a New Zealand professional rugby union team based in Christchurch, who compete in the Super Rugby competition. They have won 9 titles.

The Hurricanes are a New Zealand professional rugby union team based in Wellington that competes in Super Rugby. The Hurricanes were formed to represent the lower North Island, including the East Coast, Hawke's Bay, Horowhenua Kapiti, Manawatu, Poverty Bay, Wairarapa-Bush, Wanganui and Wellington unions. They currently play at Westpac Stadium, having previously played at the now-defunct Athletic Park.

The Brumbies are an Australian professional rugby union football team competing in the Super Rugby. The team is based in Canberra, Australian Capital Territory (ACT) and named for the wild horses which inhabit the capital's hinterland. The team represents the ACT and southern New South Wales (NSW) regions.

He left the Kings in July 2013 [6] and, after a few appearances for former side S.I.C. in the Torneo de la URBA in Argentina, he moved to Scotland to join Edinburgh Rugby. [7]

The San Isidro Club is an Argentine sports club based in the Boulogne Sur Mer district of Greater Buenos Aires. The club has gained recognition due to its rugby union team, being one of the most successful clubs of Argentina with 25 Torneo de la URBA championships won. SIC has also won 4 Nacional de Clubes tournaments.

Leonardi was signed for the new Japanese Super Rugby team Sunwolves for the 2016 season but was later announced in the Leicester Tigers European cup squad in October 2016 as a temporary injury replacement for Mike Williams. [8] Leonardi played part of the Anglo-Welsh Cup game against Bath in November 2016. [9] Leonardi wasn't announced in the squad for the rest of the 2016/17 season. As of May 2017, Leonardi isn't recognised in the Tigers' squad list. [10]

The Sunwolves – currently known as the HITO-Communications Sunwolves for sponsorship reasons – is a professional rugby union team and is Japan's representative team in SANZAAR's international Super Rugby competition. The team is based in Tokyo, Japan, but also plays some home matches in Singapore. They made their debut in Super Rugby in 2016.

Michael Patrick Williams is a Zimbabwean rugby player for Leicester Tigers. He previously played for Worcester Warriors in the RFU Championship. He plays primarily as a lock but he can also play at flanker.

He made his debut for Argentina in November 2008 against Chile. [11] In May 2010, he was selected in a squad of over 40 players to represent Argentina in the two-test Summer tour of Europe. He has been a regular international for Argentina ever since.

Mahlatse Chiliboy Ralepelle, is a rugby union player for the Sharks in Super Rugby and in the Currie Cup. His usual position is at hooker.

Scott Mathie is a former rugby union player that played as a scrum-half. Mathie played for the Blue Bulls, Sharks, Leeds Carnegie, Sale Sharks and Eastern Province Kings. He retired in October 2013. 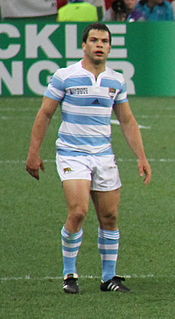 Nicolás Vergallo is an Argentine rugby union footballer, currently playing in France for Lyon. He plays at scrum-half.

Siyanda Grey is a South African rugby union player for the Eastern Province Elephants in the Currie Cup and in the Rugby Challenge. His usual position is centre or wing.

Sarel Petrus Marais is a South African rugby union player for the Stormers in Super Rugby and Western Province in the Currie Cup.

Marcello Edward Dennis Sampson is a South African rugby union player, who most recently played as a winger with Western Province.

Shane Edward Gates is a South African rugby union player, currently playing in the Japanese Top League with NTT Communications Shining Arcs. His usual position is fly-half or inside centre.

Chrysander Antonio Botha is an international rugby player for the Namibian rugby team. He plays full-back and plays for the Welwitschias in the South African Rugby Challenge competition.

Wietz Tobias Botes in a South African-born rugby union player, who most recently played for the Eastern Province Kings. He normally plays as a scrum-half or fly-half.

Louis Schreuder is a South African rugby union player who plays as a scrum-half for the South Africa national team, the Sharks in Super Rugby and in the Currie Cup and the Sharks XV in the Rugby Challenge.

Shaun Harold Venter is a South African rugby union player for the Cheetahs in the Pro14 and the Free State Cheetahs in the Currie Cup. He is a utility back, having started matches at full-back, centre, winger and scrum-half, but since 2011 he has been predominantly used as a scrum-half.

Johan David Herbst is a former South African rugby union player, who played first class rugby between 2011 and 2016. He played for Griquas, the SWD Eagles and the Pumas in the domestic Currie Cup and Vodacom Cup competitions and made one appearance for the Southern Kings in Super Rugby. His regular position is scrum-half or wing.

Elric van Vuuren is a former South African rugby union player that played Currie Cup and Vodacom Cup rugby for the Mighty Elephants, Border Bulldogs and SWD Eagles between 2006 and 2015. He also made two appearances for the Southern Kings during the 2013 Super Rugby season. His regular position was full-back, centre or fly-half.

Pablo Matera is an Argentine rugby union footballer who plays as a flanker for the Argentine Super Rugby side Jaguares. Before his arrival in Super Rugby, he played for Leicester Tigers in England and the Pampas XV in the South African Vodacom Cup. Matera has been a regular starter for Argentina in international rugby ever since his debut in 2013, having played over 50 tests for his country since.

Ricky Darryl Schroeder is a former South African rugby union player, who most recently played with the Southern Kings in Super Rugby. His regular position is scrum-half.

The Southern Kings participated in their first ever Super Rugby competition in 2013. They won three, drew one and lost twelve of their matches during the regular season to finish fifth and last in the South African Conference and fifteenth and last on the overall log. Their top try scorer in the competition was Wimpie van der Walt, who got six tries, and their top points scorer was Demetri Catrakilis, who scored 142 points. As a result of finishing bottom of the South African Conference, they had to play a two-legged promotion/relegation play-off series against the Lions. The Lions beat them 44–42 on aggregate to return to Super Rugby in 2014 at the expense of the Kings.