Tomar (also called/spelled Tomara) is a clan, some members of which ruled parts of North India at different times. People belonging to the Tomara clan are found among the Rajputs, [1] Jats [2] and Gurjars [3] [ unreliable source? ] of northern India.

The area of Morena, Bhind and Gwalior in northern Madhya Pradesh is referred to as "Tomarghar" meaning "Home of Tomars" due to its large population of Tomar. [4]

The Tomar clan claim descent from Chandravanshi dynasty, naming the Mahabharata warrior Arjuna among their forebears. [5]

The earliest extant historical reference to the Tomaras (the Sanskrit form of "Tomar") occurs in the Pehowa inscription of the Gurjara-Pratihara king Mahendrapala I (r. c. 885-910 CE). [6] This undated inscription suggests that the Tomara chief Gogga was a vassal of Mahendrapala I. [7]

During 9th-12th century, the Tomars of Delhi ruled parts of the present-day Uttar Pradesh madhya pradesh rajasthan Delhi and Haryana. [8] Much of the information about this dynasty comes from bardic legends of little historical value, and therefore, the reconstruction of their history is difficult. [9] According to the bardic tradition, the dynasty's founder Anangapal Tomar (that is Anangapala I Tomara) founded Delhi in 736 CE. [6] However, the authenticity of this claim is doubtful. [9] The bardic legends also state that the last Tomara king (also named Anangapal) passed on the throne of Delhi to his son-in-law Prithviraj Chauhan. This claim is also inaccurate: historical evidence shows that Prithviraj inherited Delhi from his father Someshvara. [9] According to the Bijolia inscription of Someshvara, his brother Vigraharaja IV had captured Dhillika (Delhi) and Ashika (Hansi); he probably defeated a Tomara ruler. [10]

Anangpal's grandson Kosal Dev Singh is said to have established Kosli in 1193 A.D. [11]

The Tomaras of Gwalior ruled an area north of Gwalior known as the Tonwarghar tract. The most notable of these rulers was Man Singh Tomar (1486-1517). [12]

Chandragupta I was a king of the Gupta dynasty, who ruled in northern India. His title Maharajadhiraja suggests that he was the first emperor of the dynasty. It is not certain how he turned his small ancestral kingdom into an empire, although a widely accepted theory among modern historians is that his marriage to the Lichchhavi princess Kumaradevi helped him extend his political power. Their son Samudragupta further expanded the Gupta empire. 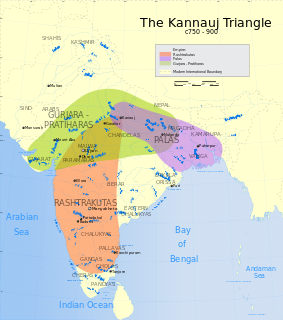 The Gurjara-Pratihara dynasty was an imperial power during the Late Classical period on the Indian subcontinent, that ruled much of Northern India from the mid-8th to the 11th century. They ruled first at Ujjain and later at Kannauj.

Chauhan, Chouhan, Chohan, or Chohhan, is a surname of the Rajput caste from North India.

Prithviraja III, popularly known as Prithviraj Chauhan or Rai Pithora was a king from the Chahamana (Chauhan) dynasty. He ruled Sapadalaksha, the traditional Chahamana territory, in present-day north-western India. He controlled much of the present-day Rajasthan, Haryana, and Delhi; and some parts of Punjab, Madhya Pradesh and Uttar Pradesh. His capital was located at Ajayameru, although the medieval folk legends describe him as the king of India's political centre Delhi to portray him as a representative of the pre-Islamic Indian power. 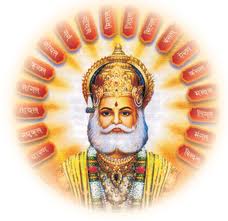 Agrawal is a community found throughout northern, central and western India, mainly in the states of Rajasthan, Haryana, Punjab, Chandigarh, Himachal Pradesh, Uttarakhand, Delhi, Chhattisgarh, Gujarat and Uttar Pradesh. Members of the Agarwal community were also found in what are now the Pakistani provinces of Punjab and Sindh, though at the time of the partition of India, most of them migrated across the newly created border to independent India. The total Agrawal population in India is estimated to be around 10-15 million, which makes them around 1% of the Indian population. Most Agarwals follow the Vaishnava denomination of Hinduism, though some have converted to Jainism. Agrawals are divided into eighteen exogamous clans (gotras). Many members of this community use their caste name Agarwal as their surname, while others use that of their gotras.

Qila Rai Pithora or Lal Kot is a fortified complex in present-day Delhi, which includes the Qutb Minar complex. It is also termed as the "First city of Delhi". Remains of the fort walls are scattered across South Delhi, visible in present Saket, Mehrauli around Qutb complex, Sanjay Van, Kishangarh and Vasant Kunj areas.

The Prithviraj Raso is a Brajbhasha epic poem about the life of the 12th century Indian king Prithviraj Chauhan. It is attributed to Chand Bardai, who according to the text, was a court poet of the king.

Ambah is a city and a municipality in Morena district in the state of Madhya Pradesh, India. It is the administrative headquarter of Ambah-Porsa Block. It was formerly known as Ambrish Nagari. Kamlesh jatav (SC) of the Congress party is the present MLA from Ambah-Porsa Constituency. 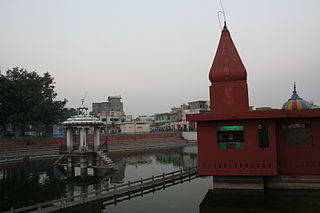 Pehowa is a town and a municipal committee in Kurukshetra district in the Indian state of Haryana. The Hindu genealogy registers at Peohwa, Haryana are kept here at the Pruthudak Tirath on the banks of Sarasvati river.

Gurjar or Gujjar is an ethnic agricultural and pastoral community of India, Pakistan, and Afghanistan. They were known as Gurjaras during the medieval times, a name which is believed to have been an ethnonym in the beginning as well as a demonym later on. Although traditionally they have been involved in agriculture, Gurjars are a large heterogeneous group that is internally differentiated in terms of culture, religion, occupation, and socio-economic status. The historical role of Gurjars has been quite diverse in society, at one end they have founded kingdom, districts, cities, towns, and villages, and at the other end, they are also nomads with no land of their own.

Kanwari, also spelled Kunwari, or Kwari, is a village of 7,000 population, in Hansi-I Tehsil, Hisar-1 Rural Development Block, Hansi and Hisar of Hisar District of Hisar Division in the Haryana state of India. It is part of the saat bas bhaichara grouping of 7 villages. The village has 4 panna/patti (subdivisions), named as Nangalia Panna , upparla Panna , parla Panna , etc. with a total revenue land area of 43903 kanal or 5487 acre as per HALRIS records.

The Rawe Rajputs are the members of a sub-group of Rajput clans and are categorised as upper caste Rajputs. They claim descendancy from eminent rulers of aristocratic Rajput clans and are natives of the Indian states of Delhi and Uttar Pradesh. The variations of the name include Raya Rajput, Rava Rajput,Rawa Rajput and Rawad Rajput. 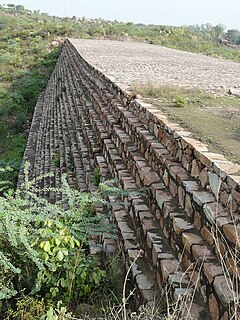 The Anangpur Dam is an Indian hydraulic engineering structure built during the reign of the King Anangpal I of the Tomara dynasty in the 8th century. It is located near the Anangpur village in Faridabad district, Haryana, India.

Anangpal II, popularly known as Anangpal Tomar, was an Indian king who belonged to the Tomara dynasty. He is credited to have established and populated Delhi during his reign in the 11th century.

The Tomara dynasty ruled parts of present-day Delhi and Haryana in India during 8th-12th century. Their rule over this region is attested to by multiple inscriptions and coins. In addition, much of the information about them comes from medieval bardic legends, which are not historically reliable. They were displaced by the Chahamanas of Shakambhari in the 12th century. 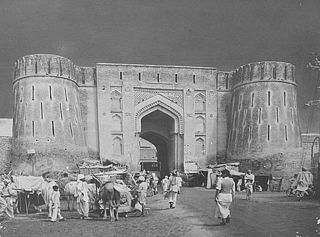 Asigarh Fort, also called Hansi Fort is located on the eastern bank of Amti lake in Hansi town of Haryana, India, about 135 km from Delhi on NH9. Spread over 30 acres, in its prime days this fort used to be in control of 80 forts in the area around it. The fort is said to be one of the most impregnable forts of ancient India and has been declared a centrally protected monument by ASI in 1937.

The Chahamanas of Shakambhari, colloquially known as the Chauhans of Sambhar, were a dynasty that ruled parts of the present-day Rajasthan and its neighbouring areas in India, between 6th and 12th centuries. The territory ruled by them was known as Sapadalaksha. They were the most prominent ruling family of the Chahamana (Chauhan) clan, and were categorized among Agnivanshi Rajputs in the later medieval legends.

Someshvara was an Indian king belonging to the Chahamana dynasty and ruled parts of present-day Rajasthan in north-western India. He was brought up at the Chaulukya court in Gujarat by his maternal relatives. After death of Prithviraja II, the Chahamana ministers brought him to the capital Ajmer and appointed him as the new king. He is said to have commissioned several Shiva temples in Ajmer, and is best known as the father of Prithviraja III.