Tommy Biddle (a.k.a. Thomas J. Biddle, Jr.) is an American polo player. He is an eight-goaler in outdoor polo and a ten-goaler in arena polo. He has won many national and international tournaments.

He started his professional polo career at the Gulfstream Polo Club. [1] He is an eight-goal player in outdoor polo and has been a 10-goaler in arena polo since 2012. [2] [3] He is a player-in-residence at the Greenwich Polo Club in Greenwich, Connecticut. [4]

The Gulfstream Polo Club was a polo club in Lake Worth, Florida. Since 1923, Gulfstream Polo Club was one of the most prominent polo clubs in North America, particularly during the Florida season (December-April). Gulfstream was managed by Marla Connor for 18 years until it closed in May 2016 at the end of the polo season. Throughout its long history it offered a wide array of tournaments, with 4, 6, and 10 Goal Leagues as well as Ladies Tournaments.

Greenwich Polo Club is a polo club in Greenwich, Connecticut that was established in 1981. It is one of only three polo venues in the United States offering high-goal polo.

Greenwich is a town in Fairfield County, Connecticut, United States. As of the 2010 census, the town had a total population of 61,171. It is the 10th largest municipality in Connecticut, and the largest that functions as a town.

In 2002, he won the U.S. Open Polo Championship at the Royal Palm Polo Club in Boca Raton, Florida on the Coca-Cola Polo Team alongside Gillian Johnston, Miguel Novillo Astrada and Adam Snow. [5] He has also won the Centennial Cup from the Federation of International Polo and the Monty Waterbury Cup. [2]

The US Open Polo Championship is an annual polo championship in the United States. It is organized by the United States Polo Association (USPA). It was first played in 1904 at Van Cortlandt Park in The Bronx in New York City. At the first game the Wanderers defeated the Meadowbrook Freebooters.

Boca Raton is the southernmost city in Palm Beach County, Florida, United States, first incorporated on August 2, 1924 as "Bocaratone," and then incorporated as "Boca Raton" in 1925. The 2015 population estimated by the U.S. Census Bureau was 93,235. However, approximately 200,000 people with a Boca Raton postal address reside outside its municipal boundaries. Such areas include newer developments like West Boca Raton. As a business center, the city also experiences significant daytime population increases. It is one of the wealthiest communities in South Florida. Boca Raton is 43 miles (69 km) north of Miami and is a principal city of the Miami metropolitan area, which had a population of 6,012,331 people as of 2015.

Gillian Johnston is an American polo player and patron.

Manuel Andrada was an Argentine nine-goal polo player who won the gold medal in the 1936 Summer Olympics.

Tim Gannon is an American businessman and polo player.

Robert E. Walton, a.k.a. "Rob Walton", is an American polo player and coach. 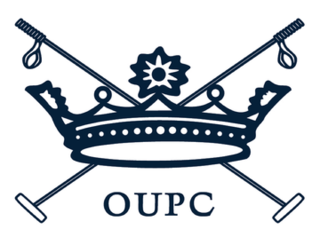 The Oxford University Polo Club is the Discretionary Full Blue sports club for competitive polo at Oxford University. Founded in 1874 it is one of the four oldest continuing polo clubs world wide. Its annual Varsity Match against Cambridge established in 1878 is the 2nd oldest continuing Polo Fixture in the Western World. It is played at Guards Polo Club, England, usually at the beginning of June.

Marc Ganzi is an American businessman and polo player. He is the founder and Chief Executive Officer of Global Tower Partners.

Nicolas Ezequiel Roldan is an American polo player and model.

Peter Busch Orthwein is an American heir, businessman and polo player. He is the co-founder and Chairman of Thor Industries.

Stephen Sanford was an American heir and polo champion.

The Aiken Polo Club is a polo club in Aiken, South Carolina.

The Kihikihi Polo Club is a historic polo club in Kihikihi, New Zealand. Founded in 1892, it has hosted many international tournaments, including the Waikato Open and the New Zealand Savile Cup.

The Auckland Polo Club is a historic polo club in Auckland, New Zealand. Founded in 1888, it hosts many national and international tournaments, including the annual BMW Polo Open.

The Grand Champions Polo Club is a polo club in Wellington, Florida.