Thomas Gallagher is a boxing trainer best known for his role on reality show The Contender as a profane and straight-shooting trainer and coach. [1] In 2014, Gallagher was a cast member of season 2 of Esquire Network's White Collar Brawlers. [2] Gallagher trained WBC welter-weight champion Andre Berto when he was an amateur and now coaches a team of amateurs at Inferno Gym Naples, Florida.

As an amateur fighter, Gallagher won a Golden Gloves title in 1959, but was prevented from turning pro due to a kidney problem. [3]

Gallagher since has worked almost forty years as a trainer, manager, promoter, and gym owner and operator. He has been a factor in the careers of such boxers as Doug DeWitt, Vito Antuofermo, Don Lalonde, Lou Savarese, Sergei Kobozev, Segundo Mercado, Merqui Sosa and Johnny Turner. [4] [5]

Gallagher is married with four children and nine grandchildren.

Michael Bentt is a British-American film and television actor, and retired professional boxer who competed from 1989 to 1994. Of Jamaican heritage, he was born in East Dulwich, London, but raised in the Cambria Heights section of Queens in New York City. Bentt won the WBO heavyweight title from Tommy Morrison in 1993, losing the title in his first defense in 1994 to Herbie Hide. As an amateur he won bronze medals at the 1986 World Championships and 1987 Pan American Games. 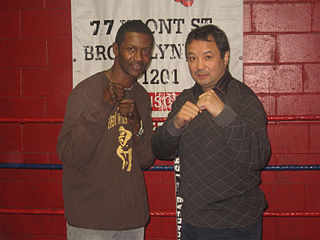 Mark Anthony Breland is an American retired world champion boxer who won five New York Golden Gloves titles, surpassing Sugar Ray Robinson for the most wins in the history of the Golden Gloves. He is currently in 6 Halls of Fame: The Connecticut Boxing Hall of Hame, The New York State Boxing Hall of Hame, The New Jersey Boxing Hall of Fame, The Golden Gloves Hall of Fame, The African American Ethnic Sports Hall of Fame, and The USA Boxing Olympics Alumni Association Hall of Fame. Additionally, Breland received The 2018 Emanuel Steward Trainer of the Year Award. Breland is notably the only amateur boxer to have ever graced the cover of Ring magazine, and the only amateur whose picture hangs in Colorado Springs U.S. Olympic Training Center. The Smithsonian Museum for African American History and Culture in Washington, DC displays an honorary picture of Mark Breland in recognition of his achievements.

Mitch Green is an American former professional boxer who competed from 1980 to 2005. He is best known for going the distance with Mike Tyson, who was undefeated in 1986, and for his later street brawl with Tyson in 1988. A toothpick dangling between his lips became his trademark at any public appearance.

Jeremy Williams is a former professional boxer and mixed martial artist. He challenged once for the WBO Heavyweight title in 1996.

Gleason's is a boxing gym located on the Brooklyn waterfront. The gym was founded by Peter Gagliardi, a former bantamweight, who changed his name to Bobby Gleason. It moved to Manhattan and then to Brooklyn. Gleason's is now owned by Bruce Silverglade.

Sechew Powell is an American former professional boxer who competed from 2002 to 2014 and challenged for the IBF junior middleweight title in 2011.

Errol Christie was an English professional boxer and boxing trainer. He was the captain of the English amateur boxing team from 1980 to 1983 and European amateur champion in 1983. After turning professional he was a regular fixture on ITV Fight Night in the 1980s. After retiring from boxing he became a trainer in white-collar boxing.

White-collar boxing is a form of boxing in which people in white-collar professions train to fight at special events. Most have had no prior boxing experience. 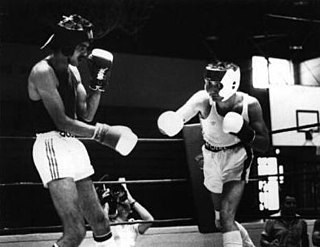 Curt McCune, from Homewood (Birmingham), Alabama, is a former amateur boxer and 4-time State of Alabama amateur boxing champion, and was the 1994 International Law Enforcement Games Boxing Champion at 193 lbs. McCune is a current private coach and trainer for amateur and professional boxers.

Joe Gallagher is a former amateur boxer. He became an amateur boxing coach in 1993 before joining the professional ranks as a trainer in 2001.

Jonathan Hamm is a former standout amateur boxer, actor, football player, and current mixed martial artist. Hamm was the #1 Super-Heavyweight Amateur boxer in the United States in 2011 after winning the 2011 U.S. Nationals. Hamm was an alternate in the super-heavyweight division of the 2012 London Olympic Games for the U.S. Hamm earned Black College All-American, 1st Team All Conference, 1st Team All-Region, and The Marion E. Jackson Defensive Player of the Year in 2006. Hamm is originally from Atlanta, Georgia, and trained out of Jackson's Submissions Fighting in Albuquerque, New Mexico. His manager was Malki Kawa, founder of First Round Management out of Miami, Florida, who houses UFC stars Jon Jones, Benson Henderson, Carlos Condit, Miesha Tate, and Frank Mir. 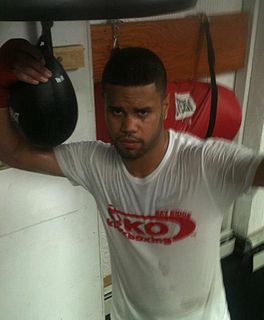 Shemuel Pagan is an American professional boxer in the lightweight division. He is trained by his father, Robert Pagan. He is currently training at Sadam Ali's gym in Bay Ridge, Brooklyn. Shemuel Pagan is a Puerto Rican American of strict Jewish faith.

Giulio Gallucci (1924–2006), also known as Johnny Duke, was an American, Hartford, Connecticut-born boxer and coach. Duke fought professionally from 1942 to 1946, and was inducted into the Connecticut Boxing Hall of Fame's inaugural class. He also is a member of the National Golden Gloves Hall of Fame. His is beloved and remembered for his work with inner city youth.

Shane Benis is an entrepreneur in Shanghai, China. He is the founder/CEO of China Sports Promotions and producer of White Collar Boxing International, a leading event management company promoting white-collar boxing in the Asian Pacific. While born in London, Shane spent most of his childhood in Kampala, Uganda which is where his father originates from.