Tomorrow's Youth Organization (TYO) is an American, non-governmental organization that works in disadvantaged areas of the Middle East, doing community service and charitable work for children, youth and parents. Its flagship centre is located in the Khallet al Amood neighbourhood in Nablus in the Palestinian Territories. It primarily services the refugee camps of Balata, Askar, and El-Ain. [1]

It was founded in by Hani Masri who grew up in the Balata refugee camp. He is currently based in the US and known for his advocacy of the Middle East peace process and children's issues. [2]

TYO has a permanent staff of 12 employees, which are Palestinian, American, and other nationalities. It actively recruits American students to volunteer and work at the centre in Nablus. [3]

It is supported by the likes of Cherie Blair, Quincy Jones, [4] and Bill Clinton. [5]

The year 2000 in Israel and Palestine marked the beginning of the al-Aqsa Intifada leading to a number of Palestinian and Israeli deaths.

The 2000 Camp David Summit was a summit meeting at Camp David between United States president Bill Clinton, Israeli prime minister Ehud Barak and Palestinian Authority chairman Yasser Arafat. The summit took place between 11 and 25 July 2000 and was an effort to end the Israeli–Palestinian conflict. The summit ended without an agreement. 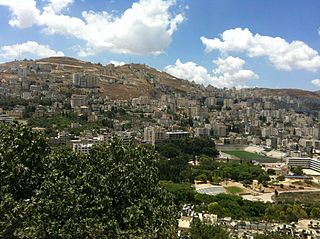 Nablus is a city in the northern West Bank, approximately 49 kilometers (30 mi) north of Jerusalem, with a population of 126,132. Located between Mount Ebal and Mount Gerizim, it is the capital of the Nablus Governorate and a Palestinian commercial and cultural center, home to An-Najah National University, one of the largest Palestinian institutions of higher learning, and the Palestinian stock-exchange.

Hussam Muhammad Bilal Abdo is a Palestinian from the Masahiya area of Nablus, who, as a teenager, made international headlines on 24 March 2004, when he entered the Hawara Checkpoint in the West Bank, with eight kilos (18 lbs) of explosives strapped to his body as part of a suicide attack attempt. 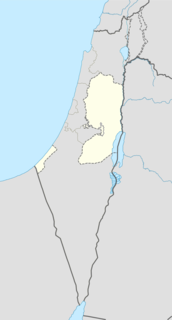 Balata Camp is a Palestinian refugee camp established in the northern West Bank in 1950, adjacent to the city of Nablus. It is the largest refugee camp in the West Bank. Balata Camp is densely populated with 30,000 residents in an area of 0.25 square kilometers.

Nazeh Darwazi (ca. 1958-1961 – 19 April 2003), was a Palestinian freelance cameraman for the US news agency Associated Press Television Network (APTN) and Palestinian state television when he was killed in Nablus in the West Bank while reporting, according to eyewitnesses, by a bullet in the head fired by an Israeli soldier from a distance of about 20 yards after having pointed his weapon at the clearly marked journalist.

Mai Masri is a Palestinian filmmaker, director and producer. Her films are primarily documentaries which focus on the real life struggles of the women and children living in the occupied Palestinian territories and Lebanon. She has received over 60 international awards for her films and is hailed as a pioneer in the Middle Eastern film industry. 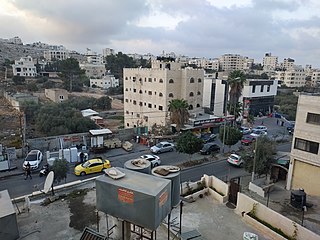 Dheisheh is a Palestinian refugee camp located just south of Bethlehem in the West Bank. Dheisheh was established in 1949 on 0.31 square kilometers of land leased from the Jordanian government. The camp was established as a temporary refuge for 3,400 Palestinians from 45 villages west of Jerusalem and Hebron who fled during the 1948 Arab-Israeli War.

Project Hope Palestine is a UK registered non-governmental organisation providing free educational and recreational programmes for children in and around the city of Nablus, in the northern part of the State of Palestine, some 63km north of Jerusalem. It is thought to be the largest organisation of its kind in the West Bank. 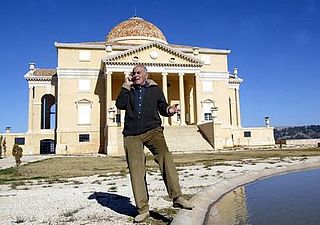 Munib Rashid al-Masri, also known as the "Duke of Nablus", and "the Godfather"(b. 1934), is a Palestinian industrialist, politician, and patriarch of the al-Masri family. al-Masri is widely described as the world's richest Palestinian, with personal holdings that reportedly account for a third of the Palestinian economy. 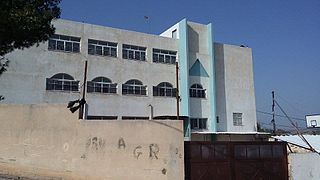 Kafr Sur is a Palestinian town in the Tulkarm Governorate in the eastern West Bank, located 12 kilometers Southeast of Tulkarm. According to the Palestinian Central Bureau of Statistics, Kafr Sur had a population of approximately 1,254 inhabitants in mid-year 2006. 13.5% of the population of Kafr Sur were refugees in 1997.

Balata al-Balad is a Palestinian suburb of Nablus, in the northern West Bank, located 1 kilometer (0.62 mi) east of the city center. Formerly its own village, it was annexed to the municipality of Nablus during Jordanian rule (1948–67).

Rawabi is the first planned city built for and by Palestinians in the West Bank, and is hailed as a "flagship Palestinian enterprise." Rawabi is located near Birzeit and Ramallah. The master plan envisages a high tech city with 6,000 housing units, housing a population of between 25,000 and 40,000 people, spread across six neighborhoods. Construction began in January 2010. By 2014, 650 family apartments housing an estimated 3,000 people had been completed and sold, but could not be occupied while negotiations over supplying the city with water stalled. The city remained without water; the delay was attributed to the Israeli–Palestinian Joint Water Committee, with Israelis blaming Palestinians for the delay and Palestinians blaming Israelis. On March 1, 2015, its developer, Bashar al-Masri, announced that Israel would finally connect the city up to the Israeli-controlled water grid. In Israel Rawabi is called "The Palestinian Modi'in." The project was criticized by both certain Palestinian movements, such as the Palestinian National BDS Committee, and some Israeli settler groups, the former claiming the use of Israeli materials normalizes the occupation, the latter asserting the project invades Israel and could become a terrorist base. Buyers started moving into apartments in August 2015. By May 2017, despite difficulties with flying Israeli checkpoints controlling the road to the city, 3,000 Palestinians had taken up residence there.

Events in the year 2002 in the Palestinian territories.

Markaz Shabab Balata is a Palestinian football team founded in 1954 and based in the Balata refugee camp in Nablus, that plays in the West Bank Premier League. It won promotion to the WBPL in 2010.

The Tamil Youth Organization (TYO) is an international organization with branches in the UK, Canada, Australia, France, Norway and several other nations. They organize cultural, sports events and also follows a Tamil nationalist approach and helped organize a referendum among the Tamil diaspora and support an independent Tamil Eelam.

Women on Walls is a public art project in Egypt aimed at empowering women through the use of street art, by encouraging the portrayal of strong Egyptian female figures in street art and empowering female street artists themselves to participate in the political space of graffiti. Building on the popularity of street art as a form of political expression during the January 25 revolution, the aim of this project is to increase awareness of women's issues by introducing women into public space. This project was co-founded by Mia Gröndahl, a Swedish street art documentarian, and Angie Balata, an Egyptian artist, in December 2012 with funding from the Danish Center for Culture and Development, and was launched with a month-long event in the Spring of 2013 in Cairo, Luxor, Alexandria, and Mansoura that included painting sessions, workshops, and lectures on topics ranging from art to women's issues more generally. The project held its second campaign in February 2014.

The Palestinian cabinet, headed by Prime Minister Rami Hamdallah, announced on 23 June 2016 a decision to hold municipal elections on 8 October 2016. The elections were suspended by the Palestinian Court in early September and in January 2017 they were set to 13 May 2017. They were expected to be the first elections in all of the Palestinian territories since Hamas' takeover of the Gaza Strip in 2007, as Hamas agreed to participate in the local elections and allow them to be held in the Gaza Strip but disagreements between Hamas and Fatah led to Hamas boycotting stating it will participate only after "ending disagreements, achieving reconciliation, and uniting Palestinian institutions, including at the political, judicial, and security levels". The elections were later slated to be held in West Bank in May 2017 and were postponed in Gaza Strip.