Tompkinsville is a populated place in Charles County, Maryland. It was the site of a post office. [1] William J. Frere lived there.

Charles County is a county located in the southern central portion of the U.S. state of Maryland. As of the 2010 census, the population was 146,551. The county seat is La Plata. The county was named for Charles Calvert (1637–1715), third Baron Baltimore.

Prince George's Plaza is a Washington Metro station in Hyattsville, Maryland, on the Green Line.

Millersville is an unincorporated community in Anne Arundel County, Maryland, United States. Population was 20,965 in 2015 based on American Community Survey data. 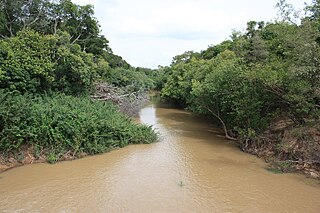 The Komoé River is a river in West Africa. The river originates on the Sikasso Plateau of Burkina Faso, flow through the Cascades de Karfiguéla, forms a short section of the border between Burkina Faso and Ivory Coast until it enters Ivory Coast, where it is the major drainage for northeastern portion of that country before emptying into the Atlantic. The banks of the Komoé are shaded by riparian forests along most of it length providing an important habitat for wildlife and a source of agricultural water. Where reliable floodplains form in Ivory Coast, rice may be grown. A portion of the river in northern Ivory Coast is the source of the vegetative richness that earned that area a UNESCO World Heritage Site designation, Comoé National Park.

Starlight is an unincorporated community in Wood Township, Clark County, Indiana, United States. Addresses in Starlight are listed as part of nearby Borden.

Barstow is a small, rural unincorporated community located at the crossroads of MD 231, German Chapel Road, and Barstow Road in Calvert County, Maryland immediately west of Prince Frederick. The community maintains its own separate zip code, 20610.

Loveville is an unincorporated community in St. Mary's County, Maryland, United States, named for A. Kingsley Love, an attorney. It is known for its Old Order Mennonite community who have a farmers' market/produce auction here, as well as craft shops and an annual quilt auction. Traditions of Loveville, an interior design and furniture store, occupies the Old Loveville Post Office Building. A Maryland Motor Vehicle Administration office is also here. The postal code for Loveville is 20656

Morganza is an unincorporated community in St. Mary's County, Maryland, United States. Today, it is home to a few homes and St. Joseph's Catholic Church, which had been in the area since 1759. The current church on Route 5 at the top of the hill was built in 1860 and the Morganza Post Office was established there in 1867, named after the Morgan family. The post office is now located across from Chopticon High School. Morganza was home to two public one-room school houses and the church opened a parochial school for white students in 1926 and for black children in 1927. These schools were begun by John LaFarge, S.J. He is noted for his many interracial writings and activities. He is quoted as having said that his ministry among both the white and Afro-American parishioners taught him about racial injustice. St. Joseph's original cemetery is located at the bottom of the hill along Route 5 and for many years was forgotten under dense underbrush, but has since been cleared. The current 4-acre (16,000 m2) cemetery across from St. Joseph's was purchased in 1904.

Fornis is an unincorporated community in El Dorado County, California. It is located 1.5 miles (2.4 km) southwest of Georgetown, at an elevation of 2379 feet.

St. George Island is an unincorporated community census-designated place in St. Mary's County, Maryland, United States. The post office at Piney Point, Maryland serves the island, which is connected to it by a short bridge. During the War of 1812 the British made the island their headquarters, and raided shipyards and river plantations from this base. Many tall pines on the island were cut and shipped to England for ship masts. In the 19th century the Roman Catholic Church, which owned the island, finally opened it to settlement, including some settlers who migrated from Smith Island.

American Revolution Statuary is a group of fourteen statues in Washington, D.C., listed with the National Register of Historic Places. The statues are scattered across Washington, mainly in squares and traffic circles, with four statues of European officers displayed in Lafayette Square, across from the White House

Liberty Square is a neighborhood in Baltimore, Maryland. African Americans make up the vast majority of residents.

Jollytown is an unincorporated community in Greene County, in the U.S. state of Pennsylvania.

Nebraska is a ghost town in Pickaway County, in the U.S. state of Ohio.

Oran is an unincorporated community in Shelby County, in the U.S. state of Ohio.

Whitmore is an unincorporated community in Sandusky County, in the U.S. state of Ohio.

Wolf is an unincorporated community in Tuscarawas County, in the U.S. state of Ohio. 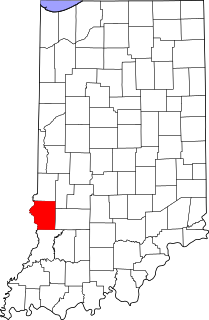 Farnsworth was a former town in Cass Township, Sullivan County, in the U.S. state of Indiana.

Hurry is an unincorporated community in St. Mary's County, Maryland.