The Tone Clock, and its related compositional theory Tone-Clock Theory, is a post-tonal music composition technique, developed by composers Peter Schat and Jenny McLeod. Music written using tone-clock theory features a high economy of musical intervals within a generally chromatic musical language. This is because tone-clock theory encourages the composer to generate all their harmonic and melodic material from a limited number of intervallic configurations (called 'Intervallic Prime Forms', or IPFs, in tone-clock terminology). Tone-clock theory is also concerned with the way that the three-note pitch-class sets (trichords or 'triads' in tone-clock terminology) can be shown to underlie larger sets, and considers these triads as a fundamental unit in the harmonic world of any piece. Because there are twelve possible triadic prime forms, Schat called them the 'hours', and imagined them arrayed in a clock face, with the smallest hour (012 or 1-1 in IPF notation) in the 1 o'clock position, and the largest hour (048 or 4-4 in IPF notation) in the 12 o'clock position. A notable feature of Tone-Clock Theory is 'tone-clock steering': transposing and/or inverting hours so that each note of the chromatic aggregate is generated once and once only.

While Tone-Clock Theory displays many similarities to Allen Forte's pitch-class set theory, it places greater emphasis on the creation of pitch 'fields' from multiple transpositions and inversions of a single set-class, while also aiming to complete all twelve pitch-classes (the 'chromatic aggregate') with minimal, if any, repetition of pitch-classes. While the emphasis of Tone-Clock Theory is on creating the chromatic aggregate, it is not a serial technique, as the ordering of pitch-classes is not important. Having said that, it bears a certain similarity to the technique of 'serial derivation', which was used by Anton Webern and Milton Babbitt amongst others, in which a row is constructed from only one or two set-classes. It also bears a similarity to Josef Hauer's system of 'tropes', albeit generalised to sets of any cardinality.

The term 'tone clock' (toonklok in Dutch) was originally coined by Dutch composer Peter Schat, in reference to a technique he had developed of creating twelve-note pitch 'fields' by transposing and inverting a trichord so that all twelve pitch-classes would be created once and once only. [1] Schat discovered that it was possible to achieve a trichordally partitioned aggregate from all twelve trichords, with the exception of the diminished triad (036 or 3-10 in Forte's pitch-class set theory). Schat called the 12 trichords the 'hours', and they became central to the harmonic organization in a number of his works. He created a 'zodiac' of the hours, which shows in graphical form the symmetrical patterns created by the tone-clock steerings of the hours. (Note that Hour X is substituted with its tetrachord, the diminished seventh, which can be tone-clock steered).

In her as-yet-unpublished monograph 'Chromatic Maps', New Zealand composer Jenny McLeod extended and expanded Schat's focus on trichords to encompass all 223 set-classes, thus becoming a true 'Tone-Clock Theory'. [2] She also introduced new terminology in order to 'simplify' the labelling and categorization of the set-classes, and to draw attention to the specific transpositional properties within a field.

The most succinct musical expression of the theory is in her 24 Tone Clock Pieces, written between 1988–2011. Each of these piano works explores different aspects of tone-clock theory.

The following terms are explained in McLeod's Chromatic Maps I:

New Zealand composer and music theorist Michael Norris has generalized the concept of 'tone-clock steering' into a theory of 'pitch-class tessellation', and has developed an algorithm that can provide tone-clock steerings in 24TET. He has also written about and analyzed Jenny McLeod's 'Tone Clock Pieces'. [3] [4]

This is an alphabetical index of articles related to music.

The twelve-tone technique—also known as dodecaphony, twelve-tone serialism, and twelve-note composition—is a method of musical composition first devised by Austrian composer Josef Matthias Hauer, who published his "law of the twelve tones" in 1919. In 1923, Arnold Schoenberg (1874–1951) developed his own, better-known version of 12-tone technique, which became associated with the "Second Viennese School" composers, who were the primary users of the technique in the first decades of its existence. The technique is a means of ensuring that all 12 notes of the chromatic scale are sounded as often as one another in a piece of music while preventing the emphasis of any one note through the use of tone rows, orderings of the 12 pitch classes. All 12 notes are thus given more or less equal importance, and the music avoids being in a key. Over time, the technique increased greatly in popularity and eventually became widely influential on 20th-century composers. Many important composers who had originally not subscribed to or even actively opposed the technique, such as Aaron Copland and Igor Stravinsky, eventually adopted it in their music. 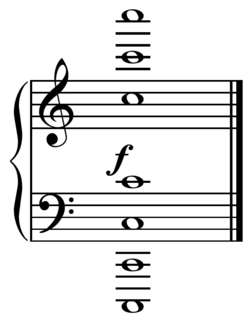 In music theory, a trichord is a group of three different pitch classes found within a larger group. A trichord is a contiguous three-note set from a musical scale or a twelve-tone row.

In music using the twelve tone technique, combinatoriality is a quality shared by twelve-tone tone rows whereby each section of a row and a proportionate number of its transformations combine to form aggregates. Much as the pitches of an aggregate created by a tone row do not need to occur simultaneously, the pitches of a combinatorially created aggregate need not occur simultaneously. Arnold Schoenberg, creator of the twelve-tone technique, often combined P-0/I-5 to create "two aggregates, between the first hexachords of each, and the second hexachords of each, respectively." 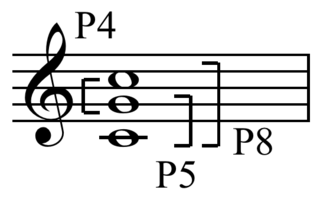 Genus is a term used in the Ancient Greek and Roman theory of music to describe certain classes of intonations of the two movable notes within a tetrachord. The tetrachordal system was inherited by the Latin medieval theory of scales and by the modal theory of Byzantine music; it may have been one source of the later theory of the jins of Arabic music. In addition, Aristoxenus calls some patterns of rhythm "genera". 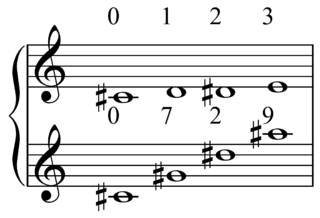 Jennifer Helen McLeod, is a composer and former Professor of Music at Victoria University of Wellington, New Zealand.

In music, the all-trichord hexachord is a unique hexachord that contains all twelve trichords, or from which all twelve possible trichords may be derived. The prime form of this set class is {012478} and its Forte number is 6-Z17. Its complement is 6-Z43 and they share the interval vector of <3,2,2,3,3,2>.