The Tonsley railway line is a suburban commuter line in Adelaide, South Australia that stems off the Seaford line at Mitchell Park to end opposite Science Park and close to the Flinders University and the Flinders Medical Centre. The line is single track for most of its length, from Celtic Avenue near Mitchell Park station to its terminus. Services operate every 30 minutes on weekdays with no trains operating at night or on the weekend unless there is a special event in town.[ vague ]

The Tonsley railway line was constructed as a branch line of the Seaford line between 1965 and 1966 to serve the new Chrysler plant at Clovelly Park. Construction of the plant had commenced in 1963, and the assembly line was opened in October 1964 (remaining operational until it was closed in March 2008). [1] Upon opening the Tonsley line serviced three stations - Mitchell Park, Clovelly Park, and Tonsley (closed 2019).

From 27 February 2012, the line between Woodlands Park and Tonsley was closed for construction. [2] [3] During this time the line was duplicated between Tonsley Junction and Mitchell Park station, the track re-sleepered with dual gauge sleepers to allow for the line to be converted to standard gauge at a future date, and the entire line electrified. [4] The closure (initially planned as one year) was extended until September 2013, for electrification of the line along with the Noarlunga Centre line. [5] In late 2013, a plan was announced to convert the line to a double-track railway. This was to be funded through joint State and Federal initiatives, but the incoming Federal government announced it would be changing their focus to roads, and cut funding. Accordingly, the future of the line was unclear, with $18 million spent on the project. [6] It eventually reopened on 5 May 2014, more than two years after closure. [4]

In July 2008, a feasibility study was commissioned by the government to extend the line to Flinders Medical Centre. [7] On the 13 May 2016, as part of the 2016 Liberal election campaign, a funding pledge of $43 million was announced for the plan. [8] The extension, referred to as the Flinders Link Project, would extend the line by 650 metres and replace the Tonsley station terminus on Sturt Road with a new terminus station adjacent to Flinders Medical Centre. An elevated single track with a pedestrian and bike path begins just north of the original Tonsley station site to cross Sturt Road, Laffer's Triangle and Main South Road, before terminating at Flinders station. [9] Clovelly Park station is also being rebuilt and renamed to Tonsley as part of the extension project. [10] [11]

The original Tonsley station was closed after the final service on 28 June 2019, allowing construction of the rail overpass on the station site; services currently terminate at Clovelly Park station until the extension is complete. [12] Built concurrently with the adjacent Darlington Upgrade for the Southern Expressway, [13] [14] major works commenced in July 2019, and was completed in October 2020, with a opening set for December 2020. [15] [16] [17]

Services operate between 6.30 AM and 7.30 PM on weekdays only. [18] Services were only extended to operate during weekday off-peak periods in 2004. Stations between Adelaide and Woodlands Park are also serviced by the Seaford line, and stations between Adelaide and Goodwood are also serviced by the Belair line. Prior to 2014, most trains were operated by 3000 class railcars augmented at times by 2000 class railcars. Following the electrification of the line, the latter were no longer authorised to operate on the line [19] and they were retired from service in 2015. The line is fully operated by A-City electric multiple units.

Weekend services are planned for the extension to Flinders. [20]

Tonsley railway station was located on the Tonsley line in the south-western Adelaide suburb of Mitchell Park. It was 13 kilometres from Adelaide station, and was the terminus of the line from its opening in 1966 until its closure in 2019.

Goodwood railway station is the junction station for the Belair and Seaford/Tonsley lines. The Belair line diverges south-east towards Millswood, while the Seaford and Tonsley lines diverge south-west towards Clarence Park. The Glenelg tram line crosses over the railway lines at the south end of Goodwood station. The station services the Adelaide inner-southern suburb of Goodwood, and is 5.0 km from Adelaide station. 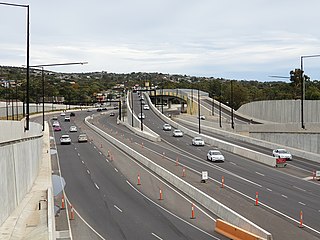 The Southern Expressway is an 18.5 km (11.5 mi) freeway in the southern suburbs of Adelaide, South Australia, between Bedford Park and Old Noarlunga. It is the southern part of the North–South Corridor which extends the full length of Adelaide and is being built to urban freeway standard.

TransAdelaide was a publicly owned corporation established on 4 July 1994 which provided suburban train, tram and bus services in Adelaide, South Australia, under contract to the Government of South Australia. It took over these responsibilities from the State Transport Authority.

The rail network in Adelaide, South Australia, consists of six lines and 89 stations, totalling 125.9 km. It is operated by Adelaide Metro, and is part of the citywide Adelaide Metro public transport system. 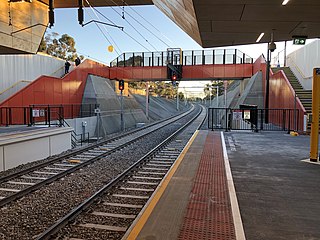 Oaklands railway station is located on the Seaford railway line in Adelaide, South Australia. It is in the south-western suburb of Oaklands Park, 13 kilometres from Adelaide station. 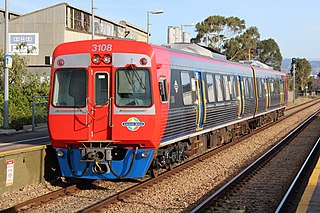 The 3000/3100 class are a class of diesel railcars operated by the State Transport Authority and its successors in Adelaide. They were built by Comeng and Clyde Engineering between 1987 and 1996 and are the workhorse of the non-electrified suburban rail network in Adelaide.

The Outer Harbor railway line is a suburban branch line in Adelaide, South Australia. It runs from Adelaide station through the north western suburbs to Port Adelaide and Outer Harbor. It is 21.9 kilometres in length, and shares part of its run with the Grange line. It is operated by Adelaide Metro.

The Gawler railway line is a suburban commuter railway line in the city of Adelaide, South Australia. It is the only rail route in Adelaide to have no interchange with another line at any station except Adelaide. 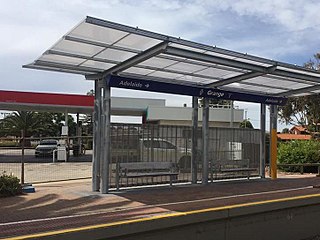 The Grange railway line is a suburban branch line in Adelaide, South Australia. 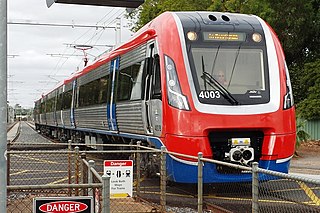 The Seaford railway line is a suburban commuter line in Adelaide, South Australia. 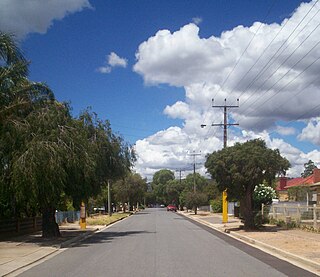 Clovelly Park is an inner southern suburb of Adelaide in the local government area of the City of Marion. Before becoming an 'advanced' suburb, it was a farm and vineyard. The suburb is bordered by Daws Road to the north, South Road to the east, Sturt Road to the south, and a combination of Percy Avenue and the Tonsley railway line to the west. It is situated approximately 20 minutes from the Adelaide city centre, and about 2 minutes from Flinders University, Flinders Medical Centre and Westfield Marion. 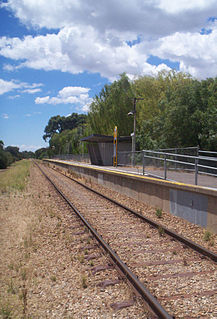 Clovelly Park railway station is located on the Tonsley line in the south-western Adelaide suburb of Mitchell Park.

Marino Rocks railway station is located on the Seaford line. Situated in the southern Adelaide suburb of Marino, it's 18.9 kilometres from Adelaide station and leads directly into Nimboya Road Reserve and park. In addition to serving the hillside Marino community, the station provides the rest of Adelaide with public transport access to a host of outdoor attractions and cycle routes within Marino's local reserves, conservation park and coastline. These are supported and promoted by DPTI and Marion Council visitor information signage on each platform. 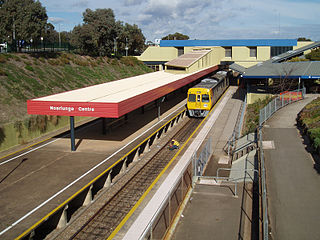 Noarlunga Centre Interchange is a railway station on the Seaford line, and for almost 36 years it was the terminus of the line. Situated in the southern Adelaide suburb of Noarlunga Centre, it is 30.2 kilometres from Adelaide station. The station has a bus interchange directly alongside and is adjacent to a large commuter park & ride facility.

Seaford Meadows railway station is located on the Seaford line. Situated in the southern Adelaide suburb of Seaford Meadows, it is 34.7 kilometres from Adelaide station.

Seaford railway station is the terminus of the Seaford line. Situated in the southern Adelaide suburb of Seaford, it is 35.9 kilometres from Adelaide station.

The Adelaide Metro A-City 4000 Class is a class of electric multiple unit trains built by Bombardier Transportation, Dandenong for the electrified Adelaide Metro rail network. This class were the first, and currently only, electric trains to have operated in South Australia.

Flinders railway station is under construction on the Tonsley line in the southern Adelaide suburb of Bedford Park. It will serve the adjacent Flinders Medical Centre precinct and will become the new terminus of the line.