Sir Thomas Anthony Cunningham DL (born 16 September 1952) is a British Labour Party politician who was the Member of Parliament (MP) for Workington from 2001 to 2015. Ed Miliband appointed him to replace Mark Lazarowicz as Shadow Minister for International Development. [1] [2] He was removed from the team in the October 2013 reshuffle. [3] In June 2014 Cunningham announced that he would not be standing again at the next election. [4]

Tony Cunningham was born in Workington and educated at the Workington Grammar School (which became Stainburn School in 1984) on Stainburn Road before attending the University of Liverpool where he received a BA degree in History and Politics in 1975, and the Didsbury College of Education, Manchester where he qualified as a teacher with a Postgraduate Certificate in Education in 1976. He began his teaching career at the Alsager Comprehensive School on Hassall Road in 1976 until 1980 when he taught at the Mikunguni Trade School in Zanzibar. He returned to Britain in 1983 to teach history at Netherhall School, Maryport on Netherhall Road in Maryport and he remained in post until his election to the European Parliament. For the duration of his teaching career he was a member of the National Union of Teachers, serving as a local secretary 1985–1994, and has been a member of the Amalgamated Engineering and Electrical Union since 1993. He was elected a councillor to the Allerdale District Council in 1987, and became the leader of the council in 1992, he stepped down from both the leadership and the council in 1994. He was the Mayor of Workington in 1990.

At the 1994 European Parliament election he became the MEP for Cumbria and Lancashire North, but was defeated in 1999. On leaving Strasbourg and Brussels in 1999 he became the Chief Executive of Human Rights NGO INDICT where he remained until his election to the House of Commons. At the 2001 general election, he became the MP for the safe Labour seat of Workington on the retirement of Dale Campbell-Savours. He was elected with a majority of 10,850 and remained the constituency's MP until 2015. He made his maiden speech on 13 July 2001.

In parliament, he was a member of the European Scrutiny Select Committee from 2001 until he was appointed as the Parliamentary Private Secretary to the Minister of State at the Department for Environment, Food and Rural Affairs Elliot Morley. He was promoted to serve in the Tony Blair government after the 2005 general election and was an Assistant Whip. Following Gordon Brown's October 2008 reshuffle, Cunningham was promoted from Assistant Whip to a Government Whip also known as a 'Lord Commissioner of HM Treasury', in which role he served until May 2010.[ citation needed ]

In 2013, he became one of the few Labour MPs to vote against the Marriage (Same Sex Couples) Bill, which eventually passed with cross-party support. [5]

Cunningham has been married to Anne Margaret Gilmore since 1984; he has a stepson, a stepdaughter, and a son and a daughter with his wife. Since 1994, he has been a patron of both Voluntary Service Overseas and the Mines Advisory Group. The constituency of Workington contains some of the Lake District, the lakes of Buttermere and Crummock Water as well as the former steel manufacturing town of Workington and the old docks of Maryport. It also includes Cockermouth, the birthplace of the romantic poet William Wordsworth.

Prior to the 2010 general election the constituency included Keswick. Cunningham is active in sports, he is a qualified rugby union coach and referee, and has played cricket and football, as well as rugby (both league and union) competitively. He played for the parliamentary football team, and he speaks some Swahili.

He was knighted in the 2012 Birthday Honours for public and political service, [6] and is a Deputy Lieutenant of Cumbria. [7] 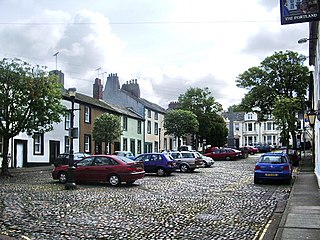 Workington is a coastal town and civil parish at the mouth of the River Derwent on the west coast of Cumbria, England, historically in Cumberland. At the 2011 Census it had a population of 25,207. 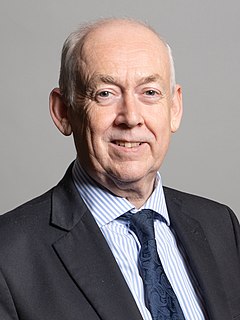 Wayne David MP is a British Labour Party politician, who has been the Member of Parliament (MP) for Caerphilly since 2001. He was Parliamentary Under-Secretary of State at the Wales Office from 2008 to 2010. He was appointed Shadow Europe Minister in 2010, Shadow Minister for Political and Constitutional Reform in 2011 and as Ed Miliband's Parliamentary Private Secretary in October 2013.

Ian Colin Lucas is a British Labour Party politician, who was the Member of Parliament (MP) for Wrexham, Wales from 2001 to 2019. He was Parliamentary Under Secretary of State for Business and Regulatory Reform in the Department for Business, Innovation and Skills from 2009 until Labour's defeat at the 2010 General Election. 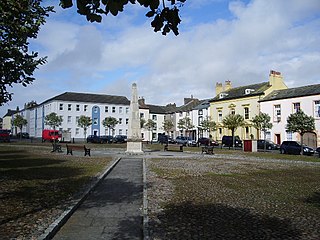 Maryport is a town and civil parish in the Allerdale borough of Cumbria, England, historically in Cumberland. 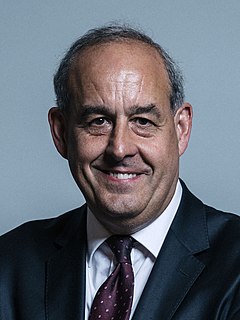 David George Hanson is a British Labour Party politician serving as Member of Parliament (MP) for Delyn from 1992 until 2019. He was the Minister of State for Security, Counter-Terrorism, Crime and Policing from 2009 to 2010. Hanson served as Shadow Treasury Minister from 2010 to 2011 and Shadow Minister of State for Immigration from 2011 to 2015. 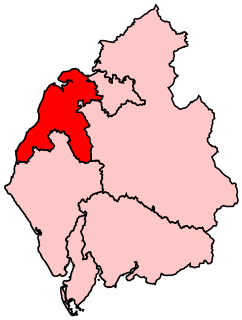 Workington is a constituency represented in the House of Commons of the UK Parliament since 2019 by Mark Jenkinson, a Conservative. 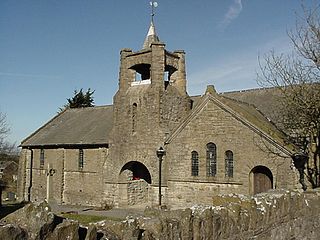 Broughton Moor is a village and civil parish in the Borough of Allerdale in Cumbria, England. It is situated on an extensive moor about 2 miles (3.2 km) north of Broughton, 5 miles (8.0 km) north west of Cockermouth, 2.5 miles (4.0 km) south of Maryport and 4.5 miles (7.2 km) north of Workington.

Crosby is a small village in Cumbria, England, 3 miles (4.8 km) north-east of Maryport on the A596 road. It has a population of approximately 1,000. The local primary school is Crosscanonby St. John's Church of England School. 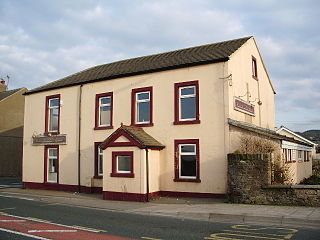 Flimby is an English coastal village in the Borough of Allerdale in Cumbria. It was historically in Cumberland. It currently forms part of the civil parish of Maryport and the Flimby ward of Allerdale Council. It is included in the Maryport South county division of Cumbria County Council. 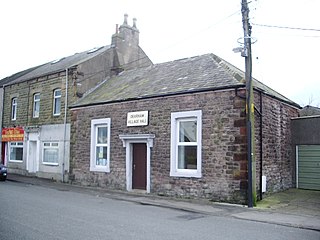 Dearham is a village and civil parish in the Allerdale district of Cumbria, historically part of Cumberland, near the Lake District National Park in England. It lies about 2 miles (3.2 km) east of Maryport and 5 miles (8.0 km) west of Cockermouth.

The Workington by-election, 1976 was a parliamentary by-election held in England for the House of Commons constituency of Workington in Cumbria on 4 November 1976. It was won by the Conservative Party candidate Richard Page, who became the first non-Labour MP in the constituency’s history. 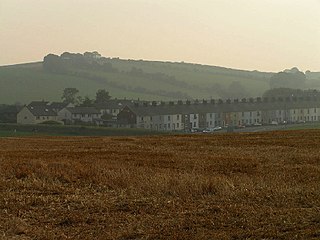 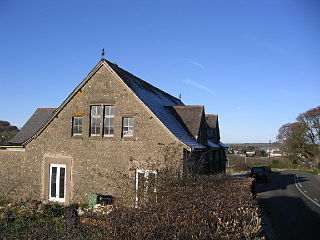 Great Clifton is a village and civil parish in the Borough of Allerdale in the English county of Cumbria. In the 2001 census, it has a population of 1,101, increasing slightly to 1,114 at the 2011 Census. The River Derwent is roughly 1 mile (2 km) north of Great Clifton.

Alexander Cunningham is a British Labour Party politician. He was elected at the 2010 general election as the Member of Parliament (MP) for Stockton North. He is a currently the Shadow Minister for Courts and Sentencing. 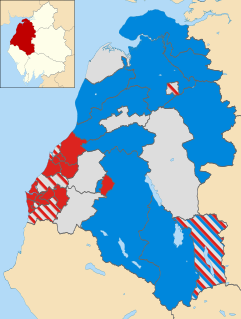 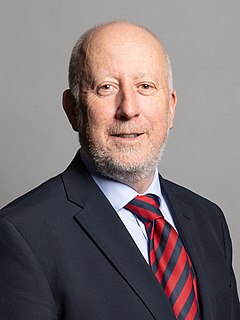 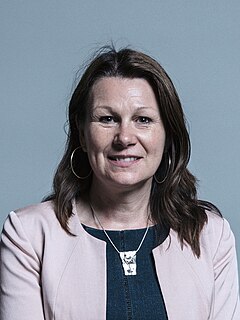 Susan Mary Hayman is a British Labour Party politician who served as Shadow Environment Secretary from 2017 to 2019, and as Member of Parliament (MP) for Workington from 2015 to 2019. Prior to her parliamentary career she was a public relations consultant, and local councillor. 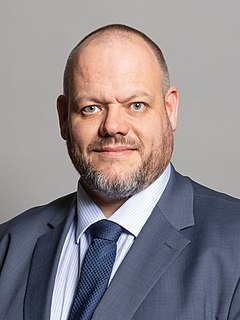 Mark Ian Jenkinson is a British Conservative Party politician serving as the Member of Parliament (MP) for Workington since 2019, defeating Shadow Environment Secretary Sue Hayman by a margin of 4,136 votes. Until the December 2019 general election, the Labour Party had won the seat in every general election since 1979.The Conservative Party had only been elected once in Workington since World War 2, at the 1976 by-election. Jenkinson ran as the UKIP candidate for Workington in 2015.